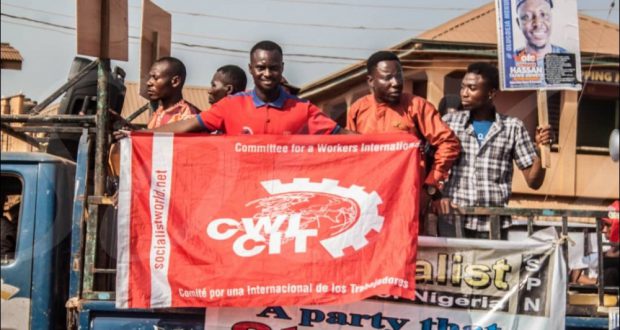 Nigeria has been named as the world’s “poverty capital” in 2018. The country has over 80 million extremely poor. In February next year there are elections, in which for the first time, the Socialist Party of Nigeria will be standing candidates. We spoke to Dagga Tolar from Democratic Socialist Movement (our sister organisation in Nigeria).
Also read a report on the election on the website of the Committee for a Workers International, the international socialist organisation to which the Socialist Party in Ireland is affiliated:
http://socialistworld.net/index.php/international/africa/nigeria/10064-nigeria-elections-main-parties-offer-no-alternative
“In the last elections, 2015, Muhammadu Buhari was elected president, on promises of change, to stop corruption and increase living standards. He also promised to stop the right-wing Islamist Boko Haram’s terror.
“But none of this has been carried out, since Buhari’s politics does not challenge the capitalist system. When oil prices fell, the country collapsed into recession. 271 factories have been closed down under Buhari, many in the textile industry. Unemployment is increasing, as are prices and poverty.
“Since 2011, the minimum wage has been 18,000 Naira per month. That is $49, which is under the UN’s extreme poverty measure, $2 a day, $60 a month. But even this minimum wage is not paid. The majority of the country’s 36 states are lagging behind this minimum wage rate.
“Nigeria is the world’s “poverty capital”. Nearly 87 million people, around half the population, live on less than $2 a day, more than in India. This extreme poverty should be compared with the society’s elite – a senator in parliament earns equivalent of $183,000 a month! The depth of the social crisis is also shown by the infant and mothers mortality rates which are the second highest in the world. Nigeria also has the highest number of children who do not attend school – 13.2 million.”

“After five quarters of negative growth, the economy began to grow again last quarter 2017 by 0.7 percent. It is expected to record an annual growth rate of 1.9 percent this year.. It is well below the population increase, so GDP (whole economy) per capita continues to decline. However, even when the GDP per capita was on the rise before the slump in oil revenue in mid 2014 , the poverty rate was also the rise. This shows a very wide income inequality gap in Nigeria.
“Buhari’s government has tried to keep the economy going by increasing spending. But even these projects are a drop in the ocean, most favouring multinational construction companies. Expenditure has been financed by loans, which has caused the central government debt to increase sharply. Today, half of the revenue goes to pay the debts.
“Since oil prices have fallen, from $86 a barrel at the end of September to under $60 in December, government revenue has fallen. The country’s working population will receive even heavier burdens.
“Buhari has also not delivered peace. Earlier this year he proclaimed Boko Haram had been defeated. But only in recent weeks, more than 100 people have been killed in attacks by them.
“The violence has also increased in central parts of the country, in conflicts between shepherds and peasants. Escalated violence is caused by drought and desertification. The shepherds take care of cattle owned by wealthy families, who arm them to take over land.  Many farmers and shepherds have died in the conflict. The state has done very little to end these conflicts.
Democratic Socialist Movement (CWI in Nigeria) stands for a socialist agricultural program, with massive government investment under democratic control.”

“The disappointment and dissatisfaction with Buhari’s government has led to increased protests and struggles. Hard battles are ongoing against the electricity companies’ “crazy bills”, where households are forced to pay, but no electricity is delivered. Electricity companies and grids were privatised five years ago, with promises to increase accessibility and lower prices.
“But still it’s most common to only have electricity for 2-3 hours a day. In residential areas, fighting, often led by women, is organised against paying for darkness. The bills can be as high as 10,000 naira a month, i.e., more than half the minimum wage.
“The CWI in Nigeria and the Socialist Party of Nigeria (SPN) participate in these campaigns and demand renationalisation of electricity companies and grids.
“2018 has also seen an increase in strikes and labour struggles, the main force to win in struggles against government and big business. In September, a three-day warning strike was organised by the three trade unions federations, the Nigeria Labor Congress (NLC), the Trade Union Congress (TUC) and the United Labor Congress (ULC). Their demand was for an increase in the minimum wage to 65,000 Naira per month (just over $178).
“As the government did not meet their demands, a new strike was announced for November 5th. For this, preparations were the most comprehensive since the great General Strike in 2012. On October 30, rallies were held to mobilise for the strike. For example, worker activists in the airport slept there in order to start the strike right away.
“The government felt the pressure and began negotiations with the trade unions. After 11 hours, an agreement was reached that would give 30,000 Naira. The union leaders called off the strike, but the anger and pressure from amongst the ranks was shown when many workers still went on strike that day.
“The state governors immediately declared that they could not afford the new minimum wage. It shows that continued united and extended battles will be necessary to force through the increase. There is no doubt that the state could afford the rise, even with an increase to the original demand of 65,000 Naira, and also be able to pay for the upgrading of schools, healthcare and infrastructure such as roads and electricity.
“DSM and SPN participate fully in the trade unions and strikes. This also applies locally, where workers at the Summal company in Ibadan won huge concessions after three days of struggle led by DSM members.
Students in the Educations Rights Campaign, led by DSM members, in December actively supported the university lecturer’s strike, which has lasted over a month. Their demands are over both wages and increased resources for education. The ERC has also won the reinstatement of Omole Ibukun at OAU University, where he had been suspended after organising struggle for better conditions.
“One problem for the struggle is the unwillingness of union leaders to organise real struggles and the fact that the unions have few members in many workplaces.”

SPN and the elections

“After three years of struggle – in courts and political protests – the Socialist Party of Nigeria was finally officially registered at the beginning of the year. The SPN will stand 20 candidates in the election: Governor elections in Oyo, eleven constituencies in Lagos, Oyo, Osun, Ogun and Cross Rivers, plus eight different areas in the capital Abuja.
“SPN is still a new party with limited resources, and therefore does not yet stand in the presidential elections. In the first election the party stood, for Governor in Osun, SPN got modest 391 votes. However, it was more than the  better known Labour Party, which has been around since 2007. The SPN election campaign’s socialist message reached most communities.
This is the first time that CWI members can stand with our own program and own party names. Just over 10 years ago, CWI members successfully stood as candidates for the National Conscience Party.
“If the SPN were to get someone elected, it would mean a new step forward in the class struggle. But the goal is not only to win positions, which is very difficult, but spreading socialist ideas and mobilising workers and the oppressed around such a program for political power and to establish a democratic socialist society.
“The elections in Nigeria are more or less rigged. The two dominant parties, APC to which Buhari belongs and PDP who had the president’s post prior to him, are out bidding each other by distributing money and gifts to voters. Politicians also move regularly between both parties.
“Our candidates are standing to represent workers, young people and students, and promise to live on the average public sector workers’ wage.
“SPN is a broader party with a clear socialist program. It is founded by DSM, that is a revolutionary Marxist organisation and section of CWI. We are building both.
“At the last NC meeting of the DSM, a 280,000 Naira was donated for the election campaign.”
After the election, the situation will be tense, no matter who becomes president. The economic crisis gives little room for a government that obeys the rules of the capitalist market. The most likely perspective is that new attacks will take place and there will be no relief for those existing in absolute poverty.
“Our perspective is that the struggle from below will increase. After the elections will come a time of struggle.” 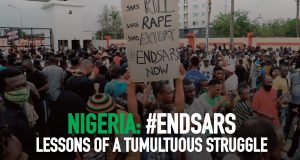