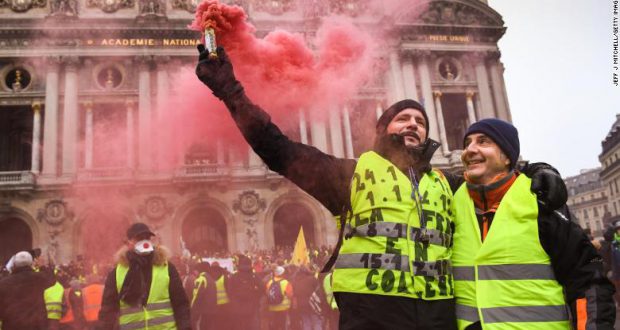 By Eljeer Hawkins, Socialist Alternative (sister organisation of the Socialist Party in the US)

“Yellow Vests” (“Gilets Jaune” named after roadside-safety vests) are a mass popular movement against the current establishment. It is a revolt that has been simmering in France for years. A revolt by ordinary people against the current political system…”- Pamela Anderson, Actress and Activist, 12/4/18.

The rise of Gilets Jaune “Yellow Vests” on November 17 takes place during the 50th anniversary of the May-June 1968 10 million strong French general strike that forced authoritarian President General Charles de Gaulle to flee the country. That indefinite general strike by the French working class and youth posed the possibility of a revolutionary change in society. This is only one high point of the French working class’  rich history of social struggle and movements.

The Yellow Vests movement began with President Emmanuel Macron proposing a fuel tax on diesel and gasoline. Macron used the argument that the tax would begin turning France into a green economy and cut gas emissions. The fuel tax was correctly viewed by the workers and large sections of the middle-class from rural areas which rely heavily on cars to get to and from work as an attack on their living standards, saddling them with more burdens instead of taxing the real polluters: French big business.

The Macron government has introduced massive cuts to social and public spending, assaults on education, pension reform and tax breaks for the wealthy. Macron’s “environmental tax” was the straw that broke the camel’s back, starting on social media as a petition that turned into four weeks of intense protest and social struggle on the streets of France. The Yellow Vests movement is indeed a movement of everyone, from school students and factory workers to secretaries rejecting the opulence of the rich and powerful as working people and the poor struggle to live a dignified life under low wages and horrific social conditions.

“Of course it’s not enough!”

The movement has caused a significant crisis for Macron and the political establishment of France. Macron’s image as an “outsider” to the traditional parties of French big business has shattered under the weight of this movement. So has the idea relentlessly promoted by the corporate media that he is the upholder of “liberal” ideas and a new standard bearer of continental European capitalism.

The early response by the establishment was to dig in their heels, using state repression and mass arrests to put an end to the movement. But the sheer popularity of the movement, with a 72% approval rating and rapidly spreading across France, into nearby Belgium and even globally, forced a change of approach. By the fourth week the movement produced a list of demands, including a 40% increase to the minimum wage, pensions, and benefits, a mass public jobs program, the construction of 50 million additional homes, leaving the EU in order to end the privatization of industries, and Macron’s resignation. Macron, increasingly worried about the stability of his government, agreed to cancel the fuel tax.

But the protests continued. On the evening of December 10, Macron addressed the nation in an attempted “I feel your pain” moment, putting forward concessions that he hoped will bring the protests to an end. Macron says he will introduce a $113 (7%) monthly increase for minimum wage workers, an exemption from taxes on overtime pay, an exemption on certain social security taxes for retirees who earn less than $2,265, a month, a revision of taxes on pensions, and a Christmas bonus to workers if their employers can afford it. There was no mention of ending the tax breaks to the rich. A Yellow Vest representative, Laetitia DeWalle, exclaimed on the main state TV channel France2 after  Macron’s address, “Of course it’s not enough !…he’s been absent from view for ten days, it was obviously to take acting lessons.”

What was striking about the pre-recorded televised address was Macron’s choice of scenery, the opulent Elysee Palace, a target of the mass rage of the movement. Macon’s message and proposals fell flat. The Yellow Vest movement is calling for more protest this upcoming weekend.

Pillars of the European Union in Crisis

The crisis in France coincides with the end of Angela Merkel’s reign as Germany’s Prime Minister. British Prime Minister Theresa May’s Brexit proposal is falling apart, which could lead to early elections in Britain. Out of movements like the Yellow Vests struggle, a challenge to the rule of the billionaire class could quickly emerge across Europe. The urgent tasks are building a sustained  movement and new parties of the working class. The rise of right-wing and nationalist forces in several countries show the potential dangers of the left not taking the steps needed.
Which Way Forward for the Yellow Vests Movement

Some in the liberal establishment and on the left have criticized the Yellow Vests movement for their demand to end the fuel tax with no concern for the environment and for the perception this is a primarily a “middle-class movement.” This dismissal of the movement’s social composition and demands is a political mistake. Occupy Wall Street in 2011 had its weaknesses but was the first significant left wing revolt against the economic collapse of 2007-08 and the bailout of Wall Street that sparked a global resistance.

The Yellow Vests movement is in its embryonic stage of development. This new expression of righteous anger shows deeper sections of the population moving into social struggle, some for the first time, against the super rich, oligarchs and their representatives like Macron.

The active role of the working class and organized labor is paramount in this situation.

The largest French trade union federation, CGT, called for buildup strikes and actions four weeks after the protest began. Socialist Alternative’s sister organization, Gauche Revolutionnaire are active participants in the movement and have a special issue of their paper Egalite which calls for a one-day general strike as the next step to mobilize towards bringing down the Macron government.

Marine Le Pen of the far-right National Front who lost to Macron in the general election last May has attempted to take advantage of the protest and mass anger, demagogically blaming immigration and launching a nationalist attack on globalization for causing the crisis. The overall mood, sentiment, and demands of the movement have pushed back on Le Pen’s rhetoric.

Jean-Luc Melenchon, leader of France Insoumise (France Unbowed) and the left candidate who got over 7 million votes in the first round of the last presidential election, called for protesters to converge in Paris and other cities for ‘Act 5’ of the Saturday demonstrations. He speaks of a continuation of the “Citizens’ Revolution” and the creation of a Constituent Assembly but makes no concrete proposals for organizing a movement to carry it through. Clare Doyle of the CWI challenges Melenchon’s proposal for a Constituent Assembly, stating; “Why not make it an assembly of revolt, with democratically elected representatives, at all levels, including from assemblies in the workplaces , offices, schools, local neighborhoods, and factories?”- France in Revolt, 12/11/18

Gauche Revolutionnaire’s program speaks to what is needed now to take the movement forward: “The French movement needs to link the immediate struggle for a minimum wage, the reinstatement of the taxes on the super-rich, an injection of billions into education, health and the environment with the struggle for socialism. This entails striving for a society that is “planned democratically and ecologically to satisfy the needs of all and not the profits of the handful of super-rich…a truly democratic, fraternal and tolerant society, free of wars, poverty, racism, and sexism.”