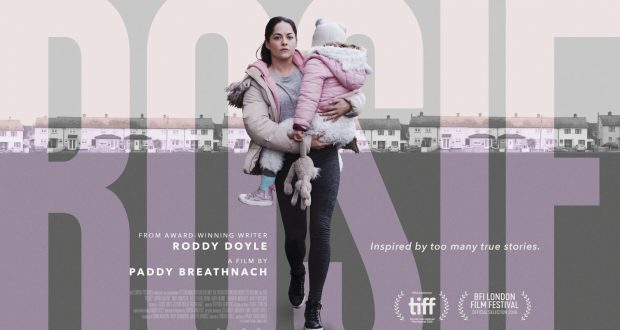 The housing crisis in Ireland today has created an increasing precarity for an entire generation. The Fine Gael government has presided over the normalisation of sky rocketing rents, slum landlordism, young people locked out of the housing market, people sleeping rough on the street with emergency accommodation services at breaking point, and, as poignantly depicted in this film, Rosie, families forced to sleep in their car. Penned by renowned author Roddy Doyle and directed by Paddy Breathnach, this film spans 36 hours in the life of a young family at the sharp edge of the housing crisis after they are evicted by their landlord.

Rosie tells a story which is an all too common reality in the lives of a relatively small but shamefully growing number of working-class people in Ireland today. Forced to move from hotel to hotel with four children in tow, Sarah Greene’s Rosie is an unflinching and powerful portrait of a mother pushed to her limits, yet still an anchor of the family. Crammed into a car with four children, each day spent searching for emergency accommodation, or simply a place to feel safe, the claustrophobia and panic the film captures is palpable and difficult to watch at times.

While her partner John Paul works full time in the service industry, this isn’t enough to provide for a family against the backdrop of the brutal Dublin housing market. Tensions reach breaking point when the eldest child, Kayleigh disappears after school, spiralling the already strained, tense atmosphere of the film into daunting disarray. The performances from the children (from an angry teenager to a younger child bullied at school) are portrayed will striking authenticity and skill.

However, it is Greene’s performance that steals the show. Her relentless and agonizing search for “someplace safe” for her family is interspersed with the everyday affection and joy of family life. Rosie is heartbreaking in its realism: the repetitive phone calls searching for somewhere, anywhere, just for the night, the belongings packed in plastic bags, the youngest child’s beloved toy rabbit and even the shaky camera shots inside the car, giving the viewer the feeling they are right there themselves.

Rosie is a film that puts the urgency of the housing crisis in sharp focus. The deeply harrowing, yet sadly routine situation that the film portrays leaves the viewer wondering if there are any solutions. The emergence of the Take Back The City movement, in which activists have occupied vacant properties (often the property of slum landlords) has highlighted the disgraceful fact that people are sleeping rough or in hubs or hotels when houses lie vacant. The success of the Raise The Roof protest on 3 October has also demonstrated that after the water charges movement and the repeal the eighth movement, a generation of young people have been politicised around issues of social injustice, and are looking for solutions to the depravity of the capitalist system as it exists in Ireland today.

The recent budget, and its’ failures to alleviate the problems ordinary people face has indicated once again that the current Fine Gael government (a third of these TDs being landlords) are unwilling to take the radical action needed to solve the housing crisis. As a result, it is vital that working and young people join an anti capitalist and socialist struggle to demand that housing be a right, not a privilege.

While the housing crisis is a pressing issue in Ireland today, and there is a general awareness about the statistics on homelessness (with the number currently at 10,000),  Rosie humanises this topic, and puts a human face on the crisis. Especially given the conscious attempts to vilify the most vulnerable in society (such as Varadkar’s comments about ‘welfare cheats’ or Conor Skeehan’s assertions that people in emergency accommodation are ‘gaming the system’), Rosie is an important film which drives home the horrendous nature of neo-liberal capitalism as it exists today.

In short, Rosie is a timely and salient film which casts light on the reality of the housing crisis. Outstanding performances from the small cast carry the film which is gripping and tragic to its very core. Rosie is not just a superb piece of cinema, but a rallying cry to action to all those searching for an alternative to the brutality of the housing crisis. Writer Roddy Doyle commented that he would ‘much rather the story wasn’t there’.

For anyone that this rings true for, it is vital to engage in a struggle that cuts across the logic of the capitalist market and eliminates the profit motive from housing. The recent explosions in the Take Back the City movement, such as occupying O’Connell bridge, are a small indication of the power of grassroots movements and their power in bringing about radical change to end the housing crisis and the misery it breeds, as poignantly portrayed in this not to be missed film.