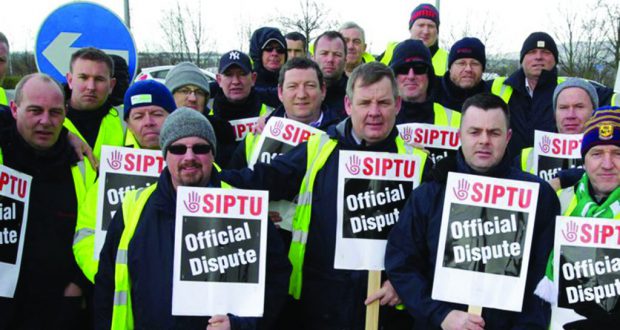 Project fear and Brexit: How should trade unions should respond?

The trade union movement, which claims 800,000 members north and south have a responsibility to oppose any aspect of a Brexit deal which is not in the interests of their members. For example, the Central Bank has warned of potential of 20,000 job losses in the South.

In the North, various figures point toward a serious recession.  Big business is preparing to use a Tory Brexit to implement “shock and awe” style attacks on workers’ rights, particularly on sectors such as Agri-business that are reliant on exports to Britain.

The nature of the EU

Trade unionists should have no trust in any capitalist politicians at the negotiating table, whether from the North, South, Britain or the EU. Unfortunately, the approach of many trade union leaders is to perpetuate the myth that important workers’ rights were handed down by a benevolent EU.  This turns reality on its head.

The European Union has been central to waging a war on workers, particularly given its role in Troika austerity programmes. The truth is that workers fought for these rights. For example, this year marks the 50th anniversary of the Ford workers’ strike in Dagenham, which was central to forcing the then British government to concede equal pay.

In Britain, some trade union leaders have attempted to align the TUC with the idea of a “peoples’ vote”.  A principled approach from the trade unions would instead be to demand and organise mass mobilisation for a general election – in order to take down the Tories and elect a Corbyn led-government.

In Ireland, trade unions should now put the bosses on warning that they will resist attacks on their members.  A starting point would be to organise a conference of workers’ representatives from Britain and Ireland to discuss what coordinated action can be taken and built for against attacks on pay and conditions or shedding of jobs flowing from Brexit. If someone has to take a hit- it, should be the profits of the capitalists.

The movement must also be clear in taking up the other central issues linked with Brexit. That means a clear stand of defending immigrants. Trade unions as force that unites workers in Northern Ireland has a role to play in resisting any hardening of the border or any border on the Irish Sea. It also has a key role to play in opposing those political forces who will use Brexit in order to push their sectarian agenda.