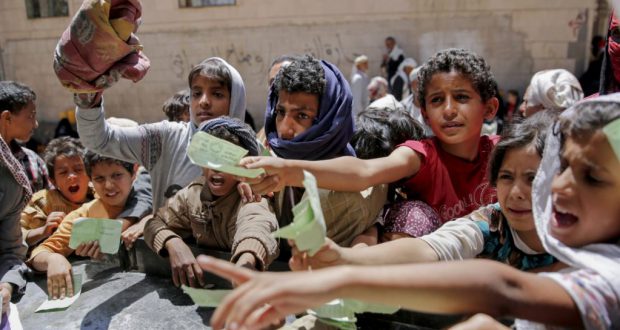 Yemen is undergoing a major humanitarian catastrophe. Already the poorest country on the Arabian Peninsula prior to civil war, it is now experiencing famine. The UN estimates that 18 million of Yemen’s 27 million people are food insecure. 1.8 million children are malnourished and the threat of cholera is widespread.  A massive devaluation in the Yemeni currency (the Rial) in September accelerated the crisis.

The Yemeni Civil War began with a Saudi Arabia and United Arab Emirates (UAE) led attempt to reinstall the short-lived presidency of Abd-Rabbuh Mansour Hadi in March 2015. Hadi had been removed by an alliance of supporters of his predecessor Ali Abdullah Saleh and the Shia Houthi movement.

This alliance has poured around $100 billion (and counting) into its objective to wrest control of the capital Sana’a and the densely populated majority Shia areas from the Houthis. Its blockade has failed to assist in meeting any of its military objectives and instead has caused famine. The outbreak of cholera, too, is a direct result of the Saudi targeting of water supplies.

That it has done so with the material and logistical help of several Western powers should come as no surprise. The House of Saud rose to prominence as an instrument of British Imperialism and then was inherited as a de facto colony of the United States as Britain declined.

The Saudi army is dominated by American advisors, largely because the leaders of the ruling House of Saud don’t trust other members of the House not to plot against them. The UK sold at least (but probably more) £45 million worth of arms to Saudi Arabia last year. This is a drop in the bucket compared to $110 billion arms deal the US agreed to with the Saudis last year.

The attempt to sell Muhammed Bin Salman (the Saudi Crown prince) as a dynamic reformer who would change the face of the region and usher in a new era of progress may have been lucrative for media companies and establishment think tanks, but it doesn’t have much basis in fact. The brutal murder of Washington Post columnist Jamal Khassoggi in the Saudi consulate in Istanbul is just the latest and most publicised of a series of erratic maneuvers linked to the 33 year-old Crown Prince.

Yemen has been brought to the brink of starvation by the Saudi led coalition. This exposes everything that is rotten about the oppressive and corrupt capitalist regimes that dominate this region. It also poses the necessity for a revolutionary socialist challenge to Saudi rule by the working class and poor.