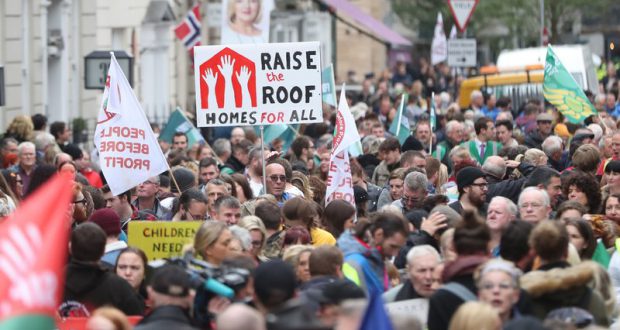 Enough is enough: Mass movement needed to win housing for all

“The Land Development Agency is a Government intervention that is 50 years overdue and which, in time, I believe will be seen to be as significant as the decision to establish the ESB, Aer Lingus or the IDA.”

These are the words of Leo Varadkar announcing the launch of the Land Development Agency. It is a fitting epitaph, given that all the main semi-state agencies were fattened up and sold off to private interests. That is the essence of what the LDA is – handing up to 70% of state-owned land over to private interests. But it is also a call to action for all those who are shocked and disgusted at the ever-growing humanitarian disaster of the housing crisis.

The government is not reckoning with the emergence of the social movement around Take Back the City and Raise the Roof. The occupations across Dublin City, the mass ‘Raise the Roof’ demonstration on 3 October, with thousands of students leaving college and workers leaving their workplaces to join the rally, all demonstrate a huge potential to build a movement.

Ireland has always had a housing crisis, but it has been the scale of this most recent crisis that re-emerged five years ago that has fuelled the growing anger in this moment. Virtually every family in Ireland has been affected in some way. What is more, it is a microcosm of the so-called recovery – a bonanza for the elites and a precarious existence for hundreds of thousands.

Repeal was a movement whose time had come. The result showed the scale of sweeping change in social opinions. But it was a result that had to be fought for inch by inch with a political establishment resistent to progress. If we want to tackle the housing crisis, we need a similarly determined and active campaign to force real change.

The Socialist Party supports the occupation movement and salutes the activists that have taken part, many involved in their first campaign, and many more having come from the repeal movement. Those actions need to be emulated across the country.

But this work needs to be broadened still further. The Socialsit Party is calling on the students’ unions across the state to call a national day of action; staging occupations, demonsrations and walkouts in all third level institutions.

Similarly the trade unions, with their 750,000 members need to be mobilised. Not just naming the day for a national demonstration, but actively going into the workplaces and mobilising their members. The unions should also seek to organise the unorganised, the tens of thousands of young people scraping a living in precarious jobs with no prospect of a future. If they seriously tried to unionise these workers and link their struggle to the struggle for a state-led solution to the housing crisis, they would get an electric response.

As we go to press, discussions of a major demonstration on 1 December are advancing. Everyone should get behind this demo and as a step to building a mass movement of resistance to this government of landlords and developers.