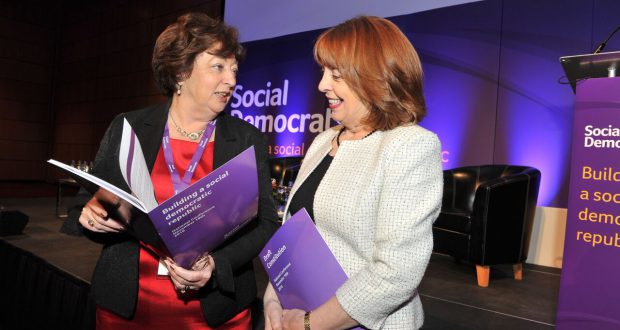 The last decade has seen convulsive change in Ireland. From 2008 onwards, we witnessed a devastating economic crisis and an eight year regime of austerity. This was followed by a neoliberal recovery where lack of affordable housing and childcare, underfunded social services and growing precarity in the workplace have become the norm. This is “capitalist realism”, Irish style.

We have also seen important social movements on the part of workers, women, young and LGBTQ people; notably the successful mass movements against water charges and the historic referendums that delivered marriage equality and abortion rights. It is also in this context that the combined support for the three main parties of Irish capitalism, namely Fianna Fáil, Fine Gael and Labour, has declined to

What is “social democracy”?

One political party that has sought to tap into the growing vacuum in Irish politics in the last number of years, particularly with the demise of Labour, has been the Social Democrats. One of its two TDs and co-leader, Roisin Shorthall, and many of its councillors and active members, are former members of the Labour Party – people who belatedly left the party during its time in government from 2011 to 2016.

The concept of “social democracy” has meant different things, at different stages of history. For most of the 20th century, the main social democratic parties in Europe were parties of the working class – with left-wing programmes that in theory sought to gradually ‘reform’ the system out of existence – but with pro-capitalist leaderships that invariably dispensed with that progragramme in practice. However, in the early 1990s, parties such as Labour in Ireland finally ditched the pretense of supporting socialism and fully embraced the brutal logic of neoliberal capitalism.

Notwithstanding their vague utterances about aims to “reshape Ireland, for the people”, it is clear that the Social Democrats haven’t fallen far from the Labour Party tree. They also believe that “there is no alternative”, to use Thatcher’s words, to capitalism in Ireland today. They support Ireland being a low tax economy for big business. They talk of promoting “Irish enterprises” such as capitalist entities like Glanbia. Rather than breaking with the draconian fiscal rules of the EU, which severely limit public expenditure, they merely wish to “challenge” them.

In short, they stand for policies that represent “old wine” in the broken bottle of a capitalist system that is systemically failing to meet the needs of working-class people. A programme that accepts this economic staus-quo – where wealth is owned and controlled by a tiny minority and profit always comes first – simply cannot deliver things like decent public housing and a national health service, which the Social Democrats say they stand for.

Nor can any even limited “social democratic” programme be implemented through coalition deals with the establishment parties, which the Social Democrats have their sights on (they will “talk to anybody”, according to Shorthall, about forming a government).

Despite their attempt to promote a progressive image, their actual conservatism can be seen on the issue which they have recently tried most to associate with, i.e. abortion rights. In the run up to May’s referendum, they sought to garner support amongst young people radicalised by the movement for bodily autonomy by being prominently active in local repeal campaigns.

However, the Social Democrats were only willing to advocate for legislation for the right to choose in the aftermath of the recommendations of the Citizens’ Assembly, in April last year, clearly sensing how that the mood on this issue had changed in society. Like the traditional parties of the capitalist establishment, and Sinn Féin, they tail-ended the active movement for equality and choice.

But such moevments are what deliver change and such movements – of workers, women, LGBTQ and young people – should have their own political expression: in a mass left-wing, anti-capitalist party with real socialist policies. A Labour mark two is the last thing we need.