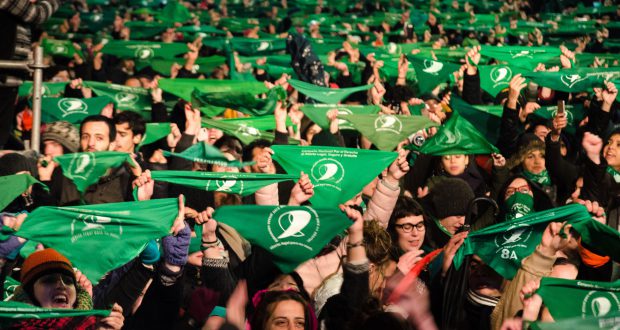 The Socialist spoke to Lucia, a pro-choice activist from Argentina living in Ireland, about the recent movement there for bodily autonomy that has seen hundreds of thousands take to the streets in recent months.

What made you get involved in the movement?

“I am an activist in a political organization so for several years I have been in contact with the struggles of feminism. However, recently I began to be aware in my work (I am a scientist) of the gender discrimination that women suffer constantly and how naturalised they are. In particular, I did not realise the small number of women who become teachers or group leaders; that all the bibliography was written by men, and the thousands of extra obstacles that I had to overcome just for being a woman. Then, from that moment I felt the imperative need to be actively involved in the feminist movement.”

What are the main issues for the movement?

“In Argentina every 18 hours a woman is killed because of being a woman. That is the main reason why the “Ni una Menos” (Not one more) rally has started. We fight to disavow every form of gender-based violence and to protect our right to exist free of such violence. We fight because there are women that have dissapeared (it is thought that they were abducted by human trafficking networks). We fight for abortion legalisation (which is allowed in cases of rape or risk to the mother’s life). We fight for ending the gender wage gap.”

Has the repeal movement and victory in Ireland had an effect on the movement in Argentina?

“Definitely yes. During May, in our parliament, was taking place the abortion legalization debate. (It was approved at the Lower House on June 13th but rejected on the Upper House on August 8th). So, when the referendum took place in Ireland we had our eyes watching you. As in Ireland, the Church in Argentina has a lot of power (Pope Francis is Argentinian). So the fact that the 66% of you voted Yes filled us with enthusiasm and optimism. Although in Argentina we lost the legalisation, on the streets we won an important battle. Not only the abortion legalization was install as a subject but also make people understand that motherhood will be desired or it will not be. As we say in Argentina, ‘patriarchy is not going to fall, we are going to bring it down’.”