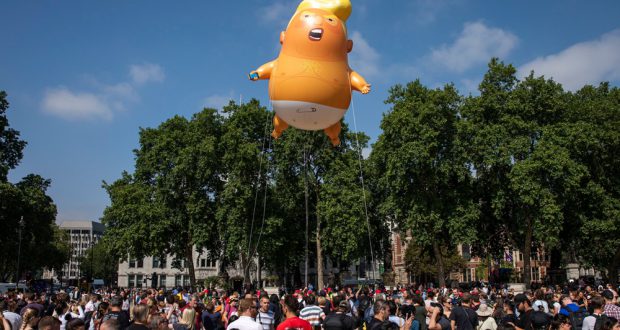 A creature of capitalism: Why you should march against Trump

The pathetic toadies in government will be rolling out the red carpet the billionaire bigot , “Grabber-in-chief”, US President, Donald Trump in November.

There are many reasons why we should hit the streets when Trump arrives. He has shamelessly whipped up racism and Islamophobia, he is a misogynist, a climate-change denier and has virtually threatened nuclear war with some frivolous late-night narcissistic tweeting. Most of all, we should protest and march to stand in solidarity with the workers, women, people of colour, LGBTQ people, migrants and young people who are in the firing line of his extreme right-wing politics and who have been resisting him and that he represents.

In a graphic illustration of how rights can never be safe under capitalism, Trump’s federal Supreme Court judge nominee is on record as opposing Roe vs Wade (the case that legalised abortion in 1973 in the US). The threat to Roe vs. Wade will be a further impetus to the new women’s movement that has broken out, provoking outcry and a powerful feminist and working class fightback against the swingeing attacks on abortion rights across the States.

Following his election and subsequent inauguration, he was greeted with the biggest protest in American history as millions of women, young people and workers took part in marches not only in the US but on all continents to show that this bigoted individual is not welcome.

Donald Trump is not a freak accidental figure; born into a super-wealthy family and embodying greed and elitism his whole life, he is the product and an indictment of the capitalist system based on inequality and exploitation, personifying and illustrating the sexism, racism and homophobia rampant in our society.

It is not enough to condemn Trump. In Ireland, over four thousand asylum seeking people spend an average of over three years in Direct Provision in inadequate, crowded accommodation, unable to even work, impoverished and left in limbo.

The European Union has blood of thousands who perished in the Mediterranean Sea trying to get away from war and suffering on its hands. An international challenge to the system of capitalism is needed for real change; to truly unroot the basis for this system of exploitation and oppression, namely the private ownership of wealth and drive for profit at the heart of the capitalist system.

In the US itself, wealth inequality continues to grow; today, the top 1 percent of households own more wealth than the bottom 90 percent combined.

Globally, the eight richest men own the same amount of wealth as the poorest 50%. Working poor are becoming the norm as the employees of Jeff Bezos, the richest man on the planet, refrain from drinking water as they won’t have enough time for a toilet break afterwards.

Join with the Socialist Party, part of an international socialist movement, seeking to install real democracy in the world based on the needs of the people, not the profits of the corporations. Join us to protest Trump’s visit and get involved in anti-capitalist action.