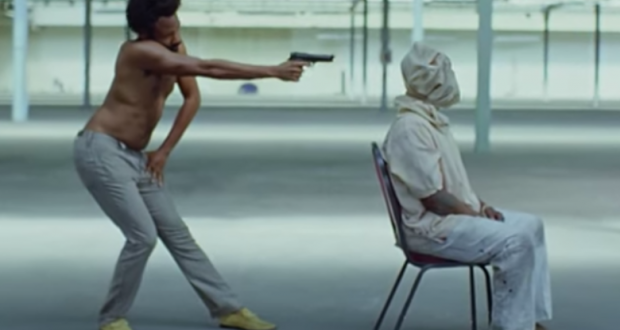 Childish Gambino’s “This is America”

Accompanied by cheery music with warm gospel voices a black man picks up a guitar from a chair, sits down and starts strumming as the camera moves onto a solitary figure in a warehouse. The latter turns to you and begins dancing, moving to the buoyant music. He takes out a gun, strikes a pose, and executes the man sitting in the chair, now with a bag over his head.

“This is America” raps Childish Gambino (AKA Donald Glover), as he dances away from the collapsed man with bound hands. The sharp contrast between the happy tones of the afro-folk inspired choir and the harsh trap sound shocks the audience into attention. “Don’t catch you slippin’ now,” he continues, almost to say, “don’t forget your place. Comply or be exiled.” The gun is gingerly collected by a boy and wrapped in red cloth, like something treasured, as if it hasn’t just taken a life.

Soon he’s joined by a jovial group of school kids following his lead in dancing amidst the developing turmoil. Resolutely, Gambino looks into the camera, almost daring you to look away from the hypnotic show he and the kids are putting on, to see beyond the entertainment and witness the reality.

This is a commentary on the attempt to cover up the brutality of the racist system of capitalism in US through entertainment and the image of a wealthy rapper. A satire of what black men are meant to aspire to be, wealthy and self-assured having climbed to the top, compared to the reality on the streets of violence and death.  There’s a jarring juxtaposition when we hear a man rapping and bragging about his possessions, wealth and looks as riots explode in the background. “I’m so fitted/ I’m on Gucci/ I’m so pretty.”

The music video received 12.9 million views in 24 hours and has over 250 million views, clearly tapping into something online.

The second chorus offers a brief respite from the chaos as ten choir singers move along to the once again merry choral music, only to be massacred by the singer with an assault rifle. There is no hiding from the brutal reality. Many have compared this moment to the Charleston Church Shooting, in which nine African Americans were murdered by a white supremacist.

In the context of a wave of opposition to police brutality in recent years showcased by protests in reaction to the brutal murders of people of colour, particularly black men, often teens like Treyvon Martin, Michael Brown, the music video offers insights into the issues of race and discrimination in the US. It goes beyond gun violence and into the very heart of what it means to be black in the belly of the capitalist beast.

The hype of recognition at viral dancing trends featured such as the shoot is guilt-ridden as one questions their relevance to the political commentary on race, wealth and America playing out on the screen, making the viewer complicit in the cover-up.