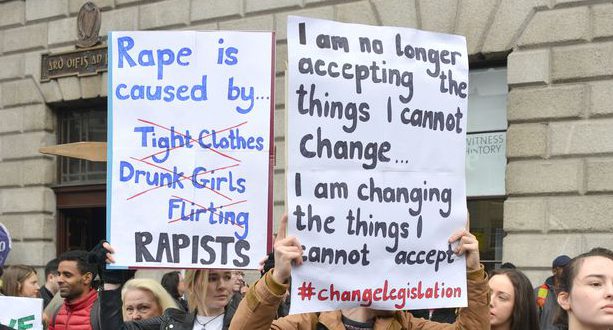 Misogyny, sexism & capitalism in the dock

The outcome of the Belfast rape trial saw an explosion of spontaneous demonstrations in every major city in Ireland bringing to the surface opposition to the culture of sexism and victim blaming in the legal system and society generally. It comes against the backdrop of the historic referendum to repeal the 8th amendment in the south and the emergence of a new feminist movement globally.

“This working class woman would’ve kicked their ass”,  “Even I know no means no”(a placard on a dog),            “Id rather be sued than raped.”Just some of the home made placards that have appeared on demonstrations in cities Ireland, North and South in the wake of the high-profile Ulster Rugby rape trial.

On 29 March, 4,000 protested in Dublin, the day after the verdict, and an incredible 8,000 marched on the following Saturday in a protest and rally facilitated by Socialist Party member, Ruth Coppinger TD. In Belfast up to 1,000 demonstrated outside the courts where trial took place on the Thursday in a protest organised by the feminist movement and 500 attended a further demonstration on Saturday organised by ROSA. Protests also took place in Derry,  Kilkenny, Galway, Cork and elsewhere.

These protests were young, mostly female and extremely angry. Reflecting the youthful nature of this new movement, hashtag after hashtag relating to trial have been trending on social media including; #IBelieveHer, #StandWitHer, and when Paddy Jackson’s (one of the defendants) solicitor threatened to sue people for comments made in support of the victim, the response on social media was for #SueMePaddy to trend.

The trial has brought to the fore the prevalence of sexist and misogynistic attitudes that exist in the legal system and society in general. In Northern Ireland, over 94% of all rape trials have resulted in no conviction for the accused. The conviction rates for sexual violence are far lower than for any other crime.  In the South only 19% result in convictions and 7% when the case is contested. As Suzanne Breen, one of the few journalists who have covered this trial in a fair manner, put it: “This was a case where it wasn’t always clear who exactly was on trial. Each defendant is rightly allowed their own legal representation. But a 21-year-old woman being cross-examined by four defence barristers over eight days pulls at your heart-strings…The young woman failed to secure the verdict she desired. She did not win, yet she has certainly not lost.”

It was a trial that exposed how what women wear, where women go, who women look at, can be taken as evidence for consent, in the face of the expressed statement that consent was not granted. Comments made by the defence barrister throughout the course of the trial have revealed the attitude of the criminal justice system to victims of sexual violence. From the naked victim-blaming of statements like, “If you didn’t like him, why were you kissing him in his bedroom?”, to the young woman’s clothes being passed around the jury and inspected for tan stains (apparently evidence of consent), the trial took the form of a prolonged and misogynistic character assassination of the complainant.

The coverage in the aftermath of the trial, of the defendants’ disgusting comments in a WhatsApp group has also infuriated people. In the group they describe themselves as “legends” and “top shaggers” while the victim, who had left the house bleeding and traumatised, is described as a “Belfast slut.” For many women this can unfortunately be their daily experience in interacting with some men.

The comments on the rugby players’ “upbringing” from the defence and what good families they come from, and the implication that the party’s attendees would have prevented the rape had the victim screamed because they were “middle class” also highlights the anti-working class prejudice inherent in the legal system.

The media often legitimised the defence’s conduct by giving voice to the most conservative ideas in society and backward attitudes about sexual consent. Reportage has been biased and salacious: some papers published descriptions of the woman’s clothes and underwear.

Socialists favour special measures to ensure that victims of sexual violence receive justice. The example of specialised courts should be considered, as in South Africa and other countries, which provide judge and juries with training and have produced a higher level of convictions and less traumatic experiences in court for victims of sexual violence. Similarly, we believe that the reporting guidelines from the National Union Journalist should be fully enforced.

When asked in court whether or not the complainant had said “yes”, Paddy Jackson replied, “she didn’t say no”. The fact that this was interpreted as an affirmation of consent, rather than an admission that consent was not obtained, is extremely telling. At least three of the four accused in the recent rugby trial went to a school that uses the Christian fundamentalist and anti-choice organisation, Love for Life, as their provider of sex education, as do 70% of schools in Northern Ireland.

Alongside the important movement for repeal and abortion rights, a new youth movement can emerge to demand action to overhaul sex education in our schools, North and South. The southern government has already announced a review of the sex education curriculum. This is a reflection of the pressure being exerted by the #Ibelieveher protests and the ‘Objective Sex Education Bill’ that Ruth Coppinger and Solidarity have introduced in the Dáil and that is due to be discussed on 18 April.

These protests are the local reflection of the incredible #MeToo movement which has swept the world. A movement against gender-based violence has been bubbling in society over the last few years. This was seen in the Rage against rape movement in India in late 2011 in response to the suicide of a 17 year-old rape victim, as well the “slut walks” which saw protests across the world in the aftermath of a Canadian police officer telling students that “women should avoid dressing like sluts,” to prevent sexual violence.

The #Metoo movement brought this to a different level at the end of 2017. What began in Hollywood – with actors speaking out against the sexual assault and harassment they suffered at the hands of Harvey Weinstein and others – has spread around the world. Virtually every capitalist institution, from the media, to the major corporations, to parliaments, to charities, has been damaged by an avalanche of accusations. This outpouring, largely via social media, is an indication both of the continued all-pervasiveness of sexual harassment and assault and an increased confidence to fight it.

In 2018 alone we have seen millions who marched against Trump and the threat he poses to women, the LGBTQ community and people of colour. We have also seen the #NiUnaMenos movement against femicide in Latin America which has spread from Argentina (where a woman is murdered every 29 hour) across Latin America as a “collective cry against machista violence”.

On International Women’s Day this year, six million women, young people and workers took part in a “feminist strike” in the Spanish state against macho culture and the gender pay gap. Importantly this movement took up the traditional method of struggle of working-class people – strikes. And they learnt from the strikes against attacks on abortion rights the previous year in Poland, in a movement which has also seen 45,000 people take to the streets this year against attacks on abortion rights.

This movement is happening at an important juncture in Irish society – on the eve of an historic referendum campaign to repeal the 8th amendment from the Irish constitution. North and South we live in a society where there is an incredibly low rate of conviction for rape and sexual violence yet the threat of prison hangs over women who have an abortion. It has been a movement of young people and women that has forced a referendum on this odious, anti-women amendment, including the pioneering work of ROSA in exposing that abortion in Ireland is a daily reality, through direct actions with the abortion pills.

It will also be a grassroots movement from below that will ensure that we get pro-choice legislation as well as win abortion rights in the north. A Yes vote will be an important step to winning women and pregnant people bodily autonomy, but also striking a blow against sexism and the conservative institutions who peddle it. As even a recent UN official, commenting on the denial of abortion rights, stated, “the situation in Northern Ireland constitutes violence against women that may amount to torture or cruel, inhuman or degrading treatment.”

In the last few years the history of abuse at the heart of the key establishment instructions has come to light. In the South, the abuse in the Magdalene laundries and the industrial schools has been well documented. In the North, that history of abuse in Catholic institutions has also been well document, as has the involvement of the Unionist establishment in systematic abuse, of the children in Kincora, for example. The case of Maria Cahill also shows the role played by paramilitary organisations (in this case the republican movement) in covering up sexual abuse.

Capitalism inherited the oppression of women and honed it to a new level. It will never willingly grant full rights to half the population, for fear that the inequality on which the system is based will be challenged. It gains from the oppression of women, for example the unpaid work of women is estimated to stand at $10 trillion globally per annum. Furthermore mega-profits rest upon capitalist culture’s pushing of the sexist objectification of women’s bodies. This, and the promotion of outdated binary gender roles, which is pushed by the beauty, fashion and sex industry, makes billions in profits annually.

This means the feminism of Hillary Clinton and establishment figures like Katherine Zappone is meaningless – because it doesn’t challenge the system. There needs to be a socialist feminist challenge to capitalism in Ireland. This new movement against gender-based violence and a victory on abortion rights can give a huge impetus to fight for such fundamental change.

It is no coincidence that women members of the Socialist Party and ROSA activists have been prominent in this movement and have been prominent in campaigning for repeal and pro-choice legislation. It flows from a political analysis that understands the rotten nature of this system that breeds inequality and oppression, but also an analysis which has confidence in the ability of women, LGBTQ, young people and workers to challenge that system and build a socialist society free of inequality and oppression. If you agree, join us.