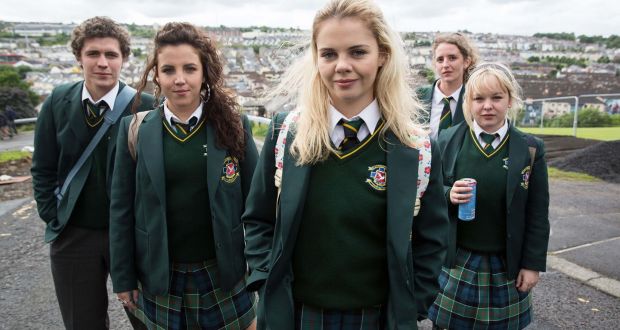 Derry Girls: Laughter and tears of working-class life during Troubles

It’s fair to say that the Channel 4 hit Derry Girls, which was commissioned for a second series after its first episode, had us all in laughter and tears by the end of it. The series is set in Derry, a “troubled little corner of the world” as Erin puts it, with the backdrop of the Troubles. It follows a group of teenage girls and a “wee English fella” as they grapple with teenage angst and all the fun that comes along with it in the context of sectarian conflict, and is steeped in nineties nostalgia.

Whilst there are of course lots of exaggerations, everyone could relate to at least one of the characters. The no-nonsense Ma who just point-blank refuses to do a half load of washing because it’s against her beliefs, Clare who is revealed as the “wee lesbian” or Granda Joe who, after having his driving license revoked, proclaimed his only crime was being born a Catholic. There’s Aunt Sarah who complains about missing sunbed appointments thanks to bomb scares and “the wee English fella” who goes to their all-girls school as his family are afraid his accent will make him a target in the Christian Brothers.

The series came to a poignant end with the gang getting up on stage in school to support their friend Orla whilst she makes an absolute eejit of herself performing step aerobics to Madonna whilst the rest of the family are at home looking at the TV in horror at yet another atrocity. Writer Lisa Magee said, “I have to at some point show that there were times when it floored you”.

Whilst everyday life did go on for the vast majority of people and things like bomb scares became normalised, there were events that acted like turning points when people just said this absolutely has to come to an end – events like the murder of five Catholics in a bookies on the Ormeau Road, when working-class people responded with protests of several thousand strong on the Ormeau Bridge and a lunchtime rally of 20,000 in the city centre. Or when trade unionists led strikes and demonstrations in the wake of the IRA’s sectarian massacre at Kingsmill. When sectarian forces try to drag us back to the horrors of the past, working-class people, Protestant and Catholic, must stand united in their workplaces and communities and declare with one voice – No going back!