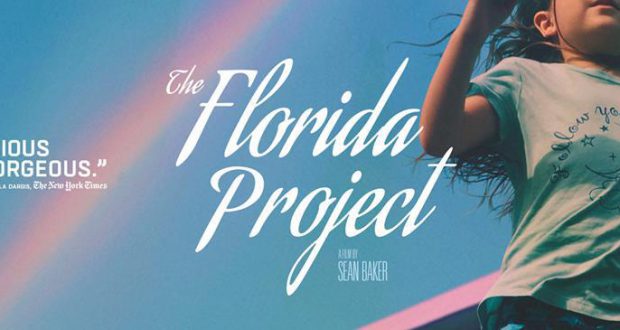 “Disneyland is dedicated to the ideals, the dreams, and the hard facts that have created America.” – Walt Disney

Few things excite children more than the prospect of a trip to Disney World – that fantastical utopia populated by the characters of their most treasured films. It might seem peculiar that  writer/director Sean Baker’s meditation on childhood in contemporary America takes place in the shadows of the so-called ‘happiest place on earth.’ Yet upon watching, one finds it hard to imagine a more fitting location.

The Florida Project follows the lives of Halley (Bria Vinaite) and her daughter Moonee (Brooklyn Kimberly Prince), homeless and precariously residing in one of the many run-down motels in Orlando’s less glamorous outskirts. This not-so temporary home to some of the most marginalised sections of the working class is a far cry from Mickey and Minnie. Nevertheless, the mischievous Moonee and her like-minded friends Jancy and Scooty see no shortage of opportunity for adventure…or trouble.

Whether asking people for urgently required money to satiate their sweet tooths, (“The doctor says we have asthma and we gotta eat ice-cream right away!”), switching off the motel’s electricity or screaming at topless sunbathers, their hilarious antics provide the audience much needed comic relief. The inquisitive cinematography of Alexis Zabe allows us to experience this world through the eyes of a child tagging along with Monnee and her pals. Monotonous highways and tacky gift stores are transformed into exotic landscapes. They throb with colour and beg to be explored.

Unsurprisingly their acts of devilment regularly bring them into conflict with the motel’s manager and handyman, Bobby (Willem Dafoe).  Although in these instances he makes no effort to hide his frustration, beneath it all Bobby is deeply fond of Halley, Monnee and her gang. Dafoe’s expressions artfully depict a man powerless in the knowledge he can’t fix the residents’ broken lives, however much he wants to. Out of a seeming sense of duty he casts a watchful eye over the kids, doing all he can to keep them safe and sound in what he knows is a perilous world.

Yet this is no easy feat. Halley loses her job as a stripper. Making rent is never a certainty, barely attained through a range of illegal odd-jobs (involving her daughter), that gradually get more desperate. Those looking for a morally black or white personality will not find it in any of Baker’s characters. While we are gifted with some of the most gorgeous scenes in cinema’s history of a mother’s love for her daughter, we are also continually frustrated by her chaotic lifestyle that can only negatively impact Monnee. There is absolutely no doubt of her devotion to her child, but it’s also clear that she herself has never grown up.

The Florida Project delicately explores their lives by affording them dignity and revealing the systemic roots of their suffering. The elusive ‘American Dream’ and its ideal of childhood, epitomized by Disney World, is negated by Halley and Monnee who live on its margins, and yet couldn’t be further away.