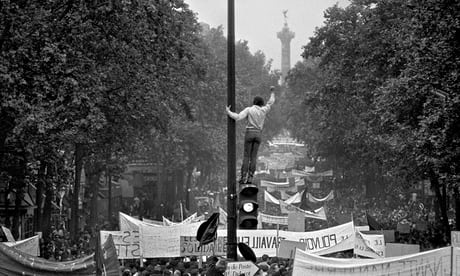 It is fitting that 2018 opened up with the outbreak of revolts and upheavals in both Iran and Tunisia, with young people to the fore in both.  This year marks half a century since the revolutionary year that was 1968.

This was a year that saw young people and workers challenge oppressive capitalist and Stalinist regimes across the planet. In countries as diverse as Pakistan, France and Czechoslovakia revolution burst out against the dictatorial elites that ruled these societies.

An entire generation was beginning to question and reject the old order, and in turn begin to draw revolutionary socialist conclusions about the world we live in. A sharp angle that radicalised many, particularly young people, was the ongoing horrors of US imperialism’s war in Vietnam and the heroic resistance by Vietnamese peasants and workers to its colonial presence. Throughout 1968 mass protests against the war engulfed cities throughout the world.

Added to this was the inspiring struggle for black liberation in the United States itself. The deepening radicalisation of this movement was starkly visible at that year’s Olympics Games in Mexico City, when athletes Tommy Smith and John Carlos gave the “Black Power” salute at the medal awards ceremony while the “Star Spangled Banner” was playing.

In May 1968, a revolutionary general strike of ten million workers shook French capitalism to its core, as the oppressive regime of Charles De Gaulle teetered on the brink of collapse. A real possibility for the working class to take power and carry through a socialist revolution existed only to be betrayed by the (mis)leadership of the Communist Party.

These events had an enormous impact on events here in Ireland, with young people in particular drawing inspiration from these explosive events. Already the working class from the mid 1960s onwards had found a new sense of confidence in its own power that resulted in a growing wave of militant industrial action.

Many young people became active in the battle for decent housing in Dublin. There was a growing challenge to the rule of the Catholic Church, and flowing from that opposition to censorship and the ban on contraception. The Labour Party, which then had an organic connection to the workers’ movement, shifted to the left.

In the North working-class struggle has similarly developed – uniting Protestant and Catholic workers in common struggle. The civil rights movement emerged, spearheaded by young people and influenced by socialist ideas, in opposition to the Unionist regime of the Northern state. The young

people that involved themselves with this movement were also rejecting what were seen as the outdated ideas of right wing nationalism. It not only demanded an end to the systematic discrimination faced by Catholics but crucially, had class demands for housing and jobs for all to the fore, which was able to gain a sympathetic ear and support of young Protestants.

Capitalism today is once again preparing the basis for dramatic upheavals and revolts to take place. While the events of 1968 took place against the backdrop of a general boom in world capitalism, in the last ten years we have seen capitalist crisis and an intensification of the growing transfer of wealth from working class people to the super-rich.  There are now unprecedented levels of wealth inequality in existence.

Like in 1968 there is a growing aspiration for change in terms of living standards and fulfilment of peoples’ rights which capitalism cannot deliver. To deliver this change we need something that was absent 50 years ago, a movement of working-class and young people that is willing to decisively challenge capitalism and organise for socialist change.