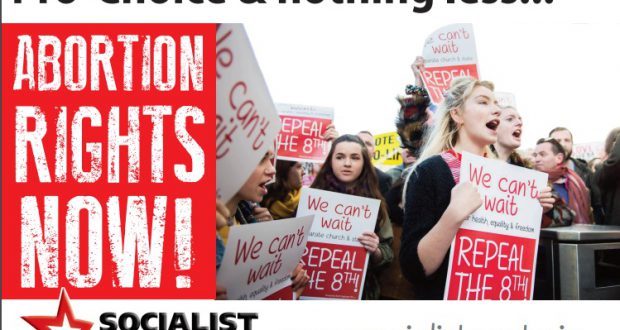 The latest Amnesty opinion poll shows what ROSA and the Socialist Party have been saying all along – that the public are way ahead of politicians and the establishment media on abortion rights.

Ever since the Citizens’ Assembly voted in April, we’ve been told the “middle ground” will never support such an “extreme” outcome and so the recommendations must be “watered down” to ensure a referendum will pass.

The supposedly pro-choice Independent Minister, Katherine Zappone, also chimed in, saying she expected that “the people will not be in favour of a liberalisation of the abortion legislation to the extent that the Citizens’ Assembly put forward”. Simon Coveney opined that “Sometimes these debates are dominated by hardline views on both sides”.

You might assume all this would be based on some genuine polling of public opinion but you’d be wrong. The Amnesty poll is the first time people have been asked what they think of the actual Citizens’ Assembly recommendations, including the recommended gestational limits.

So what did the people say?

• 60% supported abortion on request, including 69% of people of childbearing age (under-45s).
• 89% supported abortion access where there is a risk to the health of the woman
• 81% in cases of fatal foetal abnormalities
• 64% in cases of significant but non-fatal foetal abnormalities
• 85% where the pregnancy is a result of rape
• 57% for socioeconomic reasons

Most of these figures are very close to the Citizens’ Assembly votes. 60% of the public supported abortion on request with a term limit of 12 weeks or more, compared to 64% of the Citizens’ Assembly. Abortion on request up to 12 weeks would cover 92% of those forced to travel to England and everyone taking abortion pills illegally here and so should be a key focus for the abortion rights movement.
In some cases, the public’s views are actually more liberal. 58% thought there should be no gestational limits where a woman’s health is at risk whereas the Citizens’ Assembly opted for a 22 week limit. There was also far more support for abortion on request with no gestational limit: 21% compared to 8%. 29% of under-35s supported this, indicating the strength of pro-choice sentiment among young people.

Contrast all this to last month’s Fianna Fáil Ard Fheis, which voted 6 to 1 for the extreme anti-choice position of “oppos[ing] any attempt to diminish the constitutional rights of the unborn” – in other words not to have any referendum at all. According to the most recent Irish Times poll, only 10% of the population (and 14% of Fianna Fáil voters) support this.

‘Why would we remove something that’s doing its job?’ asked one Fianna Fáil delegate at the Ard Fheis; “the 8th amendment has had a hugely, positive, humane and life saving impact on society” enthused another. The disgraceful heckling of a rare pro-choice delegate who referred to Savita suggests such claims don’t even reflect genuine ignorance of the role of the 8th in causing her death. Mary Butler TD for Waterford got the biggest round of applause of the day for appointing herself the voice of embryos and zygotes, proclaiming “I might be the party spokesperson for older people, but I’m also the spokesperson for the unborn”.

Although such backward views have very little support in wider society, they are exerting a strong constraining influence over the two main establishment parties, which have always been years behind public opinion on everything from contraception to same sex marriage and women’s rights. Of the eleven Fianna Fáil or Fine Gael members of the Oireachtas Committee on the 8th, only Kate O’Connell has publicly supported abortion on request. That works out at a pathetic 9%!

The week after the Fianna Fáil Ard Fheis, Fianna Fáil and Fine Gael clubbed together on the Committee to block it taking a vote to endorse a repeal referendum. Had even a couple of the Fianna Fáil and Fine Gaelers who say they are for repeal (such as vocally or privately pro-choice politicians like Kate O’Connell and Lisa Chambers) actually voted for the repeal motion proposed by Solidarity-People Before Profit, Senator Lynn Ruane, Independents4Change, the Social Democrats/Greens, Sinn Fein and Labour, it would easily have passed.

Instead all they would support was a motion stating that the 8th “should not be retained in full”. Given the government has already announced it’s holding a referendum on the 8th next year, it’s only in the prehistoric context of the Fianna Fáil Ard Fheis that this looks like progress.

What this demonstrates for pro-choice campaigners is that the backward views of the hardcore Catholic right that make up the so-called ‘pro-life’ movement will continue to be used by Fine Gael and Fianna Fáil to portray severely limited abortion legislation as a reasonable “middle ground”.

As political correspondent, Pat Leahy, wrote in the Irish Times a few weeks ago,

“both parties have a reasonably settled view of what will get through the Dáil and stand a fair chance of getting the approval of the people. It is a proposal for allowing abortion in cases of fatal foetal abnormality, rape and a serious threat to the health of the woman – and not in other circumstances… there is little appetite amongst the big parties for going beyond a limited liberalisation.”
This so-called “reasonable middle ground” would mean well over 90% of Irish abortions will still be illegal, with anyone accessing an abortion outside of that facing a 14 year prison sentence.

Fianna Fáil’s Billy Kelleher has been the most obvious mouthpiece for this position on the 8th Committee. In the opening session he made the ludicrous claim that the Citizens’ Assembly recommendations were “a map of many roads’ that “does not give us any clearly defined pathway” and stated that “Fatal foetal abnormality, incest and rape are very often seen as areas where there may be a certain amount of common ground. There may be people on the pro-choice side and the pro-life side who have a very strong view, but there also seems to be a group in the middle”.

The Amnesty poll blows these convenient assumptions out of the water. It proves that the 60% who support abortion on request to twelve weeks or more are the real ‘middle ground’ in Irish abortion politics.

We are certainly not comparable in any way to the 10% reactionary rump of hardcore anti-choicers that oppose abortion in all circumstances. But unless we start building an active, radical and campaigning pro-choice movement now, Fianna Fáil and Fine Gael will continue portraying the more conservative 30% minority as the “middle ground” while also pandering to the reactionary rump and cynically invoking it as a block on progress.

Pat Leahy wrote last month that “like a lot of things in Irish politics, the eventual shape of the abortion referendum will depend on what Fine Gael and Fianna Fáil agree between them”. We have a unique opportunity to change that historical pattern forever. Let’s not squander it.