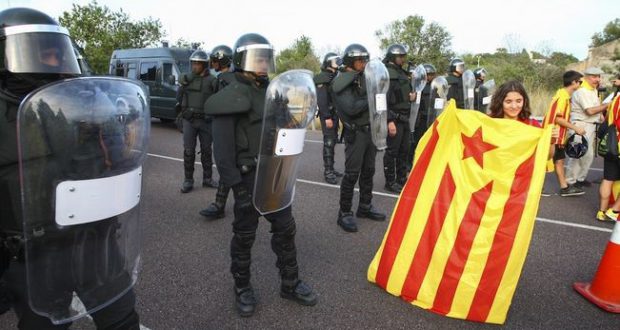 The Spanish State: Its Francoist and repressive roots

It’s just two generations ago that people in the Spanish State suffered under the brutal military police dictatorship of Franco. Undoubtedly, the repression imposed in Catalonia brings back memories of that hated time.

Discontent grow in the years before Franco’s death in 1975. Fearing revolution from below, the regime was forced to implement some reforms, but in a way that ensured real power remained with big business and the state.

A political process was agreed that resulted in the passing of a new constitution by referendum in late 1978. While the constitution allowed for autonomy for certain areas and regions, fundamentally the constitution was rooted in the Francoist view that the Spanish State was indivisible, that it must always remain united as one state and country. Catalonia and the Basque Country could possibly have self-government or a sort but not self-determination.

At the time, even the Financial Times saw the limitations in the change that was taking place, “inevitably the rules have been affected by the entrenched members of the Franco regime seeking to ensure a superficial, controlled democracy weighted against the vociferous demands of the left.”

Political parties, including PSOE and the Communist Party were legalised in 1977 in advance of a general election and the capitalists also established new parties. Instead of fighting for socialist change, both of these parties and the trade unions did a rotten deal with the establishment called the Moncloa Pact. They promised to preserve the economic and social status quo once political democracy was maintained.

This same constitution is now being used is outlaw the developments in Catalonia, including the threat to suspend Catalonian autonomy which it is meant to uphold. This will send shivers through the 17 different autonomous areas in the Spanish state. The capitalist establishment will do all they can to hold onto Catalonia for economic and political reasons. If they accept independence there, they fear an unravelling of the whole state.

Their organisation of mobilisations against independence around Spain and in particular their mobilisation of huge numbers from around the Spanish State into Barcelona, is an offensive act. That, as well as the mobilisation of the army and the Guarda Civil, illustrates their intention of not only intimidating the government, but also their preparedness to try to repress Catalonia if or when independence is declared.

After victory in the Spanish Civil War, first fascism reigned; replaced as time passed by an equally brutal military police dictatorship, where all power rested with Franco for more than 35 years.He was able to determine everything, including who the monarch would be! Parties and workers organisations were smashed and to go on strike was to commit treason. The culture and language of the Basque and Catalan areas was brutally supressed.

The Francoist state was never smashed and there is a Francoist and Falange tradition in the army and state. While the establishment were politically skilful in the way they organised the transition from Franco to “democracy” from 1975 to 1978, the army and the state remain very important forces in Spanish society. The generals and the police will be very concerned about any possibility of the undermining of the state and will be prepared to act.

Just as the repression on 1 October was a shock, violence could erupt again suddenly. If the Spanish state attempts a form of occupation or full-scale repression of Catalonia, as Wolfgang Munchau said in the Financial Times said, “This clearly has the potential to provoke a general insurrection and possibly violent conflict.”

The Spanish state may regret whatever repression it metes out. But it is vital that the working class and the young organise self-defence of the population and force their own demands for a break with capitalism and austerity as the cutting edge of the independence struggle. On that basis they must appeal to the working class throughout the Spanish State to, not only defend their rights for national and social liberation, but to join the struggle and overthrow Rajoy and capitalism.