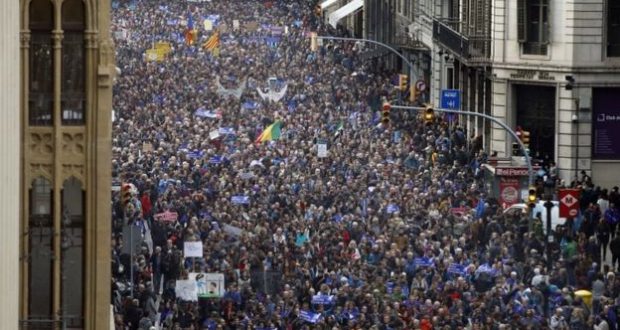 Over 1 million were on the streets of Barcelona yesterday

Mick Barry, Solidarity TD and a member of the Socialist Party, gives an eyewitness report on yesterday’s general strike and enormous demonstration in Barcelona against police repression and for the right to self-determination. Mick was as an international observer for the referendum held last Sunday in Catalonia.

Last Sunday the Spanish State shocked the world as it unleashed violent police repression on the people of Barcelona and Catalonia. The world watched, wide eyed, police fire rubber and plastic bullets, draw batons on old people and women and go on the rampage injuring more than 800 people.

But last night the Barcelona working class responded. For hours beforehand, a human tidal wave had poured into the city, and it was clear from early on that the protest was going to be massive.

The port was shut. The metro ground to a halt. Schools, universities, buses, public services ran on minimum service levels, if they ran at all. Many small businesses shut for the day. Some private sector industry came out too. This was a massive demonstration of working class power. The Catalan working class knows how to fight repression. They have a long and rich revolutionary history and tradition stretching back to the fight against fascism and the Spanish Civil War and beyond. Those traditions were on show on Tuesday night.

Early in the day, as I walked around the city, I came across a group of 200 young people blocking a road with a banner reading, “Vaga General” (‘General Strike’). I fell in with them as they toured the city, standing outside small businesses that had opened, chanting for the general strike until the shutters came down. Then they went onto the main roads and erected wire fence blockades/barricades.

They were just one of dozens of such groups that crisscrossed the city ensuring that Barcelona was progressively shut down.

Around noon the groups converged with hundreds of thousands of others in the city centre.

Some marched around the main streets in groups, most just took over the streets like a huge crowd on the day of a massive football match. It was like the Gaelic football ‘All-Ireland Final’ or the British ‘FA Cup’ final day but with a revolutionary atmosphere!

In the evening, everyone converged, and were joined by hundreds of thousands of others to form a massive general strike demonstration of more than one million.
This demonstration and strike sends out a powerful message to the government in Madrid: you will not intimidate us, you will not beat us off the streets, the streets are ours and we will make our own future!

But it also sends out a powerful message to the local government in Catalonia: we want a different Catalonia, a Catalonia without evictions, cuts or unemployment.
Although the protestors and the local government may seem to be on the same side of the independence battle, Tuesday night shows that at a deeper level they are fighting for very different things.

Forward to a Socialist Catalonia!