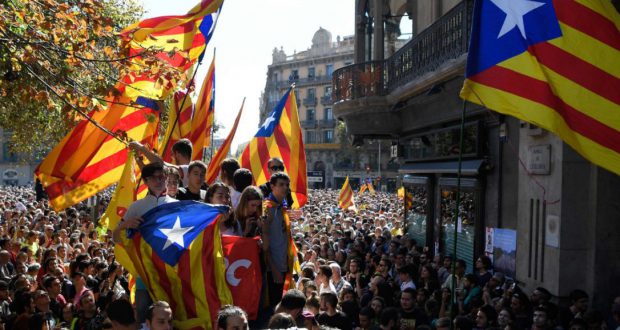 Socialist Party member and Solidarity TD Mick Barry visited Catalonia in the days before and after the 1 October referendum as part of team of international observers. In that time he met young people and workers fighting the repression of the Spanish State.

I spent six days in Catalonia at the end of September and the beginning of October. I witnessed a student general strike, the independence referendum which saw savage Spanish state police violence aimed at voters, and then a general strike in opposition to repression which brought more than a million people onto the streets of Barcelona.

When I arrived at Barcelona airport on Thursday 29September I travelled straight to PlacaUniversitat in the city centre where students had been asked to assemble against police repression aimed at suppressing the referendum.

The protest was first called by the Sindicatd’Estudiantes (Students Union) which is led by the Catalan sister party of the Socialist Party, EsquerraRevolucionaria.

It was obvious as soon as I arrived that this was going to be huge: an hour before the start time there were already thousands in the square. Teenage students, some as young as 13 or 14, then arrived in large numbers. There was a huge cheer when the Barcelona firefighters arrived to provide stewarding for the demonstration to protect it from police attack.

As it happened, with 150,000 young people on the protest the Spanish state police made what must have been a tactical decision not to attack and harden attitudes in the run up to Sunday’s referendum. After discussions with Catalan socialist comrades on the Friday I addressed a national co-ordinating committee meeting of the Sindicatd’Estudiantes on the Saturday.

I voiced strong support for their call for a Catalan Socialist Republic. I explained that Irish independence without socialist change meant a change in the national flag and a different colour on the post boxes without any improvement in the social conditions of the people. Capitalist independence held no attraction for Protestant workers, which enabled British imperialism to carry through the sectarian partition of the Island.

Independence without socialism in Ireland had delivered massive social inequality, an intertwining of Church and State and the surrendering of economic independence to the Troika seven years ago.

I was part of a team of 33 Parliamentary visitors whose job was to travel to polling stations and observe the vote on 1 October, the day of the referendum.

First up was a visit to Sant Gervasi, a middle class suburb in the north of Barcelona. Although I arrived an hour before polling was due to start there were already 600-700 members of the local community surrounding the school/polling station to protect it from police attack.

The school itself was being occupied– one of approximately 70 such schools under community occupation.

It was schools such as this that Spanish state police attacked as polls started to open.
They used plastic bullets and rubber bullets, drew batons against women and old people and went on the rampage injuring 900 people.

All in all, it was the worst police repression seen in a Western European country in decades and it stirred up memories of the era of the Franco dictatorship.

At some Barcelona polling stations the crowds pushed back against the police and drove them back. Once again, the firefighters played an heroic role.

The Sindicatd’Estudiantesissued an immediate call for a general strike on the Tuesday. By nightfall, more than 40 trade union and civil society organisations would echo this call.

I myself witnessed no police violence as I toured the polling stations it Sitges, Subirat and back in Barcelona.

But everywhere there were large crowds gathered to vote and to defend the stations. And everywhere there was great warmth and gratitude for the observers: rounds of applause, hands shaken, “Thank you”, “Democracy”, etc.

The referendum had produced 90% support for independence on a turnout which was probably a little over 50% when ballots stolen by the Spanish State were included. Clearly there was a big minority at least which had not opted for independence. A large percentage of these voters would be opponents of independence who boycotted the poll, many of them of Spanish Castilian origin.

For this reason it was important that the social questions be put to the forefront of the independence battle: against evictions, against cuts, for real jobs, for a different Catalonia and to link these demands to demands for socialist change and for a guarantee of the rights of all minorities.

A socialist Catalonia in turn could fatally undermine the right-wing Partido Popular Government lead by Rajoy in Madrid, opening the way to a Left government with socialist policies and a voluntary socialist federation of all the peoples of the Spanish state.

In this way worker’s unity could be built and action taken to prevent splits developing between Catalan workers and Spanish workers.

Tuesday, October 3 was General Strike day. A group of 200 young people were blockading a main road near my accommodation so I fell in with them. They toured their community stopping outside shops that stayed open, chanting “Vaga General” (general strike) until such time as the shutters came down.

Then they went out onto the main streets and erected blockades and barricades made out of wire fencing and concrete blocks.

Dozens of groups such as this criss-crossed the city all morning, joining the crowds arriving in the city centre at lunchtime. There were close to half a million people gathered there by early afternoon.
The port was shut. The public sector was entirely shut bar skeleton services kept open to ferry people to the demonstrations. Most small business was closed. Some bigger private sector workplaces were shut including Barcelona FC.

The streets were like the streets leading in to Croke Park on All Ireland Final Day – only with a revolutionary atmosphere! Everywhere, people toured around draped in flags, laughing, talking, singing, chanting. The city centre and its streets belonged entirely to the people.

As 6pm drew closer the crowds started moving toward the assembly point. For an hour and a half before the march began it was like a human tidal wave, wave upon wave of people arriving from all angles.

By the time the march moved off there must have been more than a million people present.
The Barcelona working class has strong revolutionary traditions. They have a strong history of standing up to repression going back to the anti-fascist struggle in the Spanish Civil War– and beyond.
The general strike and the demonstration were a powerful response to the actions of the Spanish State on Referendum Day.

This power must now be linked to strong, independent class politics and to the fight for a Catalan Socialist Republic and for socialist change throughout the entirety of the Spanish state. 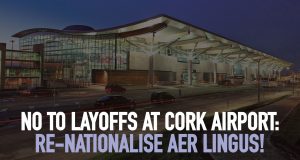