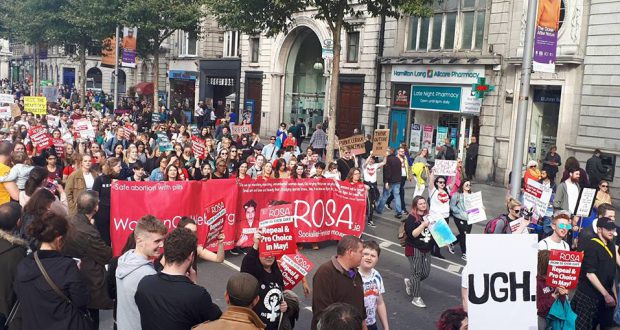 ROSA contingent on the recent March for Choice

A year ago, there was a sudden outbreak of tone policing of the abortion rights movement in the media. In the space of a month, upwards of thirty articles appeared urging women not to be so shrill, to be reasonable, to tone it down for fear for alienating the so-called “middle ground”.

This just so happened to coincide with the voting down of a Solidarity-People Before Profit Private Members’ Bill for a Repeal referendum. Twelve months later on the cusp of that referendum, another round of tone policing and expectation management has begun.

The line this time is that any referendum linked to pro-choice legislation similar to the Citizens’ Assembly recommendations would surely fail. So women must lower their sights and accept only a very limited expansion of abortion rights.

This would mean allowing abortion only in cases of rape and fatal foetal abnormalities and continuing to deny bodily autonomy to well over 95% of women who need abortions. “Good” women forced to have sex against their will or who had wanted to become pregnant would be granted abortions. But “bad” women who (shock, horror!) willingly had sex without wanting to get pregnant would continue to be banished to England or risk 14 years in prison for taking the abortion pill.

Independent Minister, Katherine Zappone, joined in two weeks later, saying she expected that “the people will not be in favour of a liberalisation of the abortion legislation to the extent that the Citizens’ Assembly put forward”. This didn’t stop her from Marching for Choice the very next day – just as last year she marched in her Repeal jumper before voting against Solidarity’s repeal bill.

The Irish Times were next in on the act, commissioning a “push poll” designed to wind the clock back to before the Citizens’ Assembly shattered the establishment consensus for severely limited abortion access. Voters were offered only two options: a referendum restricting abortion access to cases of rape, fatal foetal abnormalities or “real risk to the life of the woman”, or allowing abortion ‘in all circumstances…up to the 22nd week of pregnancy’.

Option two was portrayed as based on the Citizens’ Assembly, whereas what they actually recommended was access “without restriction as to reason” up to 12 weeks, and after that for health, socioeconomic reasons or severe or fatal foetal abnormalities. Leaving all of that out removed many of the situations that might cause the “middle ground” to consider the issue more carefully. For example, a Sunday Times poll in May found 77% support for abortion access on grounds of health.

Yet in spite of this, when undecideds are excluded, 41% still said they would vote yes in a referendum allowing abortion “in all circumstances” up to 22 weeks. The majority of those aged 18-24 said they supported abortion being legislated for in such circumstances.

This shows just how far public opinion is ahead of the political and media establishment. This was clearly illustrated at last weekend’s Fianna Fáil Ard Fheis where a motion calling for repeal of the 8th amendment was voted down.

The task now for the pro-choice movement is to build on and mobilise the pro-choice opinion that exists in society. The main focus right now should be the 21 politicians on the Oireachtas Committee on the 8th amendment who are to report to the Dáil before Christmas on the wording of the referendum and the content of abortion legislation. The next eleven weeks will be crucial inpressuring them to support a straightforward repeal of the 8thand prevent them from watering down the Citizens’ Assembly proposals.