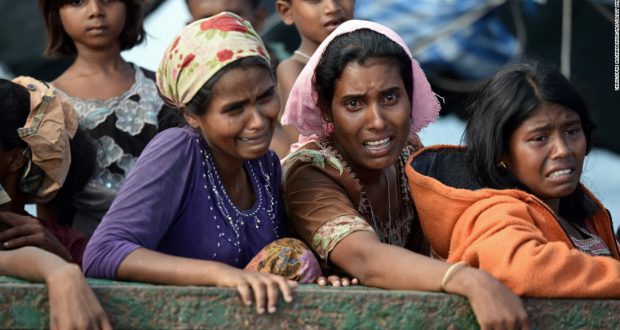 By Clare Doyle, Committee for a Workers International (CWI- the international socialist organisation to which the Socialist Party in Ireland is affiliated)

What was a slow-burning conflict between the government of Myanmar (Burma) and the Rohingya people of Rakhine, has escalated in the last three weeks into a major humanitarian crisis. More than 400,000 people fled the country towards neighbouring Bangladesh. Tens of thousands have been trapped in a rain-soaked no-man’s land without food, shelter or medical aid. Hundreds of thousands are struggling to survive in make-shift camps in Bangladesh. New-born infants perish along with the frail and elderly.

The Bangladeshi Prime minister, Sheikh Hasina, told the terrified refugees they must go back! Now a vast new temporary camp is being built which amounts to nothing but a prison. The refugees are told they must stay in the camps until they return to their country. Local people are forbidden to give them shelter or aid, even if they are relatives. Before the brutal military assaults started on August 25, there were already 400,000 Rohingya in Bangladesh who had fled previous waves of violence. The government of Myanmar banned most international aid agencies from giving assistance within its borders.

For many years, the disenfranchised and oppressed Rohingya people sought safety beyond the borders of Myanmar. Just two years ago, there were as many refugees perishing in the seas around the country as those drowning in the Mediterranean. Today, hundreds of thousands are fleeing the massacres, rape and pillage being carried out by the Burmese military in their ‘home’ state where they constituted a majority.

Aung San Suu Kyi is the acknowledged political leader of Myanmar since her party – the National League for Democracy (NLD) – won 80% of the popular vote in 2015. It was the first ‘free’ general election after fifty years of repressive army rule. But she has earned world-wide condemnation for her failure to speak out against the atrocities inflicted on the Rohingya by ‘her’ government.

When, two weeks into the crisis, she broke her silence in a phone call to President Erdogan of Turkey, all she could say was that there was a “huge iceberg of misinformation” about what was happening. This is almost ‘Trump-speak’ – a total denial of reality. And this was when the media of the world were exposing incontrovertible evidence of cruelty and mass slaughter of innocent civilians. She also announced that she would not be appearing at the United Nations General Assembly this week to discuss the issue.

Her speech to Myanmar’s parliament on 19 September was described by Amnesty International as “a mix of untruths and victim blaming”. She did not address the question of state-sponsored military violence and rather disingenuously claimed that the government had improved conditions for Muslims living in Rakhine.
Various human rights campaigners and academic institutions have called for the withdrawal of Aung San Suu Kyi’s Nobel Peace Prize. Ironically she was given this award for her own opposition to the rule of the military, which saw her spend fifteen years in jail or under house arrest.

The Committee for a Workers’ International (CWI) has always maintained that Aung San Suu Kyi’s passive resistance would not be a strong enough weapon to right the wrongs of decades of military rule and she would not mobilise the masses to remove them. She has long danced to the tune of western capitalism’s interests; its trade and investment in the region. But now her government’s policies may be dictated far more by the growing influence of China’s military-industrial complex.

The military in Myanmar, which still hold the reins of power in society and in industry, justify their actions against the whole Rohingya population (of more than a million within the country) by the need to eliminate terrorism. Yet it is the terror campaign of the army, backing up the relentless and bloody persecution of Rohingya by Buddhist chauvinist fanatics, which has driven a desperate layer of young people in this direction.

On 25 August fighters of the ‘Arakan Rohingya Salvation Army’, attacked 30 police posts and an army base, killing several people. The military also said there were ‘people inciting riots’. An oppressed people has the right to defend themselves, with arms if necessary, but unless there is a mass movement, this kind of tactic alone cannot offer a long-term solution to the suffering of an oppressed people. It can also be used as a pretext for state forces to clamp down on a whole population.

The response of the army to the August attacks was to launch an unprecedented and bloody campaign of reprisal. Hundreds of civilians were killed and at least 500 villages burnt to the ground. Hundreds of thousands of people – including non-Rohingya – were forced to flee their homes with nothing but the clothes they were wearing.

Muslim Rohingya people have lived in this part of what became Burma since the 12th century. Resentment against them developed when their numbers were increased by the British, partly as a counterweight to Buddhist forces during World War Two and also as cheap labour when Burma was regarded as just a province of India within the British Empire.

It was fighters like Aung San Suu Kyi’s father who ended British colonial rule and achieved independence in 1948. Very soon afterwards, he and his co-fighters were assassinated. Later, in 1962, generals of the Burmese army who had taken power went on to nationalise what had belonged to the British but it was a state without democratic rights and control.

Decades later, in August, 1988, a heroic revolt of workers and students came close to overthrowing the generals’ dictatorship. The odds were heavily stacked against them and they did not have the necessary experienced, theoretically-armed party to carry through the revolution. The uprising was crushed and a further period of intense repression ensued, broken only by a brief attempt at a new upsurge in 2007.

In Buddhist-majority Burma, the Muslim Rohingya have long been treated as an oppressed minority. There are 135 ethnic groups with recognised status in the country, but the Rohingya are not even recognised as an ethnic group. They have been denied citizenship since 1982 and it is notable that Aung San Su Kyi, had not one Muslim candidate on the electoral list of her party in 2015.

Nevertheless, as Ye Naing, a Burmese student, told socialistworld.net in June of this year, ethnic minorities had voted for Aung San Suu Kyi at the time of the election, hoping for moves towards local autonomy and a more federal system. The military has plundered the natural resources in the states where the ethnic minorities live without giving anything back to them. Aung San Suu Kyi “is not interested in fighting for the Rohingyas,” he said “and will just let them rot in the concentration camps or perish in the seas.”

Several countries in South East Asia have Muslim majorities, including the relatively wealthy Malaysia. But all of them have maintained, even during the ‘boat people’ disasters of recent years, that the Rohingya must stay out.

Bangladesh is a poverty-stricken country and one of the most densely populated in the world. But its top politicians (who are second generation ‘freedom fighters’ from the 1971 war of independence), are amongst the richest in Asia. They are also amongst the most corrupt.

On the other hand, the workers of Bangladesh have a proud tradition of struggle – of strikes and hartals – against the bosses and against destructive building projects.

An end to these nightmares

Working people around the world feel powerless to end the suffering of the Rohingya in Myanmar. Within the country there are reports of solidarity demonstrations and angry protests by people from other communities against the atrocities carried out by the military. Solidarity protests have also erupted in Bangladesh as well as Indonesia and other countries further afield.

Events like the present catastrophe for the Rohingya in Myanmar can arouse anger amongst workers and young people across the world and lead them to question the whole way the world is run.

The struggle to defend persecuted minorities in any country cannot be separated from the need for a united struggle of all workers against the common enemy – the bosses and the defenders of their system.

Capitalist politicians and some international organisations that purport to campaign for justice hold up their hands in horror and weep crocodile tears about events in Myanmar. But these politicians and their system breeds war and division. They fear the mass revolt of working and poor people, and may their fears be soon realised!

Parties with socialist ideas and programmes will grow in the hothouse of the big social struggles to come. Lessons will be drawn about the need to fight for a new society – a society in which the rights of all minorities, up to and including self-determination, are upheld within a voluntary federation of socialist states. 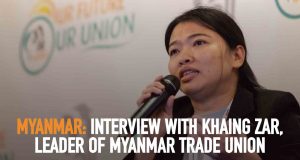 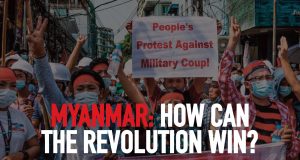 Myanmar: How can the revolution Win? 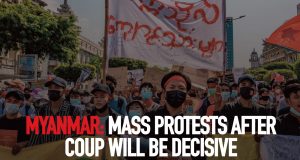