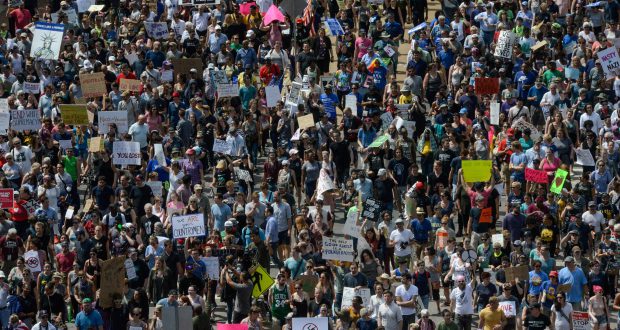 The vicious white nationalist violence in Charlottesville and across the country this weekend has acted as a collective wake-up call. A powerful left challenge must be built against racist violence, vigilante intimidation, and bigoted government policies. Leaders like Bernie Sanders, alongside the unions, civil rights, immigrant, socialist, and other progressive organisations must step up to coordinate mass protests in every city to isolate and drive back far-right forces. These protests should be linked to a clear anti-Trump, anti-corporate programme to unite the vast majority of working people against racism and bigotry.

‘Alt-right’, white nationalist, and neo-Nazi groups have organised increasingly bold, racist demonstrations since Trump’s election. While still small, the size and confidence of neo-Nazi and white nationalist groups are growing. The hundreds of white nationalists who descended on Charlottesville, Virginia, this past weekend for the “Unite the Right” convergence clearly aimed to launch their movement onto a higher plane.

With the brutal murder of Heather Heyer by neo-Nazi motorist James Fields during these events still fresh in the headlines on Saturday, Trump got on national television to condemn the violence and hatred “on many sides.” His failure to specifically condemn the white nationalist and neo-Nazi groups drew immediate outrage from millions, while at least one alt-right website welcomed Trump’s remarks as “really, really good.”

The sweeping public outcry against this display of violence and bigotry in Charlottesville demonstrates the real balance of forces in US society against the far right. Spontaneous mass protests are erupting in cities across the country. Alongside a plan for nationally coordinated mass protests, wherever necessary the left needs to pull together democratic community/labour defence coalitions to physically defend our movement and communities against attack.

What is increasingly clear, however, is that anti-racist protests alone are not enough to cut across the growth of nationalism and racism in society. To push back against the rise of white nationalism, or to build an effective resistance against Trump, requires a conscious political strategy to isolate the far right.

Addressing the roots of Trumpism

While most Republican leaders attempt to distance themselves from alt-right groups, in reality their coded bigotry and racist government policies have encouraged the growth of racist and reactionary ideas. Decades of business-backed bipartisan “tough-on-crime” policies, whipping up Islamophobia under the guise of “anti-terrorism,” and escalating deportations of immigrant workers have created a racist climate that white nationalist forces can take advantage of.

At root, the rise of far-right, reactionary and neo-fascist forces can only be understood as an international phenomenon, a result of the deep crisis of global capitalism. Capitalist governments everywhere have overseen a dramatic rise in inequality, with islands of extreme wealth surrounded by a fast-growing sea of poverty, economic insecurity, and social disintegration. With their system in crisis, and faced with the threat of a working class resistance, a section of the ruling class is resorting to racism, nationalism, and bigotry to divide and conquer.

At the same time, the failure of the left and labour movement to offer a bold, working class political alternative has allowed the rise of right-populist figures like Trump. In the last election, Trump appeared as the only “anti-establishment” alternative to the rule of Wall Street and the corrupted political elite after Bernie Sanders’ left-populist campaign was blocked by the Democratic Party establishment. This allowed Trump to demagogically appeal to millions of white working and middle class voters who face falling living standards and are furious at the corrupt out-of-touch political establishment.

It was this political and social context that allowed Trump to get an echo for his cynical appeals to nationalist pride, his scapegoating of immigrants, his naked misogyny, and his pledge to “drain the swamp” in Washington.

If the root cause of Trumpism is the crisis of capitalism, any effective movement to fight the right must link a strong opposition to racism and bigotry with an equally bold programme to end poverty, unemployment, housing insecurity, and the chronic underfunding of education, infrastructure, and social services – paid for by taxes on the rich. In short, cutting across support for Trump and alt-right groups will require building a mass movement which can provide a clear left-wing political alternative.

The potential for this is already visible in the broad support for Bernie Sanders, especially in “red states” that voted heavily for Trump. The self-identified democratic socialist has emerged as the most popular politician in America and is the most prominent voice opposing Trump. Bernie’s popularity is rooted in his call for “a political revolution against the billionaire class,” his demands for “Medicare for all,” free college education, a massive jobs programme paid for by taxes on the rich, and his attacks on not just Republicans but also on the Democratic Party’s corporate-sponsored establishment.

Unfortunately, Sanders has failed to combine his radical programme with the need for a new, mass working class political party, a vital step to unite the growing Trump resistance into a coherent mass movement.

The Unite the Right marches in Charlottesville have outraged millions of working people who are looking for an effective way to fight back. Understandably, the vicious violence of neo-Nazis has created growing sympathy among a section of activists to physically respond, with the popular chant “any time, any place, punch a Nazi in the face” heard on demonstrations across the country.

While appealing to a genuine sentiment, unfortunately, such an approach risks isolating anti-racist activists, cutting across our ability to build the mass involvement and support we need to win. Our power to defeat Trump and alt-right forces lies in the real potential to mobilise the majority of society against them. If progressive leaders like Sanders – alongside civil rights groups, socialists, and labour organisations – energetically built for coordinated, mass, peaceful demonstrations, hundreds of thousands – possibly millions – could be brought into the streets in a decisive show of force against bigotry and racism.

At the same time, bitter experience has made clear that the police cannot be relied on to defend our movements, much less to defend the black, brown, and immigrant communities targeted for racist intimidation and violence. We must begin to rely on our own collective strength and self-organisation to defend one another. Wherever necessary, the anti-Trump movement should organise democratic community/labour coalitions to steward and defend our demonstrations and come to the aid of threatened communities.

Since Trump’s first hours in office, Socialist Alternative has been at the forefront of building the resistance to his racist, sexist, big business agenda. At every stage, we have aimed to link the movement against Trump and his far-right backers to a strategy and programme that can unite working people into a multiracial mass movement. Our central message is that to effectively fight the right, we cannot limit our message to simply saying “no.”

Instead, we must link today’s defensive struggles to a programme and strategy to challenge corporate control of society and to end the economic and social insecurity that is the soil from which racism, nationalism, and bigotry grow.