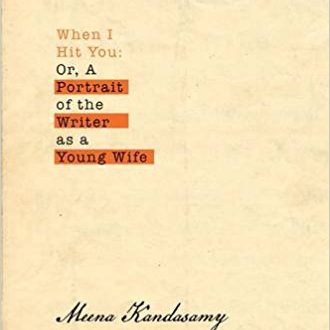 Review: When I Hit You: Or, A Portrait of the Writer As A Young Wife

When I Hit You: Or, A
Portrait of the Writer
As A Young Wife
By Meena Kandasamy
Published by Atlantic Books, 2017

Reviewed by Grace Gageby (first published in Socialist Alternative, magazine of the Socialist Party)
When I Hit You: Or, A Portrait of the Writer as A Young Wife, Meena Kandasamy’s second novel, has been described as both a searing account of an abusive marriage and a celebration of the invincible power of art.

Kandasamy’s novel traces the unnamed narrator’s life through college, to her brief relationship with a politician, and eventually her hasty marriage to a Communist revolutionary and university professor. Once they are married, the narrator’s husband’s behaviour becomes increasingly insidious. He isolates her through controlling her social media presence, attempts to erase her identity as a writer, and uses physical and sexual violence against her.

The depiction of the narrator as a feminist and a leftist is significant. It is in fact a fictionalized account of Kandasamy’s own marriage, and she has stated: “I believed no man could lay a hand on me. I was fierce and feminist and no-nonsense.” The narrator is loathe to bear societal judgement for leaving her husband, and face questions such as “Why did she not run away? How much of this wasn’t really consensual?” Her interactions with her parents provide an insight into marital attitudes in modern India: her mother tells her that “marriage is not magic” and her father warns her “It takes two to fight. He cannot fight by himself.” This clearly illustrates how domestic violence and abuse can be upheld not only by abusers, but by onlookers and society as a whole. It also highlights the epidemic of domestic violence that exists in India, a country in which marital rape is still legal, and intimate partner violence, acid throwing, and honour killings are endemic.

In November of 2016, it was put to then Taoiseach Enda Kenny by Ruth Coppinger, Socialist Party member and Solidarity TD, that a woman attempting to escape an abusive relationship may not be lucky enough to get through to a domestic violence hotline, because of systematic cuts to funding. The fact that 6,000 women were turned away from refuge centres in 2015 was also raised, and Kenny was asked: “Will you stop the cuts to the Rape Crisis Centres, Women’s Aid, to other services and properly invest in them. Will you also agree to the legislative changes we need and to drop the (legal) fees for any woman seeking to get a protection order?”  Both in India and Ireland, there can be no mistake that domestic violence exists as a societal disease alongside gender and class inequality, and Kandasamy draws particular attention to caste issues.

The abuse suffered by the narrator is all the more hideous against the beautiful, lyrical prose, and the array of mediums the novel utilizes, for example, the introductory prose extracts or poetry that begin each chapter. The narrator highlights the manner in which her abuser tries to erase her identity, for example, by making her commit “career suicide” by deactivating her professional Facebook account, and by dismissing her work as “petit bourgeois”. The depersonalisation suffered is illustrated by the third person narration. This reads almost like a film script: “I am the wife playing the role of an actress playing the role of dutiful wife”.  Kandasamy, who has referred to the “crutch of fiction”, nods to her own experience in the finishing chapter, saying “I am the woman who has tried to shield herself from the pain of the first-person singular.”
As a defence against the abuse, which rapidly turns from psychological to physical violence, the narrator uses her sense of self as a writer and an artist to wage her defiance against her husband, much to his chagrin. “Everything is writing material for you isn’t it? The trouble is that you don’t want a decent chance at life. You’re only after a story, and you make my life a living hell.”
When I Hit You is a many-faceted book. It is both abhorrent in its violence, yet unputdownable. It is both a cautionary tale for misogynists, and a celebration of art and its capacity for maintaining the resilience of the human spirit. It is catharsis and poetry, experience and fiction, and in short, an incredible novel.