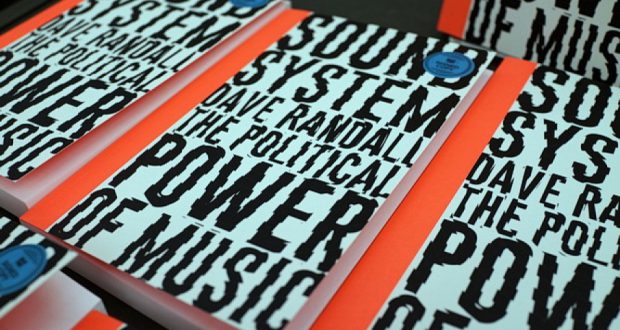 By Dave Randall
Published by Pluto Press, 2017
Reviewed by Dean O’Donnell
As Jeremy Corbyn took to Glastonbury’s Pyramid Stage to address a crowd of tens of thousands predominantly young festivalgoers he looked surprisingly comfortable. “Do you know” he asked rhetorically, “politics is actually about everyday life?”
This was perhaps the crowning gesture of an election campaign that made swathes of working class and young people reconceive politics, wresting it from the House of Commons and turning it into a living, breathing process. It was politics put back in the street, firmly embedded in popular youth culture. The musical event of the year and a formative experience for so many Britons, where better a place to affirm this than Glastonbury?
It’s in this context that Dave Randall’s innovative debut Sound System: The Political Power of Music proves to be ripe with insight. A seasoned guitarist who toured with the likes of Faithless and Sinead O’Connor and a persistent campaigner for the liberation of Palestine, the musician-activist sets out to undermine the notion that “politics takes place in parliament and occasionally on picket lines and demonstrations, while culture is synonymous with recreation and entertainment.” It’s in a style that is both straightforward and engaging that Randall embarks on a road trip through the various places and times that music has played a vital role in the struggles of the oppressed.
He comfortably navigates from the 19th century origins of Notting Hill Carnival in the traditions of the working classes of Trinidad and Tobago, to Fela Kuti’s rousing of the masses through his musical response to colonialism, neo-colonialism and corruption in Nigeria. Over the course of Sound System these, and a diversity of other political battles, are subjected to a material analysis – music is explored as arising from a definite set of social relations, one that it reflects and potentially points beyond.
Nevertheless, music should not be taken as inherently enlightening, and Randall is quick to remind us of this: “secretly, rulers have always understood the power of music. They recognize that culture is a key battleground in the fight for hearts and minds – an important tool to manufacture consent.” The ruling class of Hitler’s Third Reich made efforts to recruit composers like Richard Strauss and to repress schools of composition they saw as rebellious and potentially threatening. Likewise, in ‘democratic’ capitalist societies the bourgeoisie have overwhelming control over what type of music is produced and distributed. In its early days of development Randall describes how “the captains of the new music industry skipped over subversive workers’ songs that had been popular for decades. Instead, sentimental and patriotic tunes filled the airwaves.”
Importantly, this does not divest all popular music of its radical potential. The industry never exerts total control. In an illuminating account of Billie Holiday’s “Strange Fruit”, a song that explicitly deals with racism and lynching in a segregated USA, Randall tells of how it was in fact penned by American communist Abel Meeropol. Initially rejected by Columbia Records for its perceived transgressive character, it went on to sell over one million records, poignantly expressing the suffering of African-Americans and impassioning many to demand it come to an end.
Sound System also explores the status of musicians as workers and their potential to be activists. Invigorating the book are Randall’s anecdotes of the inner-workings of the music industry and lively accounts of his own politicisation. Though touring musicians are commonly perceived to be ‘living the dream’ they are, in fact, subjected to the same realities of capitalism as every other exploited worker. Contracts are often verbal, work is precarious and they at times have trouble receiving proper payment for gigs and tours.
Randall cites the US government statistics that 11.5 percent of adults working in the arts, entertainments and recreation sector report heavy drinking in the last month as being reflective of the stress and sense of insecurity commonly felt by musicians. Being overtly political hardly increases ones prospects, and Randall speaks openly about the backlash he faced from his manager when he recorded a radio advert endorsing the cultural boycott of Israel. Nonetheless, he remains committed to the idea that artists should actively intervene in politics and dedicates an entire chapter to a “Rebel Music Manifesto” outlining various way musicians can effectively engage in political struggle.
Despite the industry being driven by profit, Randall still believes in music’s emancipatory potential. A recurring theme throughout is that “music and music events help to console and abate our feelings of alienation.” The sense of loss and isolation that has undoubtedly intensified under neoliberal capitalism is momentarily relieved at festivals and gigs through shared and profound musical experience. Yet, Randall reminds us that this alone will not change the world, that culture and music must be consciously linked to broader political struggles.
Indeed, he even suggests that Britain’s underground rave movement of the late 80s and early 90s was nothing less than a “cultural uprising” but ran out of steam in the absence of “a significant political organization to align itself with.” Watching Corbyn inspire Glastonbury revelers we see the Labour leader take steps to bridge the gap between radical politics and the popular musical cultures through which so many youth have vent their discontent. Dave Randall’s Sound System brims with creative arguments of why musicians and, indeed socialists, must strive to do the same.