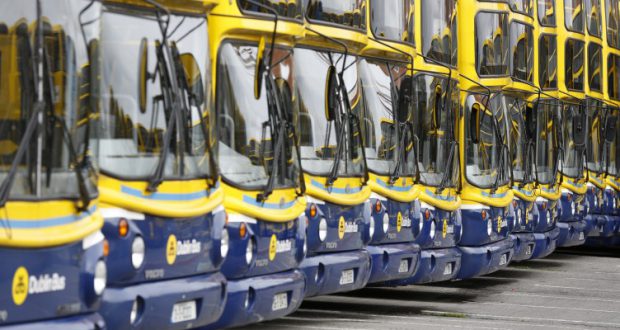 The National Transport Authority are privatising one-tenth of Dublin Bus. From November 2018 they will outsource the routes to UK company Go-Ahead. The NTA says they are “confident that passengers will benefit from this decision,” but socialists and trade unionists are absolutely certain that workers will suffer from this decision.

We are equally certain that this is part of a process of privatisation that would make a mess of Dublin Bus. The only real benefits go to private operators, who get to turn a public service into a license to print money.

“Competition” ploy is a con

Fine Gael claim that the “introduction of competition” is “great news for commuters.” But the false promise of “competition” actually means open season on the rights and pay of the workers. The NTA says it doesn’t “believe” there will be attacks on wages. They think we were born yesterday. Go-Ahead’s counterparts, the private operators who were helped by the government to muscle in on Bus Éireann, have drivers working for them who are on social welfare. It will be for Go-Ahead to decide what to pay and there’s no reason to think it’ll be any different.

Dublin Bus made a cheaper bid for the routes, has exceeded every performance target and put up with massive cuts to the government subvention. But the NTA gave the tender to Go-Ahead instead anyway, claiming that Dublin Bus fell short on “technical” aspects. Any Bus Éireann driver can tell you how private operators rig the game and benefit from preferential treatment, and will smell a rat in this tendering process. So much for competition.

Privatisation must be fought

For socialists, public transport, heavily subsidised by government, is a basic right – not to mention a key means of tackling climate change. Creeping privatisation leads to loss of revenue for the public-owned service, which is in turn used as a justification for more cuts and privatisation. In Britain it has led to a huge rip-off of commuters. In fact, Go-Ahead emerged during and following the massive bus and rail privatisation process of the Thatcher period. It seems to have piggybacked on that disaster. Now it has trouble recruiting drivers to work on low wages, so instead of pay rises, it runs recruitment campaigns in countries where wages are much lower, shamelessly exploiting poor people.

This all has implications for other transport workers too. The strikes of last year and this year in Dublin Bus, Luas and Bus Éireann signal a confrontation over the future of public transport. It’s in the interests of socialists, workers and anyone who is concerned about climate change to stand with these workers in defence of quality public transport and decent pay. Unions must not accept the privatisation agenda.