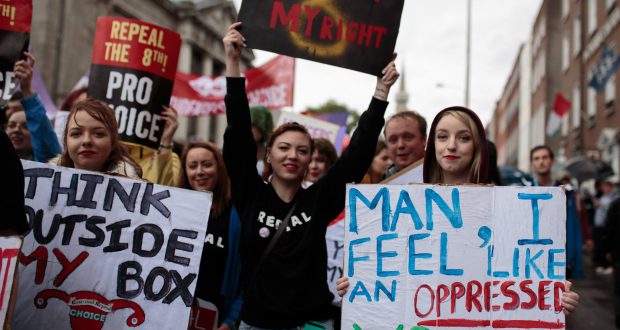 Trust people, not the Dáil, to deliver abortion rights

The Citizens’ Assembly on abortion rights was set up under pressure from the Repeal movement. It surprised the conservative Dáil when it recommended that women and pregnant people be trusted – that abortion should be legalised upon request up to 12 weeks; for socio-economic reasons up to 22 weeks; for health; and for fatal foetal abnormality.

But how will these ever get implemented given that the Dáil parties have an extremely limited position on abortion that is way behind the public? Only Solidarity-People Before Profit and a few independents are pro-choice in line with the Citizens’ Assembly.

As a member of the Oireachtas Committee on the 8th Amendment, I will be saying that neither it nor the Dáil has the right to bury the recommendations or to cherry pick only a few, that to prevent this happening, they must be put to the people. One way of doing this is, on the same day we have a Repeal referendum, to have a plebiscite on the options put forward by the Citizens’ Assembly.

If we just leave it to the politicians, we will never get pro-choice legislation in reality. A plebiscite on the proposals would be an unstoppable force on the Dáil to enact progressive legislation.

In Portugal in 2007, the government held a plebiscite for abortion on request up to 10 weeks. They wouldn’t have enacted abortion legislation had they not had this endorsement. Does anyone seriously believe the Irish establishment — with its relationship  to the church — will bring in the ground-breaking Citizens Assembly proposals without the public forcing them to?

Let’s not repeat past mistakes

Five years ago following the death of Savita, a debate took place in the abortion rights movement  about tactics. At a meeting of several hundred in the Gresham Hotel, the official pro-Choice movement opted to call only for ‘X Case’ legislation. Even notable left activists argued that this minimal abortion, once made legal, would open the way for more abortion rights.

Socialist Party activists argued this was the time for full Repeal of the 8th Amendment, that the movement should highlight how X Case legislation wouldn’t even cater for the circumstances of Savita’s death and that a referendum was now necessary to repeal the 8th. Given the backwardness of the Irish establishment, X Case legislation didn’t lead to any liberalising – in fact the Protection of Life During Pregnancy Act has proven impossible for suicidal women such as Miss Y, to access abortion. We were proven correct and a real opportunity and five years has been lost to advance abortion rights in Ireland.

The same conservatism is becoming evident once again in the pro-choice movement. A golden opportunity has opened up with the far-reaching recommendations of the Citizens Assembly. For the the first time in Ireland, a forum where members of the public were given control has recommended abortion on request in the first trimester when 85% of abortions occur and even for socio-economic reasons ! This speaks volumes about how fundamentally societal attitudes have progressed.

Instead of seizing this golden chance to make the pro-choice argument, a conservative focus is being placed on Repeal alone. A reference is made to ‘no watering down of the Citizens Assembly recommendations’ but no serious case is being put forward as to how these can be actually implemented when  the conservative politicians have power over them. A demand for people to have their say on the Citizens Assembly proposals is vital. The only conceivable way this could be done is by a plebiscite which doesn’t insert anything into the Constitution but is a popular vote on a law.

Spurious arguments are being made about how ‘complicated’ this could be and how Ireland doesn’t have plebiscites. In the Water Charges legislation in 2015, the FG / Labour government put forward a plebiscite on public ownership of Irish Water, so clearly it can be done.

How would a plebiscite work?

Neither should we insult people’s abilities. People are capable of voting on a number of issues when they are explained well in advance. The best way to ensure we get the maximum abortion rights is to put the Citizens’ Assembly proposals as options for people to support, rather than an ‘all or nothing’ vote. The Citizens’ Assembly recommendations can be broken down essentially into four options: FFA, health, socio economic and without any reason up to 12 weeks.

Is it possible to win all four options in a popular vote ? Of course nothing is guaranteed – but it is certainly possible. If 99 random Citizens came to that position after a process of education and debate, why not? But also, the recommendations are in line with previous polls, for example, in an Amnesty poll in February 2016, 67% answered Yes to the statement ‘we should trust women when they say they need an abortion’ and 80 % supported abortion for health reasons.

The prospect of winning such a  historic social change would actually likely mobilise much higher numbers of young people into activity to campaign for all four proposals.

In arguing for minimal Repeal groups, some mistakenly point to the marriage equality referendum as an example where, when people and parties united around a minimal demand, a referendum was won. This is completely the wrong lesson to draw from that campaign. What won the referendum was the mobilising of the youth and women’s vote in particular. But of course the stunning votes  in working class communities proved decisive. These weren’t motivated to turn out by a great faith in the institution of marriage. Rather it was a solidarity with LBGTQ people, a wish to give rights which were being denied and a desire to break with the past and have social progress.