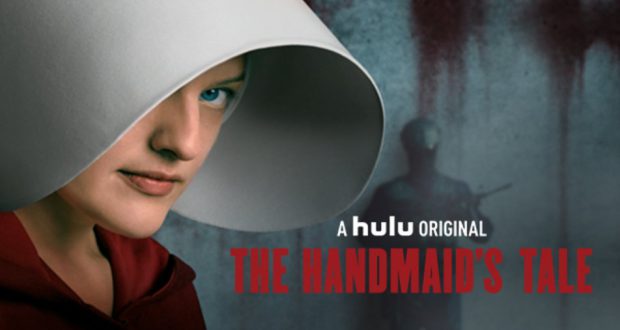 The acclaim awarded to The Handmaid’s Tale is justified. It is a gripping adaptation of Margaret Atwood’s 1985 novel, with strong acting and brilliant cinematography.

The series opens with June, the protagonist, running with her daughter from a paramilitary group of armed men. They wrench her daughter from her arms, knock her unconscious, and load her into a van. As the first episode unfolds, we discover that the same paramilitary group has toppled the US government and installed a theocratic regime in its place. A plague has swept the world rendering most people unable to reproduce; now those women who can still have children are rounded up by the state and given to elite families to act as surrogate mothers. She is part of a group of women known as Handmaids, whose lives and reproductive abilities are tightly controlled, and who are regularly and ceremonially raped by the head of the household and forced to bear children.

In the reactionary Republic of Gilead, women are divided into specialised groups: Aunts, who brainwash and torture Handmaids into compliance; Marthas, who act as cooks and housekeepers for elite families; Wives, who are married to men of the elite. A fifth unrecognised type exists in the underbelly of the puritanical society: women forced into sex work. These groups represent repressive archetypes of womanhood.

One of the series’ most compelling attributes is June’s inner monologue, which is always one of resistance and an affirmation of her humanity. The setting of the series is extremely dystopian, but the most engaging, and the most disturbing, characteristics of life in Gilead are those that we must recognise as heightened aspects of our current reality. The recent incident of a pregnant girl in Ireland, sectioned inside a mental hospital by her psychologist for wanting an abortion, the police raids of abortion activists’ homes in March of this year, the Trump administration’s bill allowing states to withhold funding to abortion providers – all offer glaring examples of the ways in which capitalist regimes, often in arm with religious institutions, seek tight control over women’s reproductive fates. In Maryland today, rape victims can be forced to negotiate with their rapists for custody of the child. This is to say nothing of expressly theocratic states that can be compared to Gilead with little exaggeration.

The women are forced to relinquish their former identities. June, our protagonist, becomes “Offred” a portmanteau of her master’s name, Fred, and “Of”, denoting her status as his property. In the series it serves as a constant reminder of the Handmaids’ dehumanisation. But according to the ideology of the “traditional” family, in which many capitalist regimes the world over are still invested, it has been the case for centuries that a female child is expected to adopt her father’s name at birth and her husband’s upon marriage.

In Atwood’s original novel, the Republic of Gilead is a racist as well as a sexist society. The series has come under fire for ignoring issues of racial oppression that would accompany any right-wing coup like the one it portrays. But Gilead is also a class society. In one scene, Offred’s inner monologue tells us the Commander’s driver is “low status”, and we know this because he “hasn’t even been assigned a woman yet”. But class relations are particularly stark in the stratification of women and how the women of different classes interact.

Even though no woman of any class may read, hold any kind of office, or own property, the elite Wives’ relative privilege does not incline them to want fundamental change. They join in the oppression of their Handmaids, and in doing so, entrench their own oppression. This betrayal is highlighted by the fact that Mrs. Waterford, Offred’s mistress, is a former influential feminist activist turned religious fundamentalist, and retains some resentment of her exclusion from politics. It is a striking analogy for the complicity of “elite” or “corporate” feminism in the oppression of working class women today – the kind of feminism that reasons Hillary Clinton, with her anti-working class politics that disproportionately impact women, offered a progressive choice for the US presidency.

Conservatives have been quick to name The Handmaid’s Tale a lesson in Islamic extremism, while deflecting attention from its other parallels. Telegraph columnist Tim Stanley writes: “some see this TV show as a comment on Trump and the American religious right. That’s shallow. The idea that conservative Christians want to turn America into a medieval theme park is absurd.” Salon magazine responds to this line of thinking with an article entitled: “Watch these conservatives do mental gymnastics to convince themselves ‘The Handmaid’s Tale’ isn’t about them.” The first season closes with the series’ most promising message: that resistance to even the most repressive regime is possible through solidarity, and with a dawning realisation among the Handmaids that the system is completely reliant on their reproductive role, not unlike capitalism’s total reliance upon the labour of workers.