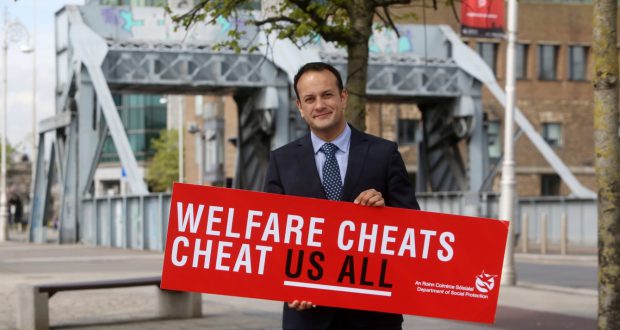 The election of Leo Varadkar, first as leader of Fine Gael, then as Taoiseach, has been hailed by the international media as an important change.

Varadkar is an openly gay man and the son of an immigrant, and the election of such a man as Taoiseach would have been unthinkable up until relatively recent times.

This reflects positive social changes driven in large measure by LGBT community campaigning work based on the ideas of justice and solidarity.

Hostility to the left

However, Varadkar taking the Taoiseach’s chair was an important change for trade union activists, social justice campaigners and those who support the left for another reason too: this was the election of a particularly right-wing Taoiseach.

Fine Gael, of course, has always been a right-wing party, Varadkar’s rival for the FG leadership, Simon Coveney, is a right-wing politician too.  However, there’s something about Leo.  He makes no attempt to appear as all things to all men, he clearly stakes out right-wing positions, and he makes no bones about his hostility to the Left.

Although he likes to project himself as a politician of the “centre”, defending the “centre ground” against the perceived “extremes”, his unapologetic right-wing nature makes him the closest thing Irish politics has seen to a classic Tory politician.

Like his colleague of the “European Centre”, France’s Emmanuel Macron, he will take up positions that cut strongly against the interests of the working class and will clash sharply with the left.

His “Welfare Cheats Cheat Us All” campaign deployed classic Tory “strivers versus skivers” tactics to court the right-wing Fine Gael rank and file vote in the leadership election and win the support of a section of workers who have been affected by media lies about welfare fraud.

His comments about representing “the people who get up early in the morning” were aimed at tapping into the same attitudes and at winning support from some private sector workers who have bought into media propaganda about “cosy” conditions for public sector workers.

The support Varadkar voiced for banning or restricting the right to strike for some essential workers gives the lie to any idea that his policies might be worker-friendly.

The right to strike is an essential workers’ right and an essential human right.  A ban for a few categories of workers would be the thin end of the wedge.  Big business and other employers would quickly demand further restrictions.  This is the type of agenda Varadkar would like to implement.

The decision of Varadkar’s cabinet to end the freeze on bin charges is another sign of this right wing agenda.

However, the decision to postpone implementation of a new charging regime to September shows the weakness of the Varadkar government.  They are haunted by the ghost of the anti-water charges movement and hampered by their minority position in the Dáil.

The latter may prompt Varadkar to consider a general election in the next year in an attempt to strengthen the Fine Gael position.

However, the stronger the attacks the stronger is the potential for a backlash.  The sharper the right wing edge to the policies the more the left can be brought into play.  If the left plays its cards well the election of this most right wing Taoiseach could well spur the left to a position of strength unseen in recent times in this country.