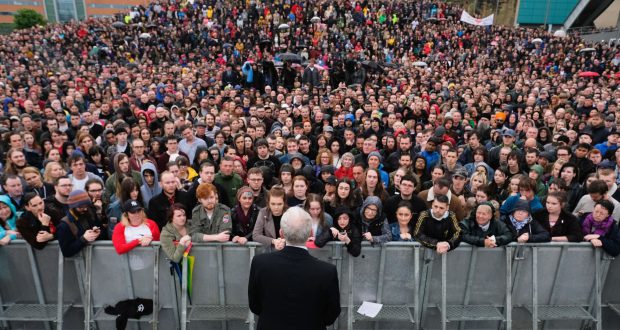 “Corbynomics” & the need to challenge capitalism

If the leaking of Jeremy Corbyn’s manifesto mid-way through the long election campaign was designed to damage him, it had the opposite effect.

The manifesto became one of the vital factors in creating one of the most dramatic turnarounds in recent history. For some commentators and the Blairites in his own party it seemed an impossibility that Corbyn could do well. His programme was of a by-gone era and would never win support from a significant portion of society.

In fact it was because of who Corbyn is that people had hope in his programme. It is not difficult to see why people, particularly the young, women and workers responded. Completely disconnected from the reality of the mood, the Tories were proposing more cuts and attacks on living standards.

The limits of reformism

While the situation is significantly different in many ways, his policies would have had echoes of the early years of Chavez’s Bolavarian revolution and the reforms it granted.

Taking on the capitalist establishment in Venezuela was a serious business, but even more so in Britain. It would be imperative for the capitalist class internationally to undermine such policies and a government that would try implement it. In this, undoubtedly they would receive much assistance from the Blairite apparatus and MPs who still pre-dominate the Labour Party.

While Corbyn’s programme included the very welcome re-nationalisation of railways (over time), energy, the water system and the Royal Mail, it wasn’t based on actually taking public ownership and democratic control of the key wealth producing sectors of the economy and using them as part of a democratic socialist plan of production. It was fundamentally based on increased taxation of the wealthy and big business and borrowing for capital expenditure.
Corporation tax was to be increased, up a number of percentage points to 26% and all those on more than £80,000 and £123,000 a year, would have their income tax increased to 45% and 50% respectively.

Corbyn and McDonnell understated what could come in from such policies, reflecting that they expected big business and the rich would try take measures to avoid paying even this. They estimated their tax changes could bring in an additional £50 billion approximately.

This would really only scratch the surface. The thousand richest people in Britain have wealth in excess of £658 billion and increased their wealth by £83 billion in the last year alone.

Yet Corbyn’s manifesto acted like a beacon. It and the momentum it engendered has helped solidify the view that austerity and neo-liberal attacks must end and has provoked a discussion about what type of change is necessary and even about what socialism is.

In this, it has played a vital role. At the same time it is also vital that goals are matched by the policies that can actually ensure they are achieved.

Corbyn and McDonnell are completely correct to expect that the capitalists won’t play by the rules. The capitalist market creates inequality and it is impossible to develop just solutions to the problems we face based on a rigged system.

Their proposals don’t even go as far as the “mixed economy” based on private and public ownership of its resources envisioned by some in the Labour Party up until the 1980s. The vast bulk of the economy and wealth would remain in private hands. Corbyn and McDonnell’s income and spending targets could therefore be sabotaged by business interests, and so their election promises, important but limited as they were, could be shipwrecked. They would also be at the mercy of the financial markets through their borrowings and be affected and even controlled by negative developments in the actual economy.

To achieve the goals outlined in the manifesto and to repair the damage and devastation of neo-liberal cuts to public services over decades and to create the investment necessary to create secure jobs and a secure future and to be able to defeat the attacks of big business, Corbyn’s Labour would need to decisively break with the system of capitalism.
If Corbyn gets elected, the establishment will try to move against him. But if and when they do, they could unleash a mass reaction in defence of Corbyn and such a movement could encourage or force a Corbyn government to go much further. The lesson from Venezuela is not that Chavez went too far, it’s that they didn’t go far enough when they had the opportunity.