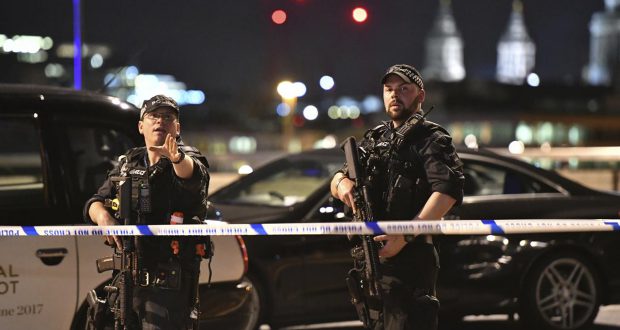 Less than two weeks after the horrific Manchester bombing another atrocity has taken place, this time on London Bridge and in Borough Market. Seven people, out enjoying a summer Saturday night in London, were killed, with at least 48 more injured.

The Socialist Party completely condemns this terrible attack. Like Manchester and so many other similar incidents in Britain and worldwide, such as the car bombing in Baghdad on 19 May, the London attack was designed to maximise the completely indiscriminate random slaughter of ordinary people. While it has not yet been confirmed it seems that this attack was again inspired by the completely reactionary, barbaric ideology of ISIS.

Again, just as in Manchester, the people of London responded – not least workers in the NHS and emergency services – with a wave of solidarity, offering every possible kind of assistance to those affected. It has been reported that some present during the incident heroically tried to take on the attackers, armed only with the chairs they had been sitting on enjoying a drink moments earlier. The huge wave of solidarity from people in Britain and around the world has nothing in common with the hypocritical reaction of Tory government ministers who have implemented policies that create the conditions for these atrocities and are now cynically attempting to use them to boost their election chances.

Election campaigning has been officially suspended for the day, but Theresa May immediately broke this, blatantly attempting to use this horror to try and rebuild her claim to be ‘strong and stable’ after showing herself to be completely ‘weak and wobbly’ in the course of the election campaign. She has already suggested the need for new ‘anti-terror’ legislation. However, there have been numerous new ‘anti-terror’ laws introduced in recent decades and none have stopped new attacks.

May also outrageously declared that “there is far too much tolerance of extremism” in Britain. This is completely untrue. The vast majority of the population of Britain, including the overwhelming majority of Muslims, are completely opposed to terrorism. Unless of course she means the Tory government’s continued support for arms sales to the brutal regime in Saudi Arabia, regardless of the funding of ISIS and other jihadists that wealthy Saudis have engaged in. Jeremy Corbyn has rightly declared his government would stop such sales.

May’s use of the blanket term ‘extremism’ rather than terrorism in her speech was not accidental. It is an entirely cynical attempt to smear anyone who she considers extreme; that is anyone who opposes the capitalist system – with its brutal austerity, poverty and war – of which she is an arch defender.

She also had a scurrilous sideswipe at the ‘public sector’ – suggesting that supposed ‘extremism’ within it needed ‘stamping out’. Jeremy Corbyn responded to these lies well, pointing out that public services, including the police, have been cut to breaking point under Tory rule.

The continued surge in support for Jeremy Corbyn after the Manchester atrocity shows that millions of people are not fooled by her smears. On the contrary, they recognise that the Tories’ savage cuts to public services – including the threatened closure of at least one of the South London hospitals treating the victims of last night’s attack – make it increasingly difficult to prevent, and deal with the consequences of, terrorist attacks.

They also recognise, as the Socialist Party has consistently explained, as has Jeremy Corbyn, that alongside opposing the right-wing reactionaries of ISIS and their ilk, which use fascistic methods to try and create extremely repressive semi-feudal regimes, with no rights for the working class, it is also necessary to oppose the imperialist wars and interventions in the Middle East and Afghanistan which have created a nightmare for the peoples of the Middle East and inevitably increased the likelihood of terrorist atrocities worldwide.

In just a few days’ time, we will have a chance to kick the Tories out. The election of Jeremy Corbyn as prime minister would be a big step forward for the workers’ movement in Britain.

Of course, it would be a beginning, not an end. It is clear that the Blairites in the Labour Party, themselves responsible for Britain’s participation in the imperialist wars in Iraq and Afghanistan, would continue in their attempts to sabotage Jeremy Corbyn’s leadership, backed to the hilt by the capitalist class. Nonetheless, his election would give confidence to millions of working people, both in Britain and to some extent internationally, that it is possible to fight for a society free from the austerity, poverty, terrorism and racism that capitalism creates.