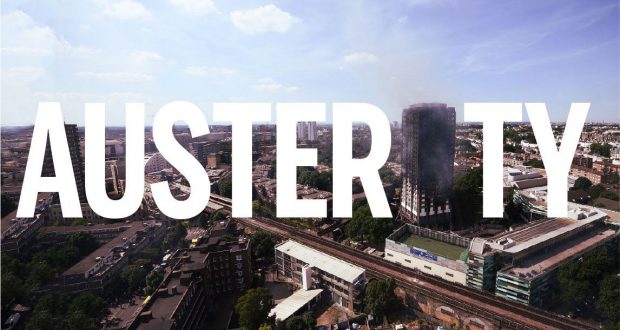 From the editorial of “The Socialist”, newspaper of the Socialist Party in England and Wales

As more details emerge and the death toll rises, it becomes clearer and clearer what a terrible disaster this is. The fire spread with horrifying speed and witnesses describe heart-breaking scenes as people desperately tried to escape.

It is a huge tragedy for the immediate community. Children have died; three generations of the same family have died. But rather than being torn apart, the community has come together in a remarkable display of human solidarity, supporting each other, collecting donations of goods and money, organising emergency accommodation, coordinating relief.

The heroism, the courage, the self-sacrifice of the emergency services and of local residents is incredible. Who can fail to be moved by the scenes of the firefighters being applauded as they drove away from the scene?

And there has naturally been a much wider outpouring of sympathy with the residents and families affected, with overwhelming donations of money, clothes, bedding, toys, nappies, etc. The true face of humanity has been shown in this solidarity.

But at the same time there is massive anger. Anger at the council, at the housing management company, at the contractors who did the refurbishment, at the government and at the system as a whole. Many residents are sure that the death toll will be far higher than currently stated and that facts are being hidden.
It is not only the Socialist Party or other activists that say it, the residents in the local area say it themselves: this is about rich and poor, an arrogant disregard for the lives of working class people. This is a diverse community, many of whom are black or Asian, living in a poor working class area alongside immense wealth of the super-rich.

After years of being ignored by the council, some of the tenants who campaigned for fire safety in the block have been killed. Two women who were threatened with legal action by the council are missing, presumed dead. They faced obstacles in their campaign for safety, including cuts to legal aid which meant they could not afford legal representation. But they have left a legacy in writing.

Anger is huge at the council’s apparent arrogance and ineptitude in response to the crisis. For two days after the disaster the council and government were barely present, everything was organised by the community.

Over £5 million has been donated, which is amazing, but it is dwarfed by the reserves held by Kensington and Chelsea council. According to their accounts, they sit on £300 million in usable reserves. They have been running a £15 million annual surplus on housing – taking £54 million in rent and service charges and spending £40 million on housing – adding to reserves. Yet they scrimped to save £5,000 on the cladding and £200,000 on sprinklers.

This is from a council whose deputy leader and cabinet member for housing, Rock Feilding-Mellen, comes from a family estate in Gloucestershire of 5,000 acres with a 300-foot single jet fountain, the tallest gravity fountain in the world!

The emergency re-housing situation is a scandal, with survivors scattered in hotels. In World War Two, bombed out families were rehoused in 24 hours!
Staggeringly, it is now emerging, according to David Lammy MP, that survivors who do not want to be rehoused around the country, eg in Preston, are being threatened with being declared intentionally homeless!

If this continues, local fury will rightly grow. The council and government are being advised to rip up housing policy, so that no resident is at risk of losing their right to be housed if they refuse accommodation that is unsuitable.

Face of the Tories

The true face of the Tories, as representatives of the profit-seeking capitalist class, has been laid bare. Theresa May’s own empathy-free response is just one element. People are sharing widely the video of Boris Johnson sat in City Hall scoffing at complaints about fire service cuts.

Similarly the article and speech by David Cameron bragging he was going to “kill off the safety culture” – “I want 2012 to go down in history not just as the Olympics year or Diamond Jubilee year, but the year we got a lot of this pointless timewasting out of the British economy”. As our articles expose, Tory housing minister Gavin Barwell, now Theresa May’s chief of staff, scandalously sat on recommendations from the Lakanal fire in Southwark in 2009.

It cannot be clearer that austerity kills. But this is more than the last seven years of Tory austerity. It is decades of cuts, privatisation, deregulation, relaxation of planning, lack of democratic accountability. It is money-grubbing cost-cutting, scrimping, short-cuts in the pursuit of ‘savings’ and profit. The Times reports that senior Grenfell managers shared £650,000 in pay. From Margaret Thatcher to Tony Blair to David Cameron, this is rampant neoliberalism.

The development of council housing was a huge step forward for working class people; but working class people only have what they have fought for.
As the Socialist has explained previously, the post-World War One government subsidy for council housing was in response to mass rent strikes and the Russian Revolution. The parliamentary secretary to the Local Government Board said: “The money we are going to spend on housing is an insurance against Bolshevism and revolution”. The 1945 Labour government created the welfare state, including large scale council house building.

But the rich have never accepted a social responsibility for housing and their political representatives have spent the last 35 years dismantling it. Thatcher’s Right to Buy legislation in 1980 forced councils to sell off homes at a massive discount to tenants.

One million houses were sold within ten years. At the same time, spending restrictions reduced new council house building. Then in 1988, Large Scale Voluntary Transfer enabled the moving of housing stock from council ownership into housing association control, which was then massively accelerated under Tony Blair.
It was New Labour who ran with bringing profit into public housing through the Private Finance Initiative and who vigorously pushed ‘arm’s-length management organisations’ (Almos), stripping out democratic control of social housing and handing it over to the private sector. In 2000 New Labour deputy PM John Prescott predicted “the end of council housing”. Jeremy Corbyn was one of a tiny number of Labour MPs who opposed these measures.

It results in a lack of accountability and control by tenants or elected councillors over management organisations. They can try to defend themselves by saying there are tenants on the boards, but they have no power. Housing campaigners believe there is a concerted attempt now to derecognise Tenants’ and Residents’ Associations across London.

Now the Tories want to effectively end social housing altogether, including deregulating housing associations, and to reduce planning controls even further.
The net result is that the conditions of a hundred years ago, of overcrowding in dangerous conditions, in which working class lives are sacrificed for profit, are back.

In the same week as the Grenfell fire, it was leaked to the Guardian that Charing Cross hospital, currently treating survivors, faces devastating cuts that would reduce it to 13% of its current size, effectively a clinic.

And as with the recent terrorist attacks, this horrendous event also brings into sharp focus the fact that the number of firefighters has been cut in London by 550, with ten stations closed and others with appliances reduced. London mayor Sadiq Khan should reverse all cuts to the London fire service.

All this is having a profound effect on consciousness – about housing, but also about the way society is organised. The anger is expressed in terms of ‘the rich and the working class’. No wonder Jeremy Corbyn has been so popular in the area – not just because of his human response, but because of the break he potentially offers from brutal austerity policies.

Theresa May and the Tories were already in crisis, which this fire and the fury of the local community and working class more widely could deepen and bring to a head.

As well as offering our deepest sympathy and solidarity with the residents of Grenfell and the local area, Socialist Party members are also raising ideas about what could be done. We argue that tenant organisation and action, and decisive action by the trade unions, could bring not only speedy justice to the survivors of Grenfell and the community, but win the immediate safety for all residents of tower blocks and mass housing.

The call for a million on the streets on 1st July, for the trade unions to lead a mass demonstration and coordinated strike action, could be decisive in piling on the pressure on the Tories for another general election.

The Socialist Party backs Corbyn’s housing plans but they could go much further. As well as abolishing the bedroom tax it is essential to end the benefit cap too.
A socialist housing policy would mean massive investment in council housing, including rebuilding many existing estates; rent controls that control the actual level of rents, not just increases; and democratic nationalisation of the banks, land and building companies to provide safe, secure, and genuinely affordable homes for all.