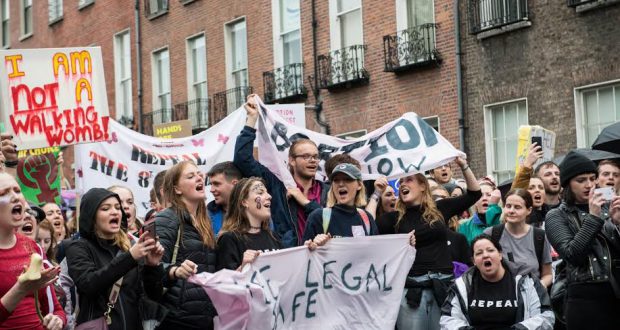 The Citizens’ Assembly was established, not only as a government and political establishment delay-tactic in dealing with the 8th amendment, the consitutional abortion ban, but also quite clearly to manoevre to ensure that only limited change would be endorsed. It aimed to give a cover to politicians and an excuse to hold back on the growing demand from below for sweeping change, writes Laura Fitzgerald.

This was reflected in the fact that while rape and fatal foetal abnormalities were allocated weekends for discussion at the Assembly as directed by Judge Laffoy, women’s health was not even covered as a a central topic. The Citizens’ Assembly, not only ended up advocating that an abortion rights referendum be held, but in the final set of votes – pertaining to what legislation should be in place when the 8th is removed – voted in essence overwhelming to trust women and pregnant people to make their own decisions about their own bodies. It prioritised women’s health, and overwhelmingly had a strong pro-choice thrust to all its votes.

As well as the obvious ones of Fianna Fáil and Fine Gael, this includes the Greens, Labour, Sinn Féin and the Social Democrats (the latter seem to be now endorsing the Citizens’ Assembly recommendations, but before its position was ‘repeal’, but not pro-choice). This underscores both how backward the political establishment is in this state, but also the degree to which the Citizens’ Assembly outcome represents a major political crisis for the government and political establishment as a whole.

It is worth analysing why the Citizens’ Assembly came up with the pro-choice decisions that they did. A polling company chose the 99 “citizens”, reflecting relatively scientifically a cross-section of society. However, this was skewed because anyone who had expressed any opinion on abortion previously on social media, was ruled out – this would rule out a decent chunk of the largely pro-choice and active-online young generation. With many pro-choice, as well as anti-choice organisations presenting to the Assembly, what came out of it shows that when ordinary people are presented and engage with the facts on abortion, that a pro-choice sentiment will emerge as a significant majority.

This illustrates the potential that a pro-choice referendum campaign that grows as a mass movement could have a huge impact in turning the majority of the population to a fully pro-choice position, something that has been the direction of travel for years. Furthermore, when anti-choice organisations presented to the Assembly that were connected to the Catholic Church, questions came from the Assembly members that raised, “after Tuam, why should we listen to you?”  This shows how the movement for repeal and abortion rights is implicitly part of a broader struggle to break with the repression of the past, and to separate church and state once and for all.

This means challenging the outrageous gifting of a new national maternity hospital to the Sisters of Charity and related questions about Church involvement in health and education. They not only are part and parcel of this struggle, but illustrate the need for a mass movement for change given the backward nature of the political establishment, that also seeks to build a political alternative of the left. We fundamentally need a left Government that would seek to fully sever the Church-State nexus, recognise that religion is a private matter and a question of personal freedom, but no religion should be influencing public institutions.

Ruth Coppinger on the Dáil Committee will first and foremost intervene to say that there cannot be any more delay. There’s no need for the Dáil Committee to drag out and examine all the questions again. It’s clear, the 8th amendment abortion ban has got to go, there can be nothing in the Constitution blocking women’s health and right to abortion, and that there should be a date for a referendum named to that effect for this Autumn. Secondly, Ruth will oppose any ‘watering down’ of the pro-choice spirit of the Citizens’ Assembly. The establishment parties will not want a referendum without clarity on what legislation will follow. It simply cannot be accepted that the broad grounds – request, socio-economic, health – that the Citizens’ Assembly endorsed be ignored.

The only way to ensure this is to build a massive campaign of political pressure on all the parties to push this. Mass mobilisations for choice, as well as new pro-choice community and youth organisations at a local level exerting pressure on TDs in every Constituency, including those on the Dáil Committee of course, needs to be built for.

Comments from Fianna Fáil leader, Micheál Martin, in which he expressed his view that those pregnant as a result of rape should be forced to remain pregnant, is the starkest example of the gulf between the attitudes of the majority of the public and those of the political establishment. Building a major political challenge of the socialist left must go in tandem with a mass movement of campaigning, protesting and mobilising on the ground, in order to sweep these backwoodsmen out of power once and for all.