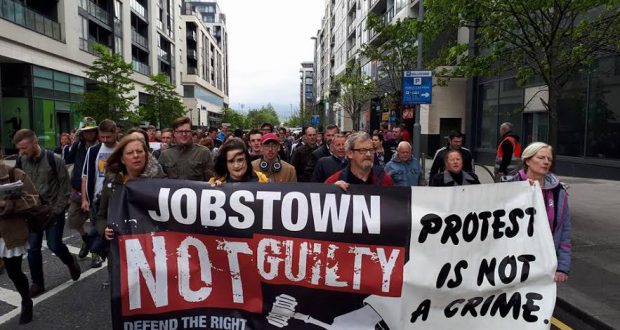 As Jobstown stands tall- Labour is in the gutter

Immediately after the protest in Jobstown in 2014, Joan Burton went to Garda Headquarters in the Phoenix Park, and what began was a polital joint venture involving two wings of the establishment.

The Gardaí wanted prosecutions to help re-assert their authority and control in the many communities who had resisted the Gardaí’s action and political policing to support Irish Water’s imposition of meters.

From the trial, it is clear that Joan Burton was immediately considering how she could get some personal political advantage from events. On top of that the government, who had been anxious to split the new mass water charges movement, clearly felt that with the help of their friends in the media they could pose Jobstown as a violent riot and weaken the challenge their policies were facing.

Given the seriousness of the case, undoubtedly the Labour Party itself has been fully behind Joan Burton’s desire to get convictions.  In the witness box Joan Burton asserted that as a leader of Labour she politically descended from James Connolly, and claimed to “carry on his ideas”. Linking Connolly to this attempt to criminalise working-class protest is just the latest disgraceful denigration by the Labour Party of the tradition of those who built the labour movement.

In a time when the election of Jeremy Corbyn as leader of the British Labour Party has raised the prospect that it could possibly be reclaimed from the stranglehold of the ultra-capitalist Blairites, the actions of Labour here and Burton’s testimony are the last nails in the coffin of the party here. The Rubicon is not just a river in Italy, it is a line that has been crossed so many times by the Labour Party that now nothing remains of Connolly and Larkin in that party.

In the witness box, Burton defended Labour’s, and her own, record in government, in an attempt to try to deny that there was any basis for an angry protest. Even when videos were shown where everyone in the court could see and hear what was going on, she tried to deny that there were political chants.

But it’s the content of Joan Burton’s and her political adviser’s evidence and testimonies which really show that class prejudice now dominates in Labour, notwithstanding that many trade unions are still formally linked and fund the party.

In her desire to get convictions she distorts practically everything. She referred to the protesters as “wild” and stated that she was “running for her life”. In the dock, her adviser, referred to those present at the end as “dregs”. This is about a community that they viciously assaulted through their policies; a community that despite all the hardship it has to put up with, voted 87% in favour of marriage equality in 2015. The working-class people of Jobstown stand tall, Labour is in the gutter.

In its voracity to go after the right to protest, Labour and the establishment have targeted eighteen people on charges of false imprisonment and violent disorder, taking groups of protesters to court at a time (with seven on trial at this time). That has meant that, having given her evidence, Joan Burton could be cross-examined seven times.

Under instruction from the defendants, which includes Paul Murphy TD and members of Solidarity and the Socialist Party, the barristers for the defence have not only seriously challenged the distortions of Burton, but have also exposed the rotten political role of the Labour Party.

Labour betrayed people in government. Now, intent in defending themselves they have a vested interest in attacking working class people and democratic rights in the courts. They are beyond the pale. Whatever happens in the trial, it is clear that workers, women and the young need to build a new political movement to fight for real change, the day has long passed for the patching up of Labour, it must go.