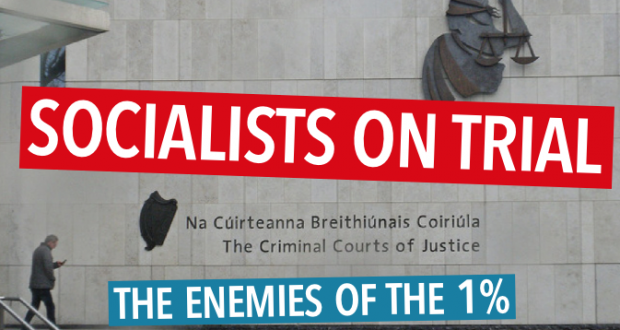 Eddie McCabe and Cillian Gillespie look at why socialists are being attacked and vilified by the capitalist state and establishment.

1) We don’t play by their rules. We don’t compromise on our principles.

The capitalist establishment fear the Socialist Party because:

They can’t understand us. We run in elections, but we’re not completely election-focused the way they would like, because we know that fundamental change can’t just happen through parliamentary elections – a rigged set-up that gives the illusion of choice when real power in capitalist society always remains with the super-rich and big business. Only mass political and social movements can bring real change, and our election campaigns and elected representatives are geared towards building such movements.

They can’t buy us. We don’t take money from business interests. We rely on donations from our members and supporters to fund our campaigns. Our TDs live on a workers’ wage because they represent working-class people.

They can’t make backroom horse-trading deals with us. We don’t play their game of cynical political manoeuvring. We bring the struggles and issues that concern workers, women, LGBTQ and young people to the political arena, while never conceding an inch to backward, right-wing and anti-democratic ideas and institutions.

They can’t intimidate us. The Socialist Party has been subject to many witch-hunts over the years, whether by the media, the state or bureaucrats in the labour movement. But as the song says, where “cowards flinch and traitors sneer, we keep the red flag flying here.” We expect the attacks, and we come back stronger.

2) We speak the truth and expose their unjust system.

James Connolly once described the socialist movement as “The Great Anti-Theft Movement.” By this he meant that what passes for everyday economics under capitalism is actually just an organised robbery of the majority by a tiny minority.

The Sunday Independent’s new rich list (April 2017) informed us that the richest 300 people in Ireland have doubled their wealth since 2010, from €50 billion to €100 billion! While Ireland’s super-wealthy have cleaned up in the last seven years, we’ve been subject to: austerity taxes; slashing of public services; a race to the bottom in our wages and conditions; soaring rents and unaffordable homes.

But this is not an aberration. It is the fundamental logic of a system where wealth and profits are obscenely amassed at our expense. Capitalism has never been more parasitic, driving down our living standards and bringing about the destruction of our planet.

It is also inherently unjust and undemocratic. Working-class people – be they builders, teachers, cleaners, drivers, engineers or factory workers, to name but a few – create the profits and provide the services that make the capitalist economy function and allow the 1% to amass their wealth.

Through our collective labour we can create the wealth and technology needed to end hunger and insecurity and fully meet the needs and wants of all. But we can only do this if we end the rule of the billionaires, banks and corporations who squander and hoard the wealth we create.

The Socialist Party proudly advances an alternative: a democratic socialist society where the wealth and resources of society are taken out of the hands of a corrupt and rotten oligarchy. And we actively organise to bring such a society into existence.

The establishment don’t just fear our ideas, but our actions too.

We don’t accept the limits or constraints of the market system which perpetuates inequality. Rather we look at the actual resources in society and the needs of people. So we always demand more than what

the system offers. And this gets results.

As Connolly also aptly wrote: “Yet, although it may seem a paradox to say so, there is no party so incapable of achieving practical results, as an orthodox, political party; and there is no party so certain of placing moderate reforms to its credit as an extreme revolutionary party.”

For a small organisation the Socialist Party has always punched above our weight. Whether we win or lose, our record of assisting, encouraging and often leading working-class struggles shows that we fight to the last, making the task of exploiting, discriminating and repressing that bit more difficult for the ruling class.

The strength of our approach to struggle comes from our understanding that all the conflicts between ordinary people and those in power reflect the deep-rooted class divide in society: one that pits the political establishment, the legal system and the media against the interests and organisations of the working class and the oppressed. This understanding, which is necessary to reach a correct assessment of the balance of forces in any given battle, underlies all of our strategic and tactical decisions, and it makes us effective.

In Ireland over decades we’ve helped many workers achieve victories in disputes, most notably the famous GAMA strike – involving migrant workers being paid €2 an hour at the height of the Celtic Tiger. We have twice played a key, leading role in defeating water charges – by championing the decisive boycott tactic – both in the recent campaign and in the Dublin campaign of the 1990s.

Our international sister parties have likewise shown how to force concessions through determined people power movements. In Britain, we led the (18 million strong) non-payment campaign against the poll tax that brought down Margaret Thatcher. In the US recently, we led the campaign for a $15 minimum wage in Seattle –which sparked a nationwide movement and many more victories – and elected the first socialist city councilmember in 100 years, Kshama Sawant.

4) We represent what they fear most:solidarity amongst the 99%.

“The great appear great because we are on our knees; Let us rise!” These words were the rallying cry with which Jim Larkin and James Connolly built the trade union and labour movement in Ireland. It sums up a central idea of socialism and the working-class movement.

Socialists have confidence in the power of working-class solidarity. It is through active collective organisation and struggle that working-class people and the oppressed can win real victories against the capitalist system.

It was determined and united industrial action by Luas workers last year that resulted in them defeating attempts by Transdev to undermine their wages and conditions, as well as winning a pay rise. It was working-class people coming together from 2014 onwards in a campaign of mass protest and non-payment that forced the government to suspend the water charges last year.

When President Trump came to power and issued the notorious ‘Muslim Ban’, it was mass protests uniting working and young people throughout the US that forced the courts to overturn it.

In the North, no strike has ever been broken by sectarianism. In fact, it was united strike action by Protestant and Catholic workers which defeated sectarian attacks and intimidation by paramilitaries.

This is the kind of solidarity that the 1% and their representatives dread. They want to atomise and divide us and make us feel powerless when they attack our rights. The Socialist Party consistently promotes and builds the maximum unity of all sections of the working class, young people and the oppressed.

Only in this way can we win battles such as those for abortion rights and pay justice, defeat the neo-liberal attacks on our living standards and ultimately transform society in our interests.

5) Capitalism is in crisis & socialist ideas are on the rise.

One hundred years ago, capitalism and landlordism in Russia were overthrown by a mass, democratic uprising of the working class. The impact of this event reverberated around the world, inspiring workers and horrifying the ruling elite. To this day they shudder at the thoughts of a repetition, and for good reason.

The global capitalist system remains engulfed in the crisis that erupted in 2008. Stagnation or low growth rates and high unemployment are the norm for the world economy, despite trillions in bailouts and austerity across the world. The OECD estimated in 2014 that this sluggishness would continue for 50 years. In fact, that’s an optimistic best case scenario.

The woes on the economic front are reflected on the political and social ones. The traditional parties of the establishment everywhere, but particularly in Europe, are becoming more discredited, and their position is being challenged by right and left populist parties from outside of the establishment. They can no longer rule in the old ways.

Once again, with the system incapable of providing for people’s needs and expectations, millions are looking for alternatives. Socialism was the most looked-up word in 2015. Polls consistently show that a new generation in the US and Britain holds a more favourable view of socialism than capitalism.

Socialism – which means real democracy and planning of the wealth and resources in the economy to meet the needs of society and the planet – is the alternative to capitalism. It’s an idea that’s on the rise. The capitalists and their representatives know this, which goes some way to explaining their current attacks on socialists.