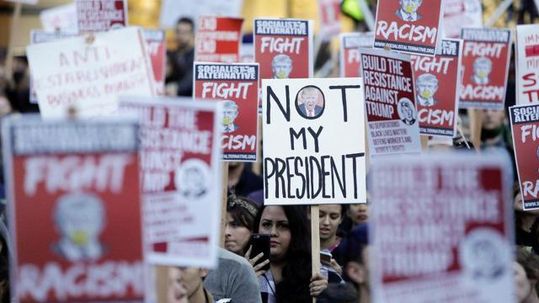 A socialist strategy to defeat Trump

When Trump was elected last November in what can only be described as the most contentious protest vote of our lifetimes, questions were raised as to whether his Presidency would play out as threatened. Just one month from his inauguration and already it is clear that America’s new commander-in-chief is determined to implement his regressive agenda.

However, this has inspired unprecedented resistance to this new regime. Out of these movements a new left-wing force in the US can emerge. The explosion of energy that has erupted against Trump’s waterfall of executive actions represents an oppositional front, catalysed under the mass movements for Bernie Sanders and united by a rejection of the racism, misogyny and billionaire establishment that Trump represents. The women’s march on 20 and 21 January saw cities across the country, including the nation’s capital, screech to a halt as millions made themselves visible as part of the growing resistance.

The mood, and the collective fervour has only intensified. The so-called “Muslim ban” was met with thousands occupying major airports across the country. We saw the largest New York City taxi union join in, withdrawing their labour from the airports. In their statement, the drivers affirmed the nature of the protests; “a working-class movement rooted in the defence of the oppressed.” In subsequent days thousands of New York City bodegas (corner stores), standing testaments of the city’s deep dependence on immigrants, closed in protest.

The establishment buckled under the pressure. Legal challenges flooded into the courts, mayors announced their intention to defy the ban, and eventually it was halted—at least for now.

Americans are simultaneously witnessing the successes of collective action and the failure of the Democratic Party to meaningfully oppose Trump. They cleared the path for his ascension to the Presidency by sabotaging the left challenge provided by the Sanders campaign, and by continuing to play politics with Trump in a concerted effort to prop up the crumbling establishment.

Fourteen Democrats, including Hillary’s running mate Tim Kaine, have approved all of, save Betsy Devos, Trump’s disastrous, anti-working class appointees.  Elizabeth Warren, a supposed progressive beacon in the Democratic Party voted to confirm appointees like Ben Carson to secretary of housing, an appointment which threatens the millions who depend on social housing. Chuck Schumer, tipped as the future of the party, voted to confirm almost every nomination, including Mike Pompeo, a far-right Republican who, as the new director of the CIA, has left the door open to the use of torture.

The Democrats have been exposed, and it is quite obvious that they stand inextricably tied to their corporate donors and will do all that is necessary to keep the government functioning.

But the truth is that these diametrically opposed responses to Trump’s administration light the way forward and it’s clearer than ever what the strategy must be.

Trump has neither the mandate of the US electorate, with just a 38% approval rating and falling, nor the uncritical support of the millions of workers he conned into voting for him. What he does have is an energised opposition made up of the momentous movement for Bernie Sanders, immigrants, women, climate change activists, DAPL protestors and important sections of the US working class.

We must build a broad left movement that bases itself on the principles central to defeating trump, and to providing for equality unrealisable in a capitalist system. Socialist Alternative (the Socialist Party’s sister organisation in the US) has argued that such a left must break with the corporate controlled Democratic Party machine.

We must unite under a progressive, socialist, and international perspective and realise the lessons of the last month; that when working people fight, they win. Planned actions for scientists on Earth Day, women on International Women’s day, and by immigrants must be strengthened and unified. The all-out general strike called for May Day is one such opportunity, with left labour leaders calling for action and opening up the discourse within unions to expose the anti-working class nature of Trump, and both sides of the political spectrum.

The fight against Donald Trump means uniting all sections of the working class, young people and the oppressed in struggle. The hidden majority is more visible and awake than ever before, and by concentrating our sights on civil disobedience and disruption, behind a unified front independent of the politicians of Wall Street, there is no question that he can be defeated. 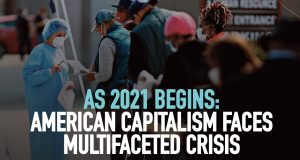