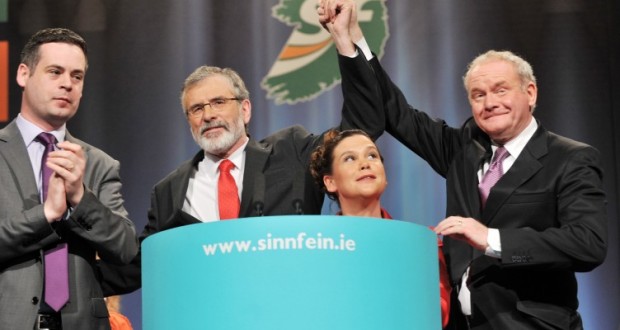 It would appear that the scandal surrounding the smearing of Maurice McCabe has drastically undermined the fate of this already weak Fine Gael minority government. The possibility of an election before the end of 2017 has increased substantially.

Such an election takes place against the backdrop of increasing industrial unrest, as it is clear that the expectations of a real increase in living standards for working-class people are not being met.

Acceptable to the establishment

As one the main opposition parties, Sinn Féin will naturally pose as a radical alternative to the present administration. However, their rightward political trajectory makes this less and less credible.

This trajectory could be seen in last year’s general election when they accepted the narrow fiscal spending rules laid down by the European Union, that would see only an additional €8-€10 billion being spent within the lifetime of this Dáil.

This is was despite the fact that €50 billion worth of austerity was implemented in the period from 2010 to 2015. They made no mention of the enormous untaxed profits and wealth in the hands of Ireland’s richest 1%. Needless to say, Sinn Féin have been willing partners (alongside the DUP) in implementing austerity in the North.

The day after International Women’s Day, Sinn Féin signaled to the establishment their “suitability” to enter government when they shamefully abstained on a vote to end the criminalisation of women who abtain abortions in Ireland. It was only recently that Sinn Féin came out in favour of repealing the 8th amendment and only favour abortion to be legislated for in very limited circumstances. Ultimately they oppose a woman’s right to choose.

At the end of January Sinn Féin’s deputy leader Mary-Lou McDonald stated that they would be willing to go into coalition with either Fianna Fáil or Fine Gael in the aftermath of the next election. This is reversal of their stated position that would only go into coalition if they were the larger party in government.

In fact Gerry Adams went so far as to renounce any adherence Sinn Féin nominally had to forming a “left government”. When speaking in an interview, he said:  “I have to say, I never really subscribed to that notion of a left-wing government, certainly not in the short-term. I mean, who are the left?” (Irish Times, 27 January)

As well as accepting the logic of the capitalist market, Sinn Féin are taking the well travelled path trodded by Labour, by willingly propping up the traditional parties of Irish capitalism in government. It is no coincidence that Adams and McDonald’s comments come in the wake of the collapse of the Northern Assembly.

The outcome of the elections in the North, which are taking place as we go to press, may likely result in another lengthy period of sectarian stalemate with the absence of a functioning executive. Sinn Féin have no doubt calculated that being in government in the South will strengthen their position in what will inevitably be a period of protracted negotiations between themselves, the DUP and the British government.

Despite the massive opposition that the new Trump Presidency has garnered in the US and internationally, Sinn Féin will be paying their respects to his new regime on St. Patrick’s Day alongside Enda Kenny. Prior to the calling of elections in the North in January, then Deputy Minister, Martin McGuinness, co-invited Trump to visit the North.

Ultimately, political parties must be judged on their actions, not on their occasional radical rhetoric. The willingness of Sinn Féin to cosy up to the capitalist establishment here in Ireland and abroad vindicates the analysis of the Socialist Party that they are not a genuine party of the left.

We need to build a powerful socialist left that will challenge the backward and rotten system of capitalism in this country and abroad.