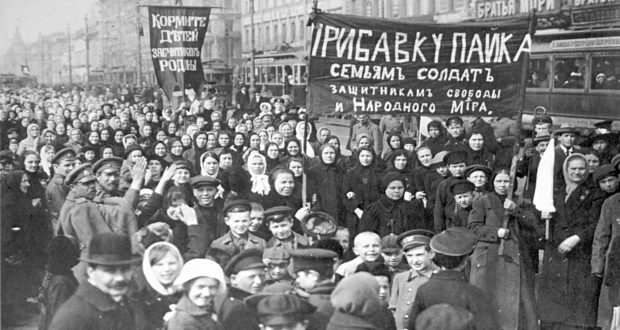 “On the morning of 23 February, one could hear women’s voices in the lane which the windows of our department overlooked: ‘Down with the war! Down with the high prices! Down with hunger! Bread for the workers!’ Myself and several comrades were at the windows in a flash…The gates of No.1 Bol’shaya Sampsion’evskaya manufactura were wide open… Masses of women workers filled the lane, and their mood was militant. Those who caught sight of us began to wave their arms, shouting: “Come out! Quit work!” Snowballs flew through the window. We decided to join the demonstration…. A brief meeting took place outside the main office near the gates, and we poured out into the street… The comrades in front were seized by the arm amidst shouts of ‘Hurray!’…”

The catalyst for revolt

This scene, described by I. Gordienko (a Bolshevik worker at the Nobel Machine Construction Factory), was repeated at factories all over St. Petersburg one hundred years ago on International Women’s Day. Women Textile workers who reached breaking point over food shortages, high prices and the war, went on unofficial strike. By the end of the first day more than 75,000 workers were in the streets and four days later more than 400, 000 on general strike. So began the February Revolution that swept away the rule of the hated Tsar Nicholas II regime and the 300 year-old Romanov Dynasty in less than a week.

As the strike spread throughout  the city, women played a key role in approaching the army and convincing them not only that they should not attack the strikers but that they had a common interest and should join the revolution.  Leon Trotsky states in History of the Russian Revolution, “A great role is played by women workers in the relation between workers and soldiers. They go up to the cordons more boldly than men, take hold of the rifles, beseech, almost command: ‘Put down your bayonets and join us’…The barrier is opened, a joyous and grateful ‘Hurrah’  shakes the air.”

It was not an accident that women played this role in the February revolution. Women were being radicalised as a result of their position in society and the pressures caused by the war. Due to population shifts from the countryside to the urban centres, the traditional role of women changed dramatically. In 1910, 68% of the population of St. Petersburg was born outside of the city.

Women in the workplace

From 1914 to 1917, 250,000 women were working outside the home for the first time. In February 1917, almost one million women workers were based in cities, with St. Petersburg being the largest. They were paid roughly half the wages of men and had worse working and living conditions.

As the war effort continued with hundreds and thousands of men sent to the front, many never to return, women were forced to become the main breadwinners, carers and have sole responsibility for the running of the

Women workers and soldier’s widows had to queue for hours for exorbitantly priced staples such as bread in sub-zero temperatures after long shifts in the mills and textile factories. Women were radicalised, militant, angry and prepared to take action. Their self-sacrifice sparked a revolution that would ultimately open a new period in history, when socialist change was put on the agenda. 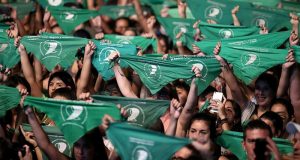