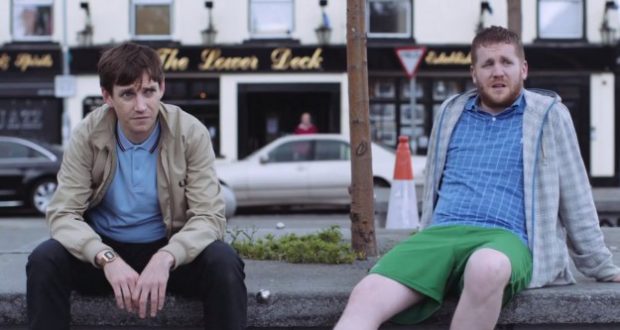 Written and performed by Emmet Kirwan alongside Love/Hate’s Ian Lloyd Anderson, Dublin Oldschool is a two man show that soberly takes the audience on a drug-addled misadventure. Jason (Kirwan), a wannabe DJ whose ambitions seem to be constantly dashed by his tortured relationship with the ‘sesh’, bounces about to the city’s rhythms that blast from its clubs, its people and, above all, its language. Kirwan seems nothing short of obsessed with the possibilities of expression latent in the Dublin dialect, here pushed to its limits.

The minimalistic set of two microphones on a dark empty stage alights to the beat of the leads’ linguistic somersaults which enthral from start to finish. Anderson dazzles as he adopts the play’s minor characters, frantically racing through a cacophony of strangely familiar personalities lending Dublin Oldschool a sense of incessant momentum. Punctuating the episodes that make up Jason’s odyssey (an afterparty infiltrated by undercover Gardaí, an impromptu rave on an island, to name but two) are chance encounters with his older brother, played by an impressive Anderson.

A homeless heroin addict unseen in three years, Daniel’s rough demeanour disguises a glowing intellect. Over the course of Jason’s four day bender the pair work through their fraught relationship as it becomes apparent how little actually separates them. As in previous projects (Sarah and Steve, Heartbreak) Kirwan reveals himself as careful reader of Irish society. Its under-examined drug and party culture consumes swathes of youth, but is also something they actively shape.

The sold-out shows would suggest that large sections of young people are looking for more colourful representations of themselves and a greater understanding of their shared experience. Nevertheless, the dark side of Ireland’s habits of excess are never far from the surface. Jason, even at his most upbeat, is observably anxious. He fails to persuade Daniel and indeed himself that his own preference for ketamine and ecstasy are of any qualitative difference to sticking a needle in his arm. We learn how his seemingly more glamorous hedonism is motivated by the same sense of lacking and alienation as his brother’s less socially acceptable struggle.

Yet Kirwan is sensitive to the promise of the places, music, friendships and lifestyles that develop alongside euphoric substances. Daniel suggests a utopian impulse when he waxes lyrical about the unbridled excitement of attending mass outdoor raves, how differences between working class and middle class kids dissolved in their shared pursuit of something more than an unjust and exploitative society can offer them. Yes, such sentiments are chemically induced, but this doesn’t negate them as very real desires and aspirations. Dublin Oldschool is a tragi-comic exploration of the sometimes distorted, often creative ways these emerge.