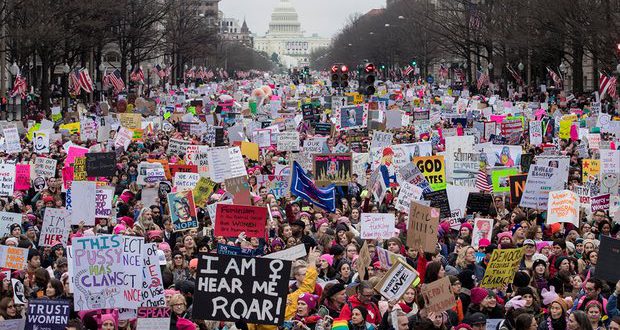 Trump’s Presidency: The resistance has started

The following article is from the current edition of “The Socialist”. It was written before last weekend’s historic women’s marches in the US, the largest in the country’s history, against the new Trump regime. It is estimated that over three million marched in the major cities US. Solidarity protests took place across the globe.

The election of Donald Trump has polarised US society and shocked people around the world, writes CONOR PAYNE. The Republicans, with their hard-right element in the ascendancy, have taken control of the Presidency, both houses of Congress and most of the state governments.

We can expect them to pursue an aggressive agenda against environmental protection, possibly resuming the construction of the Dakota Access Pipeline at Standing Rock. They intend to repeal the Affordable Care Act, taking health insurance from tens of millions, introduce huge cuts to corporation tax and launch major attacks on unions.

The Republican congress has set its sights on cutting or privatisation the historic social programmes of Social Security and Medicare. Trump has promised mass deportations, approximately 3 million in the first months of his presidency- outstripping the numbers deported over the 8 years of Obama’s presidency. An assault against women’s rights is on the agenda, in particular the cutting of all funding to Planned Parenthood.

However, Trump and the Republicans are far from invincible and can be defeated by movements of women, people of colour, LGBTQ people and the working class. Trump lost the popular vote by almost 3 million votes and has an approval rate of 37%, a historic low for an incoming president. Many of Trump’s own voters who wanted a break from the establishment will soon be disappointed as he pursues an agenda geared to the interests of the super-rich and major corporations. The Republicans themselves are divided, as shown by the ructions over the role allegedly played by Russia in assisting Trump’s election.

Trump can be defeated

A mass sentiment of opposition to Trump already exists. A huge section of US society is actually moving to the left, as indicated by the enormous response to Sanders’ campaign, and the development of social movements such as Black Lives Matter, Standing Rock and the fight for a $15 minimum wage. These forces are on a collision course with the Republicans and can win.

In 2006, a bill passed to pave the way for mass deportations was defeated by a movement of millions of undocumented immigrants, and also shifted attitudes for a time in support of immigrants’ rights. In Poland last year, the hard right government was forced to back down from a total abortion ban, after huge protests by women, including strike action, convulsed society. These are examples of the scale of struggle which will be needed.

In Kentucky, the Republicans have attempted to simultaneously introduce an abortion ban and an anti-union ‘Right to Work’ law and have been met by a mass occupation of the statehouse. Socialist Alternative, our US sister organisation, have called for mass protest at Trump’s inauguration on January 20 and A Million Women’s March has also been called in the context of the attempts of the new regime to defund Planned Parenthood. Trump and the right wing can be beaten- but a serious fight will be needed.

The failure of the Democratic Party to defeat as unpopular a candidate as Trump was an indication of their deep weakness and crisis. They are shown up as not defending the interests of working class people and this has been seen as a major reason for their loss. The calls of a section of the Democrats to now ‘give Trump a chance’ represents the exact opposite of what is needed.

However, the efforts put in by the Democratic Party establishment to defeat Sanders in the primary last year how that they are not for turning and that a new party is needed for working people and youth in the US, linked to the grassroots movements that will develop against Trump.

Trump’s election reflects the decline of the US empire and the loss of authority of its ruling class. A hallmark of his campaign was his call for increased protectionism and an end to the era of globalised free trade. This is being mirrored by other forces on the right internationally, as the world moves away from being solely dominated by US imperialism.

We are seeing increased competition between the major capitalist powers as Russia + China in particular increasingly assert themselves on the world scene. This is already reflected in conflicts around the world, including in Syria and Ukraine.

This is a dangerous development for working people around the world, threatening both increased conflict and an escalation of the race to the bottom- as seen by Trump’s plan to lower US corporation tax to 15%. We need urgently to organise to fight for a socialist world which will instead be based on international co-operation in the interests of the 99%.