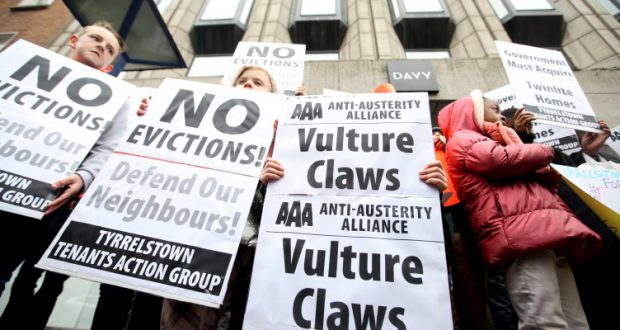 On Monday 9 January, RTÉ aired The Great Irish Sell-Off. The hour long documentary outlined broadly the activities of appropriately named vulture funds in Ireland and across many parts of the world. The documentary showed the huge value in assets that these few vulture funds hold, the massive human cost for ordinary people, and the pittance in tax that these funds pay.

Ian Kehoe, the presenter, outlined how 15 Irish subsidiaries of these vulture funds owned a collective €10.3 billion in assets, yet incredibly only pay an average of €250 a year each in taxation. The estimated losses to the state are in the region of €500 million as a result of lucrative tax breaks (which equal corporate welfare) given to these funds by successive right wing, neo-liberal governments under Fine Gael, Labour, Fianna Fáil and the Greens.

During the course of the documentary there were interviews with Ashoka Mody (former head of the IMF mission to Ireland) who stressed that the arrival of vulture funds into Ireland was the market taking its course. He argued that it was inevitable, peddling the tired myth that Irish (working class) people have lived beyond their means.

The reality is that the speculation of bankers and developers brought Ireland into dire economic straits.  These vulture funds – many of which caused the international economic crisis to begin with – are swooping in to profiteer off the back of this crisis. This comes at a great human cost as they have helped to fuel a new housing crisis in the state.

That these vulture funds can buy up huge amounts of property and then evict those living in them is no accident or oversight, it’s capitalism working as intended. The case of Tyrrelstown, where mass eviction notices were issued, is illustrative of what these funds will try to get away with if not met with resistance from ordinary people.

Similarly, a vulture fund in Limerick sought to evict the residents of an apartment complex, however they were unsuccessful in doing so when tenants organised to fight them. According to one of the city’s local TDs, Minister for Finance Michael Noonan – who invited this particular fund to come in, and met them on eight different occasions – they “provide a very good service.”

The activities of these vulture funds is at the centre of Ireland’s homelessness and housing crises, with rents increasingly rapidly and becoming unaffordable for working people. The property that they purchased at knock prices must be seized by the state and utilised to create social and affordable homes for all. More broadly we must end the logic of the private market, which has proven incapable of providing affordable homes for all.