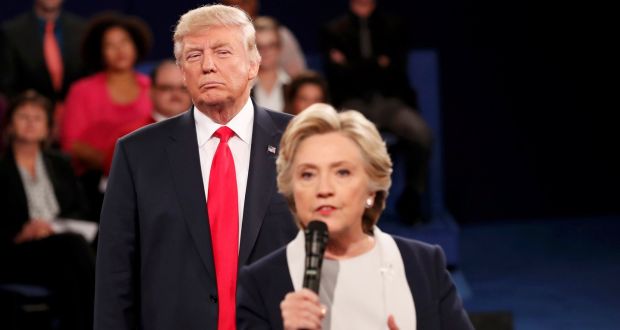 US: Deeply damaged, the two parties limp towards the finish line

The country is “slouching towards the mutual assured destruction of our political system.”

In this election between the two least popular presidential candidates in modern history, whoever wins tomorrow will enter office facing unprecedented levels of popular hostility. Hillary still holds a narrow lead in most polls. But, with the final weeks featuring a steady drip of wikileaks revelations and the surprise news of renewed FBI scrutiny of her emails, Trump’s ability to exploit the deep distrust of Clinton and the political establishment as a whole has kept his campaign afloat.

If Trump is defeated tomorrow, tens of millions of working people will breath a deep sigh of relief. Though for very different reasons, that relief will be shared by the political and corporate establishment, including much of the Republican Party leadership. While progressive working people, women and people of color fear Trump’s racism, sexism, and authoritarian agenda, opposition to the Republican nominee among the corporate establishment flows from their fear of the social revolt and political instability a Trump presidency would unleash. Already, the 2016 election has done serious damage to the legitimacy of “The Greatest Democracy in the World,” but an erratic Trump White House at the helm American capitalism would be disastrous for Wall Street and big business.

The close race is squeezing support for third party candidates, including both the Libertarians’ Gary Johnson and the Green Party’s Jill Stein, who Socialist Alternative has endorsed. Tens of millions of progressive workers and young people who completely oppose Clinton’s corporate agenda are nonetheless voting for the “lesser evil” Democrat to block Trump. Yet hundreds of thousands more voters will back Stein, remaining firm in their support for building an independent left alternative. These votes will be a down payment on the key project facing working people in the years ahead: the establishment of a viable, broad new party of the 99%.

For most of U.S. history, presidential elections have served to strengthen the legitimacy of government, providing the aura of a democratic mandate even as big business continued to dominate American politics. The opposite has been true of the 2016 elections. Over the past year, beginning with the bloody primary battles up through the “total war” campaign between Clinton and Trump, this election has deeply eroded popular confidence in American democracy and both major parties.

In the final weeks of the election, Trump has sharpened his attacks on “crooked Hillary” and repeatedly  warned that the election is being rigged by Clinton’s media and establishment allies. The stunning decision by FBI Director Comey to announce his renewed scrutiny of Clinton’s emails unleashed a fierce debate that is both reinforcing the deep popular cynicism toward Clinton as well as distrust for the FBI’s supposed political “neutrality.” Facing extreme pressure, Comey announced that Clinton has been again cleared of any wrongdoing, but that doesn’t undo the damage done.

While socialists have long pointed out the hidden political role of all governing institutions under capitalism – particularly the courts, police, and the various “security” forces – the myth of their non-political role and neutrality in elections is an important prop for the ruling class to maintain the legitimacy of their system.

Alarm is growing among the more far-sighted sections of the ruling class. The New York Times quoted former New Hampshire Senator Gregg Judd (R) who spelled out the concern: “What we’re seeing in this election, with Trump saying the election and everything else is rigged and now this attack by Hillary and her people on the F.B.I., is basically an attack on our form of a constitutional government. They’re undermining the core elements of what gives our government credibility.” AndWilliam Cohen, former Secretary of Defense under Bill Clinton, ominously warned that the U.S. is “slouching towards the mutual assured destruction of our political system” (10/31/16).

The splits and weakness of both corporate parties undermines their ability to carry out big business’s political agenda. Reflecting this fear within the ruling establishment, top Obama advisor David Axelrod warned against further politicizing the FBI’s investigations of Clinton: “Everything now get’s weaponized. … One more institution gets dragged into this partisan morass. In the short term, it’s two candidates trying to win an election, but in the long term someone has to govern, and it becomes more difficult when everything is seen as an extension of politics” (NY Times, 10/31/2016).

In the final analysis, the deep dysfunction and partisan infighting within the political establishment is a reflection of the growing class divide and the inability of crisis-ridden U.S. capitalism to take society forward. Popular anger and distrust at the system is undermining the leadership of both major parties and providing opportunities to challenge to their domination on both the right and the left.

Over six in 10 American don’t feel represented by either major party, and a stunning 74% believe the country is off on the wrong track, compared to just 57% before the 2012 presidential election, according to  the annual “American Values Survey” by PRRI (TheGuardian.com, 10/25/16).

Other polls consistently show a majority of voters don’t trust either Clinton or Trump, but this is as much a reflection of wider distrust for the political system as it is about the dishonest record of both candidates. Despite liberal dismissals of Trump’s allegations of the election being rigged against him, he gets a wide echo shown by only 43% of people saying they have a great deal of confidence their vote will be counted accurately, (PRRI).

Trump’s specific allegations of mass voter fraud in urban areas are completely baseless and his call on supporters to monitor urban voting places amounts to racist intimidation and voter suppression. In fact, the poll also showed there is somewhat more concern over voter suppression than voter fraud. Voter suppression, heavily practiced by the Republican Party is in fact the main form of direct “vote rigging” in national elections. However, the overall picture Trump paints of the whole system being rigged in favor of the establishment appears to have helped him edge back in the polls after his sexual assault tape scandal.

Commenting on the same poll, the New York Times added that “most say their ballot will not matter anyway because the political process is so dominated by corporate interests” (10/25/16).

Progressive backers of Clinton only undermine themselves by parroting Democratic Party talking points expressing “shock” that anyone would dare question the hallowed sanctity of America’s democratic institutions. Trump himself has been quick to remind Sanders supporters how the corporate media and the DNC used every dishonest trick available to derail Bernie’s “political revolution against the billionaire class” in the Democratic primaries.

If Clinton wins the election, the shadow of corporate media bias and the skewed primary process will undermine her legitimacy even among millions who will, noses held, cast a vote for her to block Trump. But in the long run, her real problem will be less about various specific allegations of wrongdoing around the election, and more about the corrupting influence of Wall Street and big business guiding Clinton administration policies. While Bernie Sanders transformed himself after the primary into one of Clinton’s key backers, already in the last weeks of the campaign, he has sent several shots across her bow, vowing to fight if Clinton appoints Wall Street insiders to regulatory agencies or tries to push through the Trans Pacific Partnership.

The Battle for the GOP

What’s also clear is that the far right forces around Trump are not going away even if he loses tomorrow. “The biggest beneficiary [of Trump’s campaign] may well be the so-called alt-right, the once obscure and now ascendant white nationalist movement with close ties to Breitbart News, the website operated by Mr. Trump’s campaign manager, Stephen K. Bannon” (New York Times, 11/7/16). Trump, Breitbart, and other far right groupings could continue to wage a serious fight for control of the Republican Party, deeply destabilizing a key pillar of big business’s control over society.

An important new report by Bloomberg Businessweek (10/27/16), which was given special access “inside the Trump Bunker,” reports that while they remain publicly optimistic about winning the White House, Trump’s inner circle is actively preparing to build their influence post-election under a Clinton presidency. Notably, Trump has effectively raided the RNC’s data system, which the party invested millions to build over the past four years, and amassed a huge list of over 13 million donors and voters.

Businessweek reports: “The final ignominy for a Republican Party brought low by Trump is that its own digital efforts may undermine its future… If the election results cause the party to fracture, Trump will be better positioned than the RNC to reach this mass of voters because he’ll own the list himself.”

Steven Bannon, on leave from Breitbart to act Trump campaign chairman, explained: “Trump’s a builder. And what he’s built is the underlying apparatus for a political movement that’s going to propel us to victory on Nov. 8 and dominate Republican politics after that.” Trump may not win the presidency, but the battle for the Republican Party promises to be long and nasty.

The threat of right populism underscores the urgent need for the left to build a powerful anti-establishment alternative in order to undercut support for the politics of hatred and division, and to offer genuine solutions for working class people. If our unions and social movements remain tied to the Democratic Party and compromised by association with Clinton’s pro-corporate, pro-war agenda, right-wing forces will be able to continue exploiting the anti-establishment anger among big sections of the working class.

Unfortunately, Bernie Sanders did not run through the general election as an independent, asSocialist Alternative and hundreds of thousands of his supporters urged. His decision to run inside the Democratic Party and respect the rigged results of the primary meant that, in the general election, no left alternative was on offer, opening huge space for Trump to expand his base of support. As we warned, Clinton’s establishment campaign was completely incapable of tapping into the widespread discontent and desire for change. That is why Socialist Alternative has campaigned for Jill Stein as the strongest independent left candidate.

Clinton’s Super PAC has spent millions to cut across Stein and third party support. Stein has been subjected to an endless stream of one-sided attacks, with Clinton surrogates in the media seizing quotes out of context to undermine her credibility. They have raised the specter of Ralph Nader’s2000 election campaign and the myth that he “spoiled” the election for the Democrats and handed victory to Bush.

In reality, these attacks reveal the weakness of the Democratic Party and Clinton, and their incapacity to motivate real enthusiasm behind their campaign. Instead, the Democratic Party has been forced to rely more than ever on purely negative attack campaigns against any challenge to their corporate agenda. Stein’s vote may well be squeezed, but beneath the surface there is growing support for building independent left politics. In the months and years ahead, as the crises and divisions within both big business parties deepen, the idea of building a new party of the 99% is set to gain momentum.