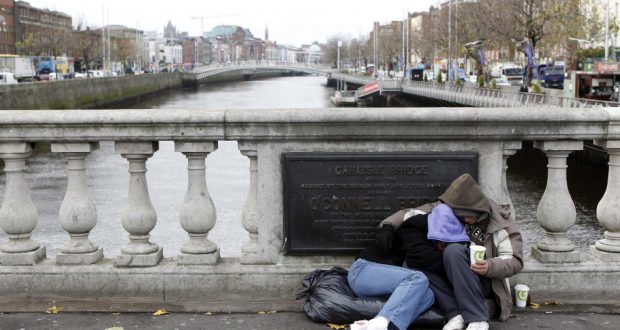 Despite government promises pre- and post-election, the scale of the housing crisis has only become sharper in the last few months. The most recent official figures show that a record total of 6,709 people are now homeless nationwide, which means about 1,173 families, and a shocking 2,426 children.

In July of this year, the government published Rebuilding Ireland – Action Plan for Housing and Homelessness a document that was supposed to provide a clear guide to their plans to expedite the delivery of social housing and improve the rental market among other things. Yet, six months later we can see that they are nowhere near their targets and more and more families are faced with homelessness this winter.

No investment in council homes

One of their targets was that by mid-2017 emergency accommodation (hostels, B&Bs, hotels) for families would only be used in extreme circumstances. Yet, the situation has clearly exacerbated, in 2015 on average 60 families per month were becoming homeless, in 2016 however this shot up to 81 per month, according to figures by Focus Ireland. Including prefabs –which of course do not constitute a long-term solution- in the first six months of the year only 117 local authority homes were built.

The government seems more determined to drop people off their housing lists (through housing needs assessment) or putting them on HAP (Housing Assistance Payments) rather than building real houses. HAP, similar to other housing schemes introduced by the government does not seem to be working either as most landlords wouldn’t rent their properties within its limits. In September in Limerick city, for instance, there were 35 properties available to rent none of which within HAP limits. This is linked to the massive increase in rents we have seen in the last year which are now on average 9.3% higher than during the peak of 2008.

The sad reality remains that over 2,400 children will spend Christmas in emergency accommodation, or crammed in overcrowded houses with their extended families, or couch surfing or in cars. The government has provided no serious solutions and seems determined to still heavily rely on the private sector, trying to create incentives for developers and big landlords who are the biggest part of the problem, not the solution.

There needs to be a break with market based solutions and an end to profiteering on rents, putting people’s needs to the forefront of their plans instead of using this crippling housing crisis to help developers and landlords increase their profits.