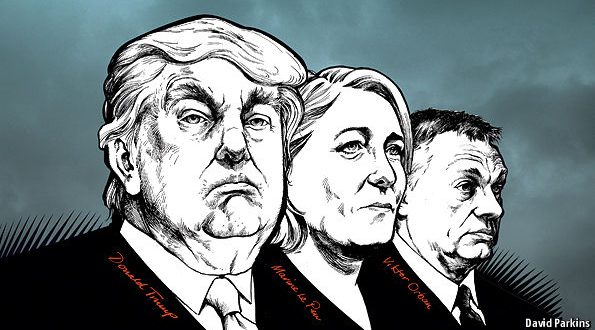 After decades of neo-liberalism… The political “centre” cannot hold

Over 35 years ago, Margaret Thatcher and Ronald Reagan took up the ideas of neo-libearlism and used them as the foundation of what they saw as a new era for capitalism.

“The market would discover a natural hierarchy of winners and losers, creating a more efficient system than could ever be devised through planning or by design. Anything that impeded this process, such as significant tax, regulation, trade union activity or state provision, was counter-productive. Unrestricted entrepreneurs would create the wealth that would trickle down to everyone.” – George Monbiot (The Guardian, 14 November 2016)

Three decades later Trump is elected, Marine Le Pen has a chance of winning the French presidency and far-right Freedom Party (FPÖ) candidate Norbert Hofer might become the president of Austria. From the left we saw the momentous movement around Bernie Sanders in the US this year and Jeremy Corbyn being propelled to the leadership of the Labour Party in Britain in September 2015.

Politics has been fundamentally shaken up since the global financial crisis and the failure of neo-liberalism is at the heart of these dramatic changes.

Neo-liberalism opened up the way for the development of globalisation a process by which the multinationals aided by their political kin have driven a race to the bottom in wages and conditions of the working class resulting in an unprecedented transfer of wealth from the 99% to the 1% ruling elite.

In this maelstrom of attacks on workers’ rights, the welfare state and the social wage the leaders of social democracy such as Tony Blair and the trade unions abandoned even the pretence of aspiring to socialism and breaking with the capitalist profit system – taking the next logical step and adapted to this new “reality” by embracing neo-liberalism. In turn they joined with the parties of the right in making working class and middle class people pay for the ongoing crisis in capitalism.

The destruction of industry in whole regions of the UK and the US has devastated millions of lives. The failure of Thatcherism, Reaganism and Blairism has resulted in widespread alienation amongst the working class from the political establishment and created a vacuum into which right-wing populism as grown.

As well as attacking and scapegoating migrants and seeking to stir up racism, Trump, Marine LePen, and the Little Englanders of UKIP have been able to gain support among working class people by using populist language of opposing de-industrialisation and the other effects of neo-liberalism.

We are on the brink of a new race to the bottom. Trump has promised to cut US corporation tax from 35 to 15% in order to attract back the jobs which have gone to Mexico, Europe and the Far-East. Theresa May has threated to cut the UK tax rate to 10% if Britain doesn’t get access to the EU single market.

Tax cuts for the 1% of this magnitude will result in further cuts in public spending and a further driving down of wages and conditions for working class people. The new right wing populists such as Trump and May are in reality ultra neo-liberalists who will disappoint their millions of voters.

Real potential for the Left

The alienation of working class people from politics is highlighted by the growing numbers who don’t vote. Millions who believe that there is no political party that will meet the needs of their families. The growth in support for left figures such as Corbyn and Sanders show the potential that exists to build new parties of the working class that can oppose austerity and the racism being fermented by the likes of Trump.

The last forty years has shown clearly that capitalism is a failed system. We need to build new political parties committed to getting rid of this failed system and replacing it with a democratic socialist society that can meet the real needs of the 99%.