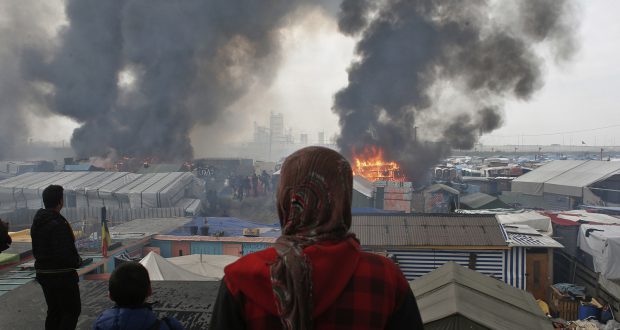 People stand on a hill as smoke and flames rise from amidst the tents, after fires were started in the makeshift migrant camp known as "the jungle" near Calais, northern France, Wednesday, Oct. 26, 2016. Firefighters have doused several dozen fires set by migrants as they left the makeshift camp where they have been living near the northern French city of Calais. (AP Photo/Thibault Camus)

Capitalism: A future of horror & injustice – Join the socialists

2016 has been a tumultuous year. Every day we have been reminded of the horrors and injustices that exist on our planet.

In April, the Panama papers lifted the lid of the web of tax fraud that the super-rich and corporations internationally are engaged in. Closer to home the tax dodging by highly profitable multinationals came to public attention in September, with the revelation that Apple owed €13 billion plus interest to the Irish state.

Meanwhile, the yawning and obscene wealth gap between the super-rich and the rest of humanity is growing at an ever greater speed. A report commissioned by Oxfam in January revealed that the richest 1% now have amassed a greater sum of wealth than the 99% of our planet.

It has become even more so apparent this year that there is a lack of any meaningful economic recovery for working class people. Rising rents, lack of affordable homes, and low paid temporary jobs are becoming increasingly the norm of life for a growing number today in Ireland.

The government, if it wished could take the €13 billion owed to it by Apple and build 130,000 council homes, consequently clearing the housing waiting list. But of course they won’t! They represent, support and defend the brutal logic of the capitalist system we live under, a system based upon the blind and thoroughly ruthless pursuit of private profit by the super-rich of our society.

On a global scale the rule of the 1% is piling misery upon misery. October marked the 15th anniversary of the commencement of the “war on terror” which spurned a decade and a half of wars for oil, power and profit in the Middle East, North Africa and Afghanistan.

The refugee crisis is a direct, shameful and tragic consequence of these wars. As of the end of October the UNHCR published the grim and horrendous statistic that 3,740 refugees had lost their lives crossing the Mediterranean in 2016.

Now we have Donald Trump, a dangerous and racist billionaire bigot as President of the world’s most powerful country. This has shocked and horrified young people, women, LGBTQ people and working class people generally. As explained elsewhere in this paper, Trump’s victory was far from inevitable, it was the absence of a strong left-wing alternative.

October 15 marked the 50th anniversary of the founding of the Black Panther Party in the US, a courageous black liberation group whose anti-racist and anti-capitalist politics stands in stark contrast to that of the Trump’s, or indeed Hillary Clinton’s of this world. What propelled its founding was the understanding that, as articulated by one of its leaders, Bobby Seale, “we are not outnumbered, we are only out organised”. This has never been truer.

For a socialist future

The tiny big business oligarchy that dominate our lives are organised. They control of vast swathes of the media, all the political parties of the establishment defend their interests and the Jobstown trial has illustrated that the forces of the state do likewise. But they can be defeated.

The suspension of the water charges after a 74% boycott of the last bill and the gains made by Luas and Bus drivers after taking industrial action provided a glimpse of the power we have when we organise.

We need to go a step further and organise around the socialist ideas of James Connolly and Jim Larkin. This means organising to fight against the rule of capitalism in our world. It means organising to popularise the idea of a democratic socialist society based on matching society’s resources with real human needs.

Join the Socialist Party today and help to organise for fundamental change.