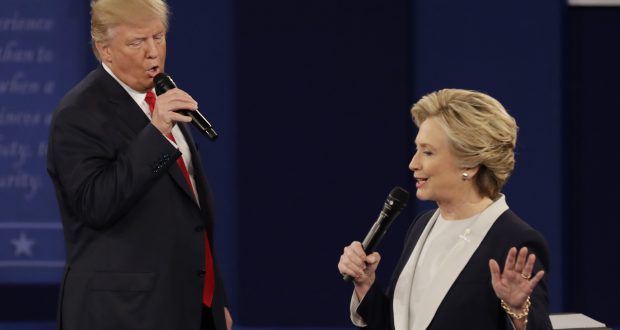 US Presidential election & the need for a party of the 99%

The US Presidential election has taken a dramatic twist with the coming to light of a secret recording of Donald Trump grotesquely bragging of his sexual assaults of various women.  As vile as these comments are, their content should not come as a major surprise to those who have listened to the litany of racist, Islamaphobic and sexist comments he has spewed out over the last year.

It would appear that Trump’s campaign has been fatally undermined. Senior Republicans such as John McCain, Arnold Schwartzenegger and Paul Ryan (current Speaker of the U.S. House of Representatives) have withdrawn their support. Like much of the Republican Party establishment, they were opposed to Trump’s candidacy in the first place.

In the week prior to the release of the recordings, opinion polls showed him falling behind Hilary Clinton by four or five percentage points.  This trend is likely to continue, particularly if more recordings are released that further cast a light on his despicable sexist and racist attitudes. It has been reported by a number of media outlets that there is footage of him using the N-word on the programme “The Apprentice”.

The Clinton campaign will undoubtedly have been strengthened by this episode and the recordings of Trump could not have come at a more ideal time. They coincide with the leaking of speeches she made to Wall Street bankers that further illustrate how she is the prime candidate of the 1%.

In April 2013, in a speech for Morgan Stanley, Clinton praised the Simpsons-Bowles deficit reduction plan which would lower corporation tax and at that same raise the Social Security age.  When addressing representatives of Goldman Sachs she argued that bankers were the best people to engage in (self) financial regulation, saying that: “people that know the industry better than anybody are the people who work in the industry.”

Clinton was paid as much as $225,000 for such speeches and more generally it is estimated that she has amassed a whopping $22 million by going on the speaking circuit after stepping down as Secretary of State in 2012.

During this campaign Clinton’s support has rested largely on the simple fact that she is not Donald Trump. She is widely despised by many and only 11% of the electorate trust her.  Despite that fact that Trump was decisively on the back foot in the second Presidential debate, following the release of his taped comments, only 47% believed that she had won the debate, as opposed to 42% for Trump.

The current election cycle in the US has exposed the gaping vacuum in US politics and the need for a party that stands in the interests of working-class people. Clinton and Trump’s aggregate approval ratings stand at a dismal 41% and 36% respectively, the lowest rates since such polling began thirty years ago. Interestingly, this rate for Bernie Sanders stands considerably higher at 53.4% illustrating how the message of his campaign of the need for a “political revolution against the billionaire class” still resonates with many and the potential that existed had he stood independently of the Democrats.

Unfortunately Sanders chose to endorse Clinton, a clear representative of the “billionaire class”. Socialist Alternative, the sister organisation of the Socialist Party in the US, argued against this and are supporting  Jill Stein, the anti-corporate left candidate of the Green Party. Stein’s candidacy is an important marker and can tap into the radicalisation that is taking place within the US, particularly amongst young people.

What’s clear is that if Clinton is elected President she will not enjoy any honeymoon period given the levels of distrust that exists towards her.  The conditions that US capitalism and its political representatives are creating in the form of economic inequality, growing poverty and racism are laying the basis for further radicalisation, as we have witnessed with the emergence of the Occupy and Black Lives Matter movement in recent years. In this context the development of a party of the 99% can become a material reality.

The role of the working class in fighting racism