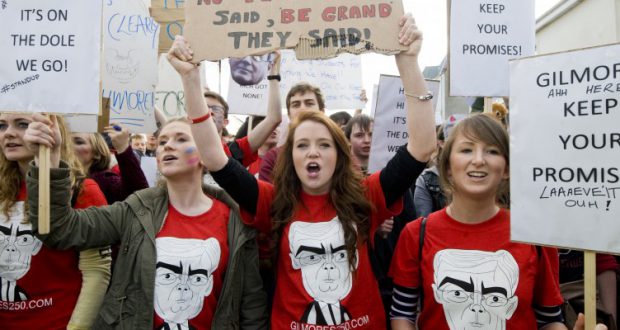 Invest in free education: No loan schemes, no fees!

Since 2008, the Irish third level education system has been greatly suffering, with cuts to university funding approximating to a cumulative €600 million over the years of recession and austerity. As a result of this, students were forced to foot the bill with the average annual registration fees growing to €3000 per annum, and student grants offering a more limited form of funding.

However, our education system is evidently still suffering from austerity measures as all Irish universities drop in the QS world university rankings in 2016. Now, due to lack of resources and facilities in our universities our quality of education is at a ‘crisis point’ according to the Irish Times.

This year, the Fine Gael minority government, supported by Fianna Fáil, have proposed to introduce a loan scheme for students, based on the current Australian loan scheme. Such a scheme would mean graduates would be forced to start paying back loans which could amount to €20,000 once their annual income reaches just €26,000 a year. If the graduate were to pay €100 a month, which would be no easy task when including the cost of living, the graduate would be repaying their loans for over 16 years. Thisalso does not account for when a student wishes to continue their education to Masters and PhD levels.

A report by the Irish Independent states that ‘A Future Finance’ company will be formed to set up loans by 2017. Their chief executive, Brian Norton, reportedly stated that once they receive Central Bank authorisation, “The work for us is making sure we’re extending the right kind of help to the right kind of people”.

It is clear that in countries such as the US, where loans are the only source of student support, other than the fiercely limited scholarships, graduate poverty is a common occurrence. In order to avoid this poverty, many people avoid university altogether. However, in a system where one needs an undergraduate degree to compete for most jobs, avoiding university can harshly limit one’s employment opportunities, and thus, keeps many workers in low-paid and unrewarding jobs.

It is clear that in capitalist societies education is seen as a product to be bought rather than a right. However, if profitable companies and the super-rich were progressively taxed third level education would be easily funded, and adequate grants would be given to those who need them.

The USI (Union of Students in Ireland) will hold a national demonstration on Wednesday the 19th of October to push for more state funding of universities and to denounce the proposal of a student loan scheme.