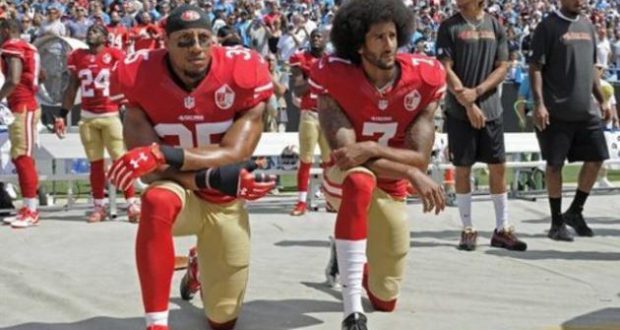 When Colin Kaepernick began his protest against racial injustice by kneeling during the national anthem at NFL football games it is unlikely he realized the scale of the impact it would have. Already, this protest has spread like wildfire through the NFL, high school, and college athletics and launched a new wave of discussion around Black Lives Matter in society.

From the start, Kaepernick has eloquently defended his protest, explaining that by kneeling during the national anthem he is not disrespecting the flag or the military but is trying to bring attention to the very real problem of extrajudicial killings of young black men and women. He has succeeded and should be commended for his bold stand.

Sales of Kaepernick’s jersey have skyrocketed and his stand has done wonders for his popularity, despite right-wing efforts to demonize him. Overall, the right has singularly failed to make headway on this issue reflecting the broad shift to the left that has taken place in society over the past period. Recent polls for example show growing support for Black Lives Matter among young white Americans.

Many military veterans have come out in support of Kaepernick  and there have been supportive commentators in the normally conservative sports news media. Even president Obama came out to support at least Kaepernick’s right to protest.

Athletes and Past Struggles

There is a long and proud history of athletes using their platform to fight against injustice. At certain key points, athletes have been able to add to ongoing movements and play a larger than life role in broadening debate and discussion in society. In 1967, Muhammad Ali famously refused induction into the Army and stated, “I ain’t got no quarrel with them Viet Cong.” Sprinters Tommie Smith and John Carlos raised their fists in the air on the medal stand of the 1968 Summer Olympics as the Star Spangled Banner played in order to protest against racial injustice in the United States.  The actions of Ali, Smith, Carlos and other athletes of the time were both inspired by mass movements  and were an inspiration to them.

Less known are the athletes who took stands in the absence of mass movements. Craig Hodges was unofficially banned from the NBA for speaking out on economic and political issues affecting the black community. The same happened to basketball players Mahmoud Abdul-Rauf and Toni Smith-Thompson who both refused to stand for the national anthem because of America’s history of oppression in 1996 and 2003 respectively.

Colin Kaepernick and those who have joined him in taking a knee clearly have been inspired by the ongoing struggle around Black Lives Matter. In turn, they are putting the issue of police brutality against black men and women front and center in a sports world that often tells athletes to simply “shut up and play.” For their protests to have a lasting impact, the movement for Black Lives has to continue to grow. Kaepernick and other athletes can use their platform to continue to draw attention to injustice; but as Kaepernick has said, he can’t “kneel forever.” He has pledged to donate his jersey sale proceeds as well as a $1 million to organizations that are working in the community.
Build Movements

It is mass movements that change society, and athletes such as Kaepernick can help build fighting movements with their public protest and by encouraging actions in the streets, joining in marching, and protesting. Seeing athletic heroes make political statements is contributing directly to the radicalization of  a new generation. Already there are middle school students refusing to say the pledge of allegiance. This is an indication of how protest and struggle could grow in scale in the next period.

Kaepernick’s protest is the latest in a series of athletes participating in the Black Lives Matter movement. Most notable was the strike of the Mizzou football players last year in solidarity with racial justice activism on their campus (read Socialist Alternative coverage here). Football is a multibillion dollar industry constantly in the public view and players have the ability to shut down the NFL and NCAA and capture the public eye: a massive platform that can be used to build movements.

As of this writing, the potential for impact of this protest is immense, but movements are not built without organizing and demands to unite around. The Movement for Black Lives published a list of demands that is an important step forward. The victorious #BlockTheBunker fight in Seattle, against the attempt to spend $160 million dollars of public money on a totally unnecessary police precinct headquarters in which socialist city councilmember Kshama Sawant played a key role, shows what is possible. Socialist Alternative (sister organisation of the Socialist Party in the US) backs Kaepernick and all the athletes in their protest.