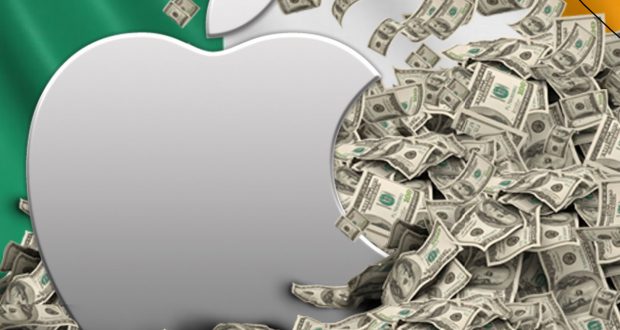 The spectacle of the Irish government appealing the ruling of the European Commission (EC) that Apple should pay €13 billion in unpaid taxes to the state is a shameful one. It is a stark reminder that they are the craven servants of big business in this country.

They are siding with a company that has cash reserves of €200 billion, and with Irish governments’ assistance, is engaging in massive tax dodging. Government minister, Michael Noonan, sought to disingenuously claim that even if this money were recuperated by the state it could only be used to pay down Ireland’s debt, a largely odious one created by the property crash of 2008-2009.

It now seems from the EC statements that this is not true. Regardless, the €13 billion windfall should be used for investment to meet the real needs of working class people, not the bondholders.

The European Commission is no friend of working class people; it has been a central component of the Troika that have foisted vicious austerity programme on the working class on Greece, Ireland, Spain and Portugal. When doing so, the Irish government obediently implemented and supported these programmes.

In July, the government used a ruling by the EC demanding the imposition of water charges to argue why they would inevitably have to be re-imposed. The obvious contrast between such statements and their scramble to ensure that Apple does not pay the taxes it owes, should be lost on no one.

This hypocrisy has been mirrored in the big business media. The day following the EC’s ruling a headline in the Irish Independent screamed “Ireland must stand up the faceless EU bullies”. This was the very same paper that consistently vilified public sector workers, along with the anti-household tax and water charges campaigns, while cheer-leading the Troika’s inspired austerity programme, telling us they were all but inevitable.

The Irish Times (Tuesday, 30 August) argued that it would be “damaging for the state” even if Apple were forced to pay a sum in the low billions (the figure of €13 billion was then yet unknown). They are clearly contemptuous of the idea that this money could be used to fund public investment and reflect a fear on the part of the ruling class that Ireland’s image as a tax haven for big business will be damaged.

This is why successive governments have sought to attract multinationals with sweetheart deals, such as the one given by Revenue to Apple in 2007 or with a pitifully low headline tax rate of 12.5% (the real effective rate is 8.3%). The degree to which this low tax model has developed the Irish economy has been exaggerated; only one-sixth of the workforce is employed directly or indirectly through the multinational sector. The bitter experience of Dell in Limerick in 2009, when 3,000 workers were let go so the company could move its operations to Poland with its lower paid workforce, illustrate how such jobs will be destroyed in the interests of profit.

The €13 billion owed by Apple must be paid up straight away. All the tax breaks and loopholes offered to big business in Ireland must be brought to end. Corporation tax must be drastically raised and the tax of the profits on big business, which is ultimately created through the labour of working class people, must be ploughed into building homes, investing in public services and infrastructure programme, such as the development of renewable energy.

If we are to develop a viable manufacturing base within the economy we must end the reliance of the private sector which has failed to do so. The key sectors of the economy must be brought into democratic public ownership and on the basis of democratic plan of the economy their resources must be productively utilised for the benefit for everyone in society, not for a hand full of billionaire CEOs.

How the €13 billion could be used

It could build twenty new hospitals throughout the state.

Provide free education for the next twenty years from primary to tertiary level resulting in the abolition of third level fees and costs associated with primary and secondary level such as books, transport etc.

By investing €13 billion in transport we could provide free bus service in all our major cities for the next 270 years.