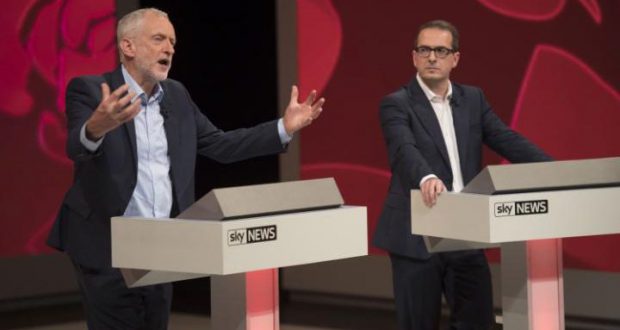 An all-out battle is underway for the leadership of the British Labour Party. The challenge to left leader Jeremy Corbyn comes from Owen Smith, who enjoys the support of Blairite MPs and the capitalist establishment.

The challenge is an attempt at a coup – it has been accompanied by repressive measures. One hundred and thirty thousand members who joined after 12 January were banned from voting by the national executive.

Branches have been banned from meeting until after the vote on 24 September. Several pro-Corbyn constituency parties have been shut down on spurious grounds. However, a powerful social backlash has been unleashed against the coup. 183,000 people applied to join paying £25 within a 24-hour deadline, most to defend Corbyn.

Tens of thousands of these applications have been ruled out by party officials, often using the excuse that applicants expressed support for other (often times left) parties. One woman was denied membership seemingly for posting “I f—– love the Foo Fighters” on Facebook. Bakers Union General Secretary Ronnie Draper was banned despite Lord Sainsbury being allowed to vote – Sainsbury made a £2m donation to the Liberal Democrats this year. Shadow Chancellor John McDonnell has described the measures as a “rigged purge”.

Despite this, 234 out of 275 constituency parties have nominated Corbyn. A poll of those entitled to vote showed Corbyn on 62pc when undecideds were excluded (from 59.5pc in last year’s leadership vote).

There are now, in effect, two parties within one. A Corbyn victory will not be accepted by the open supporters of capitalism within Labour’s ranks.

There is speculation that up to 150 MPs could split, establish a new party and claim £4 million in allowances as the main opposition grouping.

A second possibility is that the Blairites remain within Labour to trip up Corbyn at every opportunity in the hope that the Tories win the next General Election and that defeat unseats Corbyn.

A third scenario might be for a combination of the two with both a split and a “fifth column” within Labour working towards common goals.

Corbyn and the Left need to be clear on this score and ditch illusions that a united challenge to the Tories and austerity can be built with these traitors.

This can be done by embracing the policy of mandatory reselection and not allowing MPs who refuse to support democratically-agreed anti austerity socialist policies to represent Labour.

It can also be done by actively building a mass membership, including all socialists driven out during the Blair era.

Part and parcel of this enterprise should be the opening up of a debate on how a Labour left government can decisively improve the lives of the 99%.

Corbyn has advanced positive proposals in this regard – a £10 minimum wage; an end to NHS privatisation; abolition of tuition fees; building 500,000 new Council houses; rent controls; renationalisation of the railways etc.

However, just as a partial revolution is not sufficient within the Labour Party, nor is it within capitalist society. While the profiteers control the banks, major industry, the media and the state machine, these progressive measures will come under attack – as was seen in Greece with the Syriza government.

What will be needed is a decisive break with the system of capitalism and the implementation of bold socialist policies that take the key sectors of the economy out of the hands of the 1%. On only on this basis can a decent standard of living be provided for the majority of society.

A decisive victory for Corbyn on Sept 24 is an important first step along the road to such a reality.