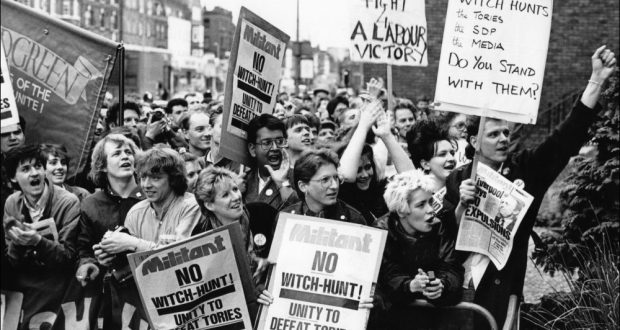 The campaign against Jeremy Corbyn’s leadership of the British Labour Party has led to new attacks from the media and the Blairites on ‘Trotskyism” and the Militant, forerunners of the Socialist Party. Deputy Leader Tom Watson produced a ‘dossier’ on Trotskyist infiltration of the party, claiming that Labour was being taken over by “Trotsky entryists” who are “twisting the arms” of young members to support Corbyn!

The press has been full of scare stories, repeating and embellishing these allegations. The Telegraph went as far as to complain that Corbyn (in 1988!) supported a parliamentary motion calling for the complete rehabilitation of Trotsky and “all those innocent people murdered by the Stalin regime”.

Obviously, these allegations are designed to disappear the reality that hundreds of thousands of working class and, particularly, young people have joined the Labour Party to defend Corbyn’s leadership. This is not a result of manipulation by the ‘hard left’ but of the mass support which exists for left, anti-austerity politics and a party of that represents the interests of working class people.

The reality is that as a result of this influx, the Blairites have lost their own ability to control and manipulate what happens in the Labour Party, and are trying now to re-establish that control, including by purging as many members as possible. But the Blairites’ fear of Trotskyism is real. It is significant that the current coup against Corbyn has seen the re-publication of Michael Crick’s 1980s witch-hunting book ”Militant”. In the 1980s, a key step in the Blairite takeover of the Labour Party was the expulsion of Militant supporters, who stood unapologetically for genuine socialist ideas within the Labour Party and who advocated a fighting approach to taking on Thatcher.

Corbyn has correctly dismissed the allegations of Tom Watson as nonsense. He should go further and advocate that Labour to be organised on a federal basis so that different socialist groups, including the Socialist Party, can be allowed to openly organise and put forward their ideas for democratic debate and discussion.

Leon Trotsky was the outstanding co-leader of the Russian Revolution, where working people for the first time in history on a national scale took power and wealth from the hands of the super-rich minority and established a society based on democratic control of wealth and resources. He went on to fight implacably against the rise of Stalinism, which represented the defeat of workers’ democracy and the establishment of a bureaucratic dictatorship in Russia. For this, he was exiled and ultimately assassinated on the orders of the Stalinist regime.

The ideas of Trotskyism are in reality the ideas of workers’ democracy and socialism. As more and more people are looking for an alternative to capitalist austerity, those ideas are more relevant than ever and will be investigated by increasing numbers of those who are looking for a way forward in taking on the Blairites and the Tories. This is what the right-wing and the capitalist press are really afraid of.

Militant were the forerunners of the Socialist Party, both in Ireland and in Britain. Within the Labour Party, they stood for a socialist programme that meant a decisive break with capitalism and a fighting approach that meant the mobilisation of working class power against the Thatcher regime. Their stance resulted in a witch-hunt by the right-wing and the expulsion of Militant’s supporters.

Militant in Britain won huge support for its ideas. From 1983 to 1987 the Liverpool Labour City Council- led by Militant supporters- refused to implement austerity, successfully took on Thatcher and created thousands of jobs and homes in Liverpool.

They achieved this by mobilising tens of thousands of working class people and succeeded in increasing the Labour vote where elsewhere the Tories were winning. Militant also led the mass non-payment movement against the hated poll tax which brought down both the tax and ultimately Thatcher herself. Militant’s successes against the Tories hold important lessons for Corbyn and the Left today.