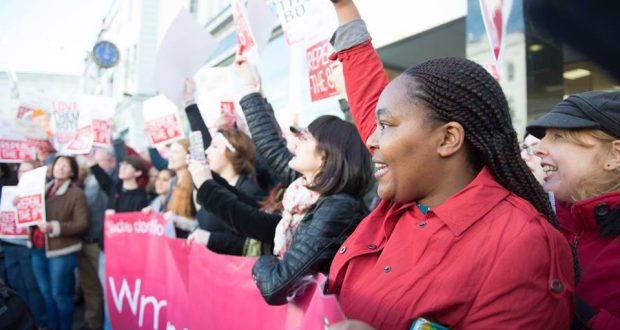 A referendum is a real citizens’ assembly

Irish politics this summer has been dominated by the widespread and ever more vocal outcry for Repeal of the 8th Amendment. No matter how much the political establishment tries to hide away from the issue, a powerful campaign for repeal has exploded on to the scene and will not just ebb away.

A youthful movement from below, women in Ireland standing up for their rights- it is the last thing this government wanted. They had hoped to “park” this proverbial hot potato in a “Citizens’ Assembly”, so they could claim they were doing something without actually changing anything.

100 randomly picked people get to discuss the issue in a Citizens’ Assembly and then recommend under what circumstances women should be trusted with their own bodies. Whether to have a child or not should be a private choice, not a public debate. Unfortunately, because of the 8th Amendment being wedged into the Constitution back in 1983, we have to make abortion rights a public debate. But what we need is a referendum, in which everyone aged 18 or over in Ireland will get to have a say on the issue.
The very concept of the Citizens’ Assembly is a cop out. Is this not why we elect TDs – to legislate? The Dail should take its responsibility and finally give this generation a say by calling a Referendum to Repeal the 8th now. It is very clear the government is trying to avoid this – and they will use the Citizens’ Assembly if it suits. But that is all they intend to do with it.
Already various government sources have made it very clear that what they “expect” a Citizens’ Assembly to suggest is a referendum to preface extremely restrictive legislation, which would only allow abortion in the case of fatal foetal abnormality (FFA), rape and risk to the life of the mother. While this would be an assist to the 76 tragic cases of women who have to deal with a FFA diagnosis every year – and let’s be clear, it is absolutely outrageous how women in that situation are made to suffer in this State – it will not be any step forward for the 35 women every week who access abortion for other reasons.
Even worse is the potential that the Citizens’ Assembly will advocate a referendum that only amends or replaces the 8th to allow for choice in the case of FFA potentially setting back the movement for a woman’s right to choose for years.

What we need now is a leadership that is clear and honest about what is objectively necessary. We know history is our side on this and that a repeal referendum is now possible in the forthcoming period. That puts an onus on us to reach out to as many people as possible to convince them of the need to support a pro-choice position.
The best way to do that is by having a programme that bases itself on a firm pro-choice position – linking the availability of abortion with the need to separate church and state so the procedure can be carried out in the public health system, so comprehensive sex education can be provided in schools, but also investment in child care and other obstacles that force women not to have children for economic reasons.
Such a principled approach of opening up the discussion about the reality of abortion in Ireland has already had a major impact on public opinion, as proven by opinion poll after opinion poll. There is a reason why the “pro-life” lobbyists are panicking and opening their war chests to campaign in working class areas. The honest and straightforward approach of pro-choice activists, breaking the taboo of abortion and calling out the hypocrisy of the establishment, is convincing an increasing majority to back the need for Repeal.
In order to win not just Repeal, but actual abortion rights in Ireland, we need to continue to stand up for a clear pro-choice position based on women’s right to bodily autonomy. This will inspire the developing grassroots movement to grow further and give the necessary push from below to force the conservative establishment into action. It allows us to set the agenda, to point out what is needed.

No compromise with conservative establishment

On the contrary, looking for compromise by “reaching out” to conservative politicians will not work, it will allow them to set the agenda. It will land us in a dead end street where the 8th is “amended” rather than repealed or to continue to restrict abortion access along the lines outlined above. Access to abortion when the mother’s life is at risk we already have – and look where it left us.
Access to abortion in the case of rape will – in the context of a backward state, judiciary and political establishment – be extremely limited. While the reporting of rape is on the rise in Ireland, it is estimated it is still underreported by 90%. No wonder, when you look at the extremely low likelihood of prosecutions, leave alone convictions. In short, such a “compromise” is nothing short of a betrayal which could set the women’s movement in Ireland back for years.
We need to be clear and uncompromising – the constitution should not be used to police women’s bodies. We need access to abortion in this country, as part of the public health service, so women can make decisions about their own bodies, not the state or church.